The most racist commercial of all time?

UPDATED: Critics call a Mountain Dew ad racist -- but the joke could be on them 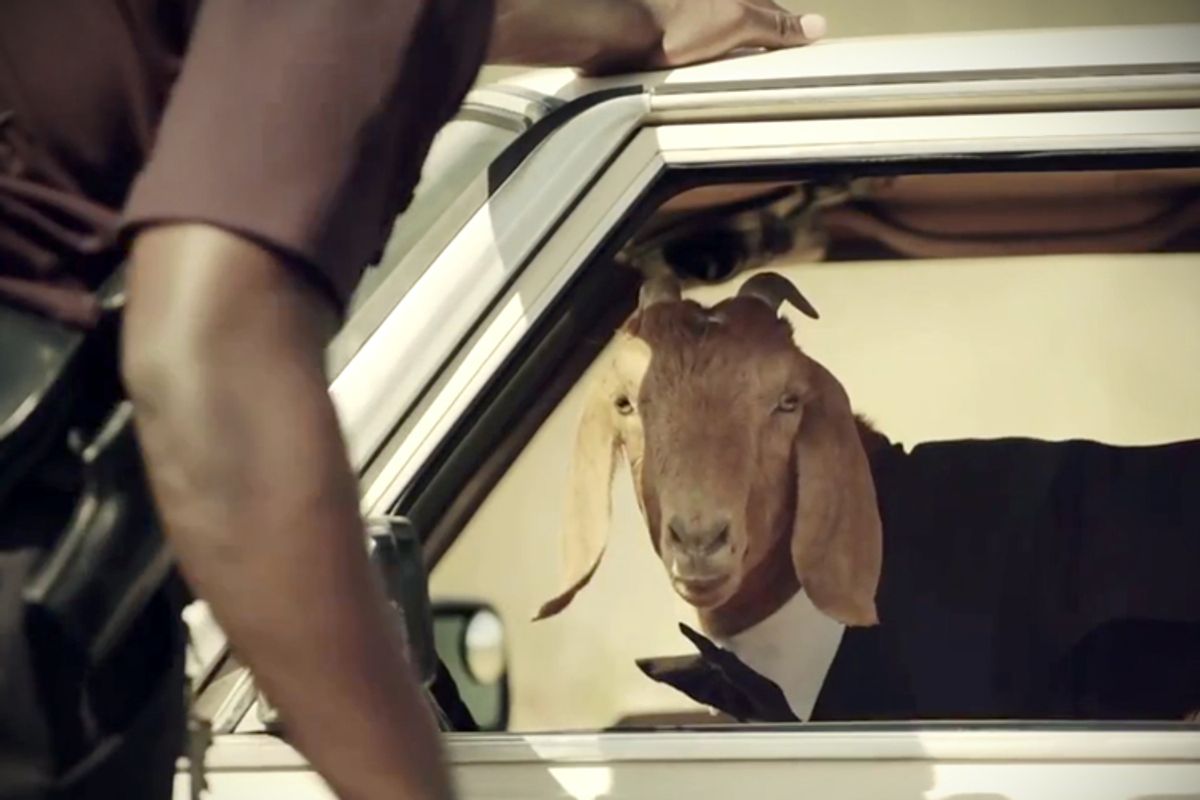 Oh, it's weird, all right. It's aggressive and provocative -- two qualities you don't usually expect from a soda commercial, but not surprising at all coming from the minds behind Odd Future. But does this new series of Mountain Dew ads actually reinforce ugly stereotypes? Or are its critics completely missing the point?

The story begins back in March, when Tyler, the Creator cheerfully announced on Twitter that "They Let My Stupid Ideas Come To Life, Thanks Dew!" He followed up by unleashing the first spot he directed – a surreal vision in which Errol Chatham finds himself distracted by a fellow restaurant patron – the "nasty," rampaging, Dew-chugging Felicia the Goat.

Now, in the third and newest spot, Felicia's terrified waitress, now bruised and hobbling on crutches, is led into a lineup at a police station. And there's the goat, flanked by a tough-looking group of young minority men. The white cop tells the blond lady to make an identification, but the goat ominously warns, "Ya better not snitch on a playa," because "snitches get stitches."

I have absolutely no idea what any of this has to do with caffeinated citrus beverages. But I do know that none of this seems unusual from a group who rode to fame on the motto "KILL PEOPLE, BURN SHIT, FUCK SCHOOL," or from a man whose lyrics express the priorities to "go skate, rape sluts and eat donuts."

But without context, the clip appears to be simply, as NBC's Los Angeles news affiliate reported, something easily "denounced as racist and misogynistic." Huffington Post more conservatively questioned whether it was "troubling." And on Your Black World, Dr. Boyce Watkins complained that it was "arguably the most racist commercial in history." "One side of the glass is mostly criminal, 100% black," he wrote. "The other side of the glass consists of the 'good guys,' nearly all of whom are white ... Mountain Dew has set a new low for corporate racism. Their decision to lean on well-known racial stereotypes is beyond disgusting. This doesn’t even include the fact that the company has put black men on par with animals."

But for fans, the whole Dew campaign is an elaborate tableau of inside references and jokes, using members of Odd Future and its offshoot Adult Swim comic ensemble, Loiter Squad. That police lineup, for example, features Odd Future cohorts Lionel Boyce and Left Brain. Felicia is a nod to Tyler's "Trashwang" lyric that he "might be" a goat -- and is voiced by Tyler himself. In an earlier Dew spot, Felicia is pulled over by a cop, played by Boyce, who uncovers a trove of Dew in the goat's trunk.

I suppose you could call the whole thing an act of corporate racism, but coming from a bunch of guys who certainly have some experience with law enforcement, it seems instead a parody of their experiences. I'm not exactly the Odd Future demographic, but even to my eyes, it sure looks like an elaborate gag about their own big bad image.

Tyler's playing with stereotypes, but he's doing it with his own creative control over the content. The messenger matters. When a bunch of doofy white dudes decide to make fun of a little African-American girl, the gag doesn't land in the same place, because it's coming from an outsider's point of privilege. Likewise, there's no social commentary in shock jocks taking on a kid with Down syndrome. Sure, maybe the average consumer shouldn't have to know about a hip-hop collective to enjoy all the subtle nuances of a soda commercial, but the Tyler, the Creator spots prove that you shouldn't automatically rush to assume everything is some evil, racist, lady-hating plot either. Before you get your knickers in a bunch, dig a little deeper and consider that maybe it's a joke – a crude one that perhaps you don't enjoy, made by a 22-year-old, but a joke nonetheless, precisely about evil, racist culture. And if you don't get it, it's OK. That goat didn't make it for you anyway.

UPDATE: On Wednesday, Pepsi confirmed to AdWeek it has pulled the spots. A representative for the company said, "We understand how this video could be perceived by some as offensive, and we apologize to those who were offended. We have removed the video from all Mountain Dew channels and have been informed that Tyler is removing it from his channels as well."