In his latest installation, Jeroen Nelemans views a suburban home through the lens of virtual technology 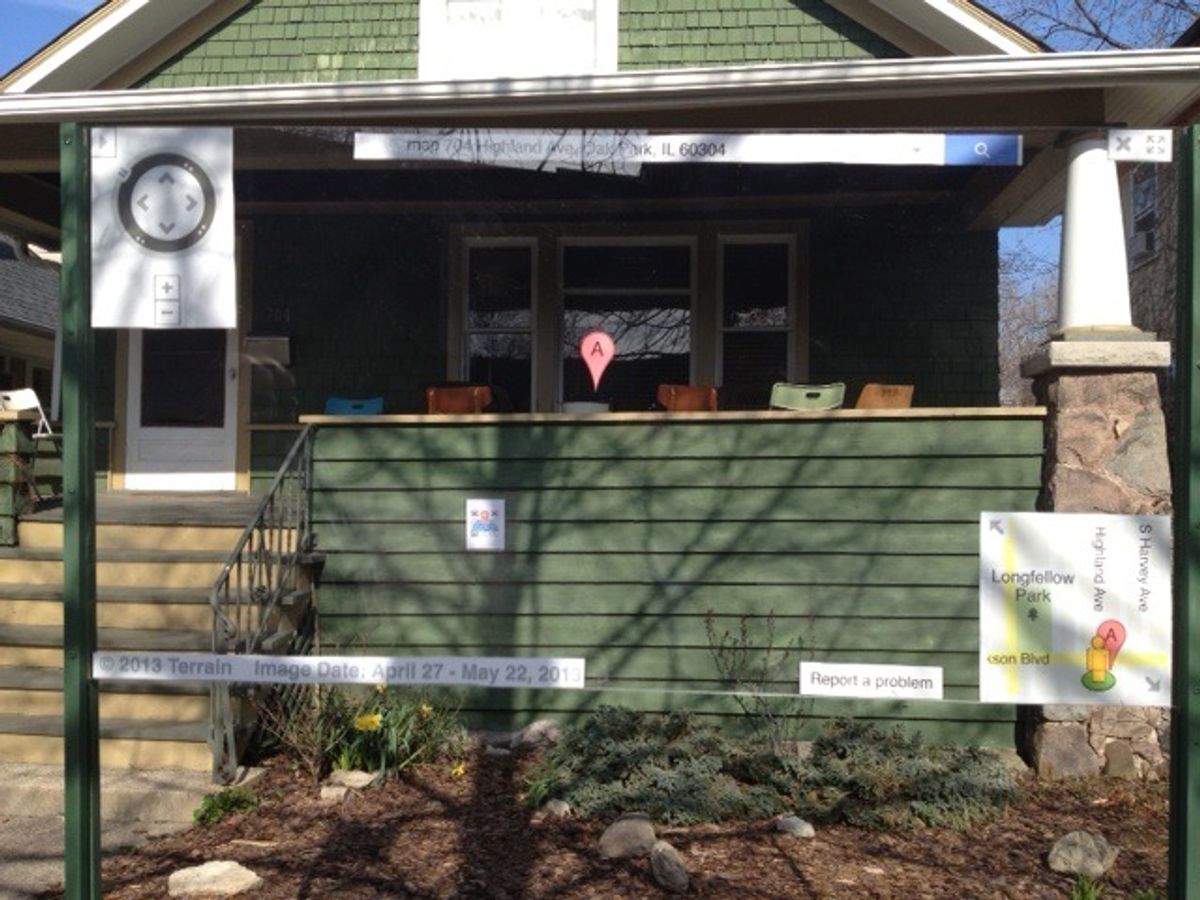 OAK PARK, Illinois — You’re driving to a suburb that you don’t know well, and you whip out your iPhone to quickly punch an address into Google Maps. In this case, that address is 704 Highland Avenue, home of Sabina Ott and John Paulett, who run Terrain Exhibitions, a once-a-month-ish, home-turned-cozy gallery experience. Every artist who shows work here must wrap it around the concept of the artist-writer couple’s home.

Recreating such a technologically mediated experience informs Jeroen Nelemans’ site-specific installation Higher Definition, on view at Terrain Exhibitions through May 22. For this work, he takes Google Earth, the global, satellite-imagery-centric cousin of Google Maps, quite literally into the living room and front yard of his house in the suburbs of Chicago. The Google Earth-inflected experience of Ott’s home-based, weekend-afternoon-only, suburban home-turned-family-friendly artist-run gallery is three fold. It’s as if Google Street View did actually move into Ott’s living room.

First, Nelemans plays with the idea of looking at the home through Google Earth on a computer monitor by installing a large piece of Plexiglas in the front yard. Google Earth icons and navigation tools are sprinkled on pasted onto the clear material; one stands in front of it and looks through to the other side, which is just the porch of Ms. Ott’s home. This experience mirrors the actual experience of what one might experience looking at 704 Highland Avenue using Google Earth. Nelemans repackages Google Earth as a physical-only incarnation of the virtual technology. This part of the installation is in fact closely aligned with the idea of making the digital ideal an analogue reality.

For the second conceptual take on Google Earth, Nelemans installs giant QR codes around the front lawn of their residence. Download the app i-nigma, snap the QR code with your phone, and you’ll be directed to YouTube — where you can view Neleman’s spliced Google Earth video of the location. The two-minute video traces the Google Earth zoom-in/zoom-out process of descending through the atmosphere onto their shingled rooftop. Splicing these opposing moments on top of one another, Nelemans creates an effect that layers the furthest view available — the Earth from outer space, with a tiny Google pindrop for the home — with a view that captures the roofing and bushes that surround the house. As the video progresses, the views continue to rotate around each other on a loop. This same video also plays on a monitor in Ott’s living room, where all are welcome to view it without the intervention of the QR code.

Nelemans, a Chicago-based artist of Dutch decent, brings a conceptual approach to exploring the same Google Earth experience through different lenses. His process mirrors the conceptual artist Joseph Kosuth’s One and Three Chairs, which the artist notes as an inspiration for this site-specific installation. This tightly curated three-part exhibition is a pleasant, slimmed down departure from his latest solo show at The Mission, which packed in so many works that it felt like a mid-career survey of the emerging artist’s work.

Nelemans’ interest in our technologically mediated experiences of the physical world first began to sprout in his solo show at The Mission, where he presented a take on light and space influenced by Google Maps. He screengrabbed images of his hometown in the Netherlands using Google Maps, and then cut laser incisions onto lightboxes to create glowing, abstract patterns that lit up like a smattering of Google Earth-curated heavenly stars. In his site-specific installation, he brings a similar, refreshingly clear sensibility and interest in the landscape, suggesting that while our technology may not simplify our approach to the natural landscape, it at least gives us more options on how to interpret and consume it.

Higher Definition is on view, from the street, 24 hours a day at Terrain (704 Highland Avenue, Oak Park, Illinois), and can be entered at the owner’s discretion on weekend afternoons.