Sure, Bush created this nightmare -- but the current hunger-strike crisis stems from Obama's political cowardice 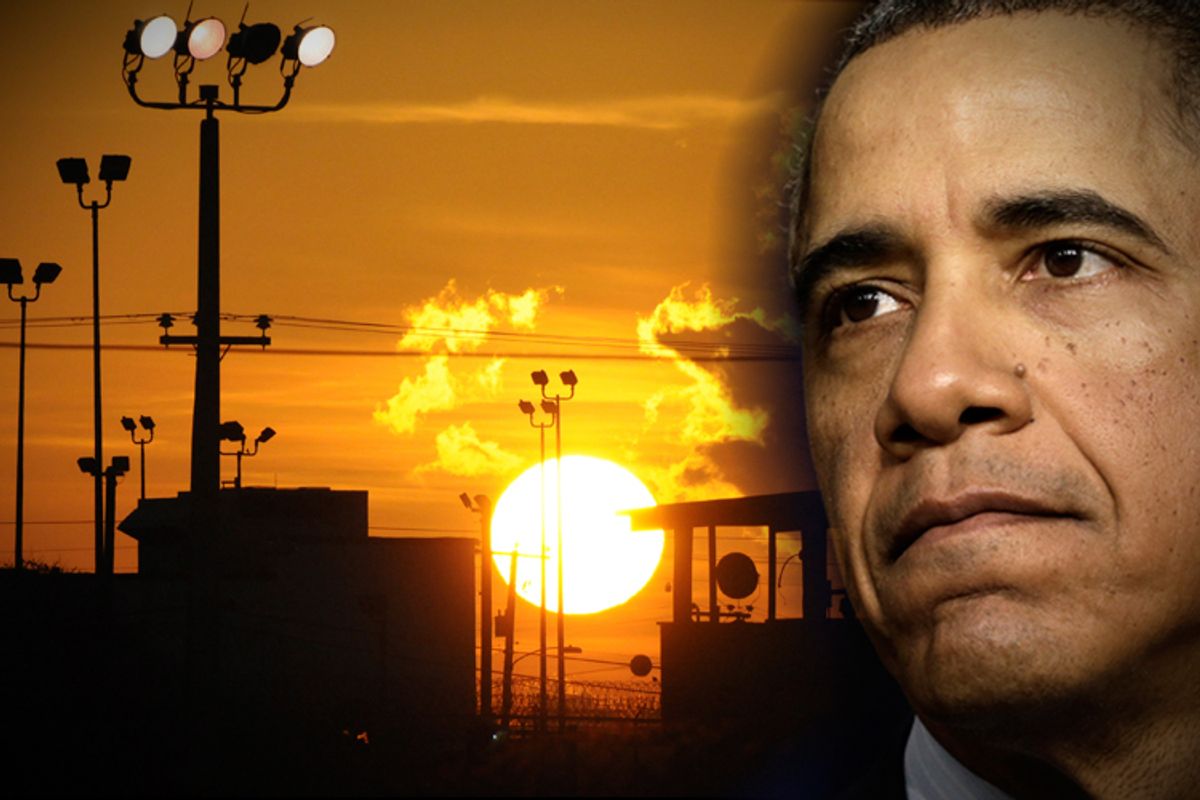 Once upon a time, in the long-ago days of George W. Bush and Dick Cheney, we may have had the worst and most abusive presidential administration in the history of the United States, but at least there was some moral clarity. You were on their side or you weren’t; you either bought into the idea that the “war on terror” was a special set of circumstances that required an immense expansion of executive power and the indefinite suspension of constitutional norms, or you didn’t. Nothing quite symbolized that division like the military detention camp at Guantánamo Bay, Cuba. It was a locked-down and secretive facility in a country that didn’t want us there, where hooded and manacled men – in theory, the most violent and dangerous anti-American militants on the planet – were kept under mysterious conditions, denied the rights we routinely accord to suspected murderers and rapists, and subjected to interrogations we didn’t want to know about.

But as details about the conditions of detainment at Guantánamo began to leak, the place began to look not just abusive and nightmarish but also bureaucratic and buffoonish. Many of those who were being held captive in those egregious circumstances were low-level foot-soldiers, or even bystanders, who’d been in the wrong place at the wrong time. Sometimes there was a quality of grim farce about the whole thing, as in Michael Winterbottom’s 2006 film “The Road to Guantánamo,” which tells the true story of a group of British men captured while on their way to a wedding in Pakistan. The men languished in Gitmo for many months, even after it was clear they had no significant connections to al-Qaida or the Taliban. Indeed, of the 779 individuals who have been imprisoned there at one time or another since 2002, more than 600 have been released without ever being charged with anything, still less convicted.

Well, thank goodness for Barack Obama, right? Even if he hasn’t quite managed to get the place closed down, as he loudly and repeatedly promised he would, at least he got all those innocent or insignificant people released! Except that’s not how it happened. The vast majority of the detainee releases – 530 or so – occurred under Bush. Under Bush's successor, Guantánamo Bay has become something that’s arguably even more disgraceful than a symbol of hyper-patriotic right-wing zealotry. It’s become forgotten, abandoned and swept under the rug. No one goes in and no one comes out. If the remaining 166 detainees at Guantánamo were originally swept up in a paranoid imperial overreach, that reaction was at least somewhat understandable. Today they are prisoners of political paralysis and political cowardice, which are inexcusable.

So it is that Obama, more than four years after signing an executive order to shut down the Guantánamo prison, found himself a few days ago mumbling defensively to the White House press corps that it might be time to “re-engage with Congress” on the issue. “It is not a surprise to me that we’ve got problems in Guantánamo,” he added. Well, it freakin’ well shouldn’t be, Mr. President. From the moment Obama became a presidential candidate in 2007, he campaigned vigorously against Guantánamo as a pillar of the flawed and failed Bush-Cheney war policy. He won the election and signed that executive order in his third day on the job, and then – once it became clear that House Republicans would be delighted to use the issue to depict him as a crypto-Muslim, terrorist-coddling pantywaist – let the whole thing drop. The rest of us, I’m afraid, mostly assumed that the right guy was in office and the right thing would be done eventually, and moved on.

But decisions made in the name of political expediency have a tendency to come back and bite you in the ass. (If Machiavelli never said that, he should have.) As the Economist put it this week, the current hunger strike at Guantánamo, which began as a small dissent movement in February and now includes most of the camp’s detainees, has shamed Obama and forced America and the world to face “one of his most glaring failures.” Military officials admit that 100 of the 166 Guantánamo prisoners are now refusing food, while lawyers and activists in contact with the detainees say the real number is closer to 130. At least 23 men in the camp are reportedly being strapped into a chair twice a day and force-fed Ensure nutritional supplement -- through a plastic tube passed through the nose and into the stomach – in order to keep them alive. Three to five others in more serious condition have apparently been hospitalized. (The Miami Herald has an online chart showing the progress of the strike, using the official statistics.)

How many of these detainees, who’ve decided they’d rather die than face indefinite imprisonment with no prospect of either release or trial, are dedicated al-Qaida extremists? It’s obviously a loaded question, and I suppose the real answer is that no one knows. But here’s what we do know: Of the 166 prisoners still at Guantánamo, 86 have been officially cleared for release, either to their home countries or somewhere else. In fact, many of those were designated for release years ago, under the Bush administration, and they are still locked up. There’s nothing close to an adequate explanation for that fact, but we can evidently blame a combination of bureaucratic inertia, excessive caution and the fact that almost no one gives a crap about a few dozen Arab and/or Muslim men who used to be suspected terrorists and now constitute a national embarrassment.

Less is known about the other 80 detainees, although Amy Davidson of the New Yorker drily suggests they can be divided into two groups: “those the Administration says it might bestir itself to bring a case against someday, and those it acknowledges it doesn’t have enough evidence against, but finds somehow unsettling.” Be that as it may, there are only six prisoners at Guantánamo who face actual charges before the government’s extra-constitutional military tribunals, one of those being Khalid Sheikh Muhammad, the alleged mastermind behind the 9/11 attacks. Carol Rosenberg of the Miami Herald has ferreted out the names of eight of the hunger-strikers who are currently being force-fed. None is charged with any crime, and four of the eight are on the list of detainees cleared for release.

As Obama is now discovering, the hunger strike is a powerful tactical weapon in the asymmetrical conflict between prisoners and their captors, who are guaranteed to look cruel however they respond. Either you order force-feeding, in blatant violation of “core ethical values of the medical profession,” as the U.S. government is doing now, or you let prisoners die, as Margaret Thatcher infamously did when confronted by Bobby Sands and the other IRA hunger strikers of 1981. Many Tories celebrated the Iron Lady’s hard line at the time, and some still do; but the 10 men who died in the Maze prison permanently tainted Thatcher’s reputation and sparked a worldwide wave of sympathy that hastened the conclusion of the Northern Ireland conflict. Obama is obviously trying to avoid any such outcome, but he has been warned -- by former Guantánamo prosecutor and retired Air Force colonel Morris Davis, among others -- that sooner or later a hunger striker will die on his watch if the facility is not closed.

I can hear liberals protesting that Thatcher deserved the disgrace of the ’81 hunger strike (captured, in impressionistic fashion, in British director Steve McQueen’s remarkable film “Hunger”) whereas Obama inherited a situation not of his own making. At best, that’s a half-truth, and mostly it's a cop-out. Yes, it’s undeniable, if profoundly disturbing, that Guantánamo still plays well as a symbol of American virility with the most jingoistic elements of the Republican base. The House GOP has repeatedly thrown roadblocks in the president’s path, denying funds to transfer detainees to domestic prisons or send them home. But until now Obama has avoided displaying any moral authority or expending any political capital on the issue, apparently calculating that it was easier to let the grievous wound of Guantánamo fester than to treat it. In terms of the long arc of history and posterity, the hunger strikers are doing him a favor.