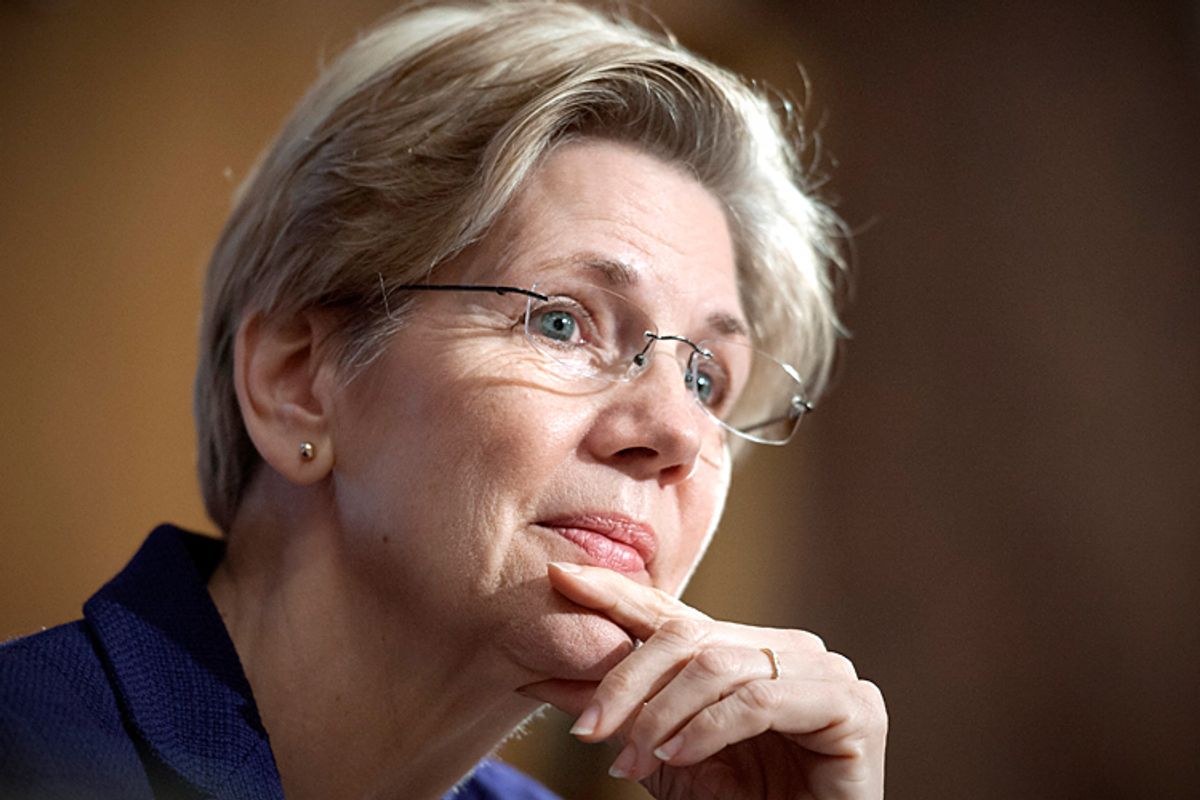 “The U.S. government invests in big banks by giving them a great deal on their interest rates,” freshman Sen. Elizabeth Warren said in an interview with Salon on Wednesday afternoon (the transcript of which is below). “We should make at least the same investment in our students.”

Warren was discussing the first bill she has introduced in the Senate, a plan released on Wednesday to address the crisis of outstanding student debt – which topped $1 trillion this year, with over 37 million Americans owing thousands of dollars in higher education costs that could take decades to pay back.

Student debt is now the second-highest form of debt in America – behind only mortgage debt – with the number of borrowers and the average balance increasing 70 percent since 2004. Research from the New York Federal Reserve Board indicates that this has begun to have an impact on the broader economy, with young people burdened by student debt more reluctant to take out auto or home loans. And without congressional action, this will get worse: on July 1, interest rates on federally subsidized Stafford student loans will double, from 3.4 percent to 6.8 percent. This will effectively raise costs for 8 million student borrowers by $1,000.

President Obama’s budget proposal would set subsidized student loan rates at 1 percent above the interest rate it costs the Treasury Department to borrow money for the U.S. government. But a variable rate without a cap would come back to haunt students when interest rates rise again. Another proposal would simply freeze the current rate of 3.4 percent, and would institute a plan limiting payment to 10 percent of income over a 10-year period.

Warren’s plan takes it a step further. For the next year, she would reduce the subsidized student loan interest rate to the same rate that America’s largest banks pay to borrow money from the Federal Reserve at the “discount window.” Currently, banks pay a minimal 0.75 percent to borrow from the Fed, one-ninth the rate that students would pay if Congress fails to act by July 1. Under the plan, the Federal Reserve would give the Department of Education the funds necessary to equalize those rates.

This one-year stopgap, while Congress works on a permanent solution, would solve several problems. In the near term, it would save money for students, perhaps relieving some of the burden that has led them to scale back their purchases and threaten overall economic growth. In addition, the Federal Reserve has a stated policy of lowering interest rates to spur economic activity, known as quantitative easing, but they have had difficulty extending the benefits of QE beyond Wall Street and the wealthy. Fed Chairman Ben Bernanke admitted as much last February, noting in a speech that while QE has helped housing and stock markets, difficulty in obtaining mortgage credit has meant that “the strong actions taken by the Federal Reserve … have had less effect on the housing sector and overall economic activity than they otherwise would have had.” If the Fed is looking for ways for Main Street to benefit from cheaper borrowing rates, they could hardly endorse a more appropriate policy than lowering student loan interest rates in the short term to what they give out to big banks.

In her interview with Salon, Warren noted that the federal government profits from student loans. The Congressional Budget Office estimates that the government will make $34 billion in 2013, in fact. Aside from that, the investment in helping a young person afford higher education is massive in terms of their future earnings and even overall economic growth. Evening out student loan interest rates and big bank discount window interest rates simply expresses the notion that educational opportunity is as crucial to the overall economy as a strong financial system.

As expected, bank lobbyists are unhappy with the proposal, particularly the idea that “short-term” discount window loans in a time of crisis are irrelevant to student loans. Of course, many economists, including the New York Fed, believe that student debt is reaching crisis proportions. And banks have relied on that “emergency” cheap money for years. Indeed, Goldman Sachs and Morgan Stanley turned themselves into bank holding companies in 2008 expressly to get access to the discount window. As Mike Konczal argued in 2011, there’s no reason why the future leaders of America couldn’t get the same kind of “deathbed conversion.”

House Republicans stepped back from the brink in 2012, when the subsidized loan rate was set to double, patching it for a year. They could do it again, and Warren’s plan would go even further. Salon discussed the proposal with Sen. Warren by phone today, including her plan to get it passed.

So this is a one-year plan?

It's a one-year plan to give Congress time to work out a permanent solution.

And would this be your permanent solution?

Yes! Look, the U.S. government invests in big banks by giving them a great deal on their interest rates. We should make at least the same investment in our students.

So is this like a Quantitative Easing program for Main Street?

I like that, yes. The one way it's different, though, is that it's highly targeted. But it does link up; the Fed came out with a study in March saying that student loan debt threatens our shaky recovery. Student debt has a powerful impact on household spending. So this is about students, but it's also about our economy.

What about the idea that offering cheap student loans contributes to rising college costs, because if a student can defer the cost they won't care about the price?

You're asking exactly the right question. The problem of rising college costs is part of a bigger conversation and a bigger fix. Today's proposal is about protecting our students. So you're exactly right about the problem. That's just going to take a heavier lift to get to the right place. Bringing down student interest rates doesn't fix all the problems with higher education, but it helps our students now. We should not hold students hostage to solve bigger questions.

Any co-sponsors on the bill yet?

Nope, not yet. This is my first stand-alone.

So what's the plan to get this passed, while this sword of Damocles, this doubling of the interest rate, hangs in the balance, with a deadline of July 1?

This is grass-roots federal legislation. The plan is to mobilize as many students as I can, get them to talk to their senators and representatives. When we think about how do we get bills through Congress, we have to open up the conversation. We want students to be part of this, not to have other people making decisions for them. That's why I'm talking to Salon, to get the word out for this. So a student can call their representative and say, we deserve the same break that big banks get. Why does America invest in big banks but charge us nine times more? That's going to be a powerful message. If they do that, we can build support and win.

I imagine there's going to be some education needed here, around bank lending?

Well, this one's a pretty simple bill. The federal government lends money every single day to big banks at 0.75 percent interest. All I'm asking for here is that the government should float money to the Department of Education to lend the money to students.

So this isn't direct Fed lending to students?

No, it's not like students line up at the discount window. It’s funny that we still call it a window, isn’t it? But no, the Federal Reserve floats the money to the Department of Education.

Last time this was done, Republicans agreed not to double the rate, but there was an offset, a way that they paid for the cost to the government.  Is there an offset here?

The financial treatment should be the same as there is for the big banks now. Lending to big banks is not on budget. In fact, there's a subsidy going on from the American taxpayer to the big banks. Why should banks get it while students are asked to pay nine times more? And the other part of this is that the federal student loan program is profitable. For every dollar invested in the student loan program, the U.S. taxpayer makes another 36 cents. That's pretty amazing. So we can do this without burdening the taxpayer in the process.