"The Great Gatsby": Debauchery in Disneyland

Baz Luhrmann's delirious 3-D fairy tale lurches from breathtaking to awful. But wait -- isn't it based on a book? 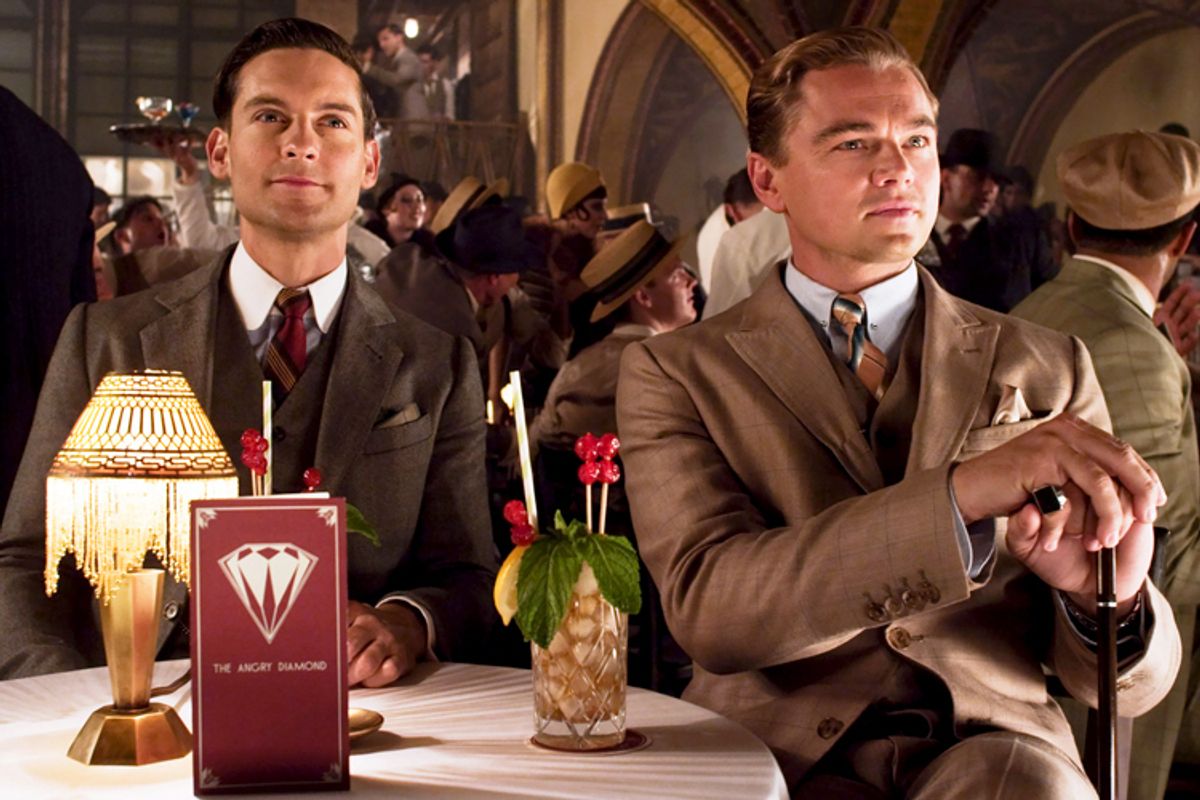 All novels take place in the imagination rather than the real world, and F. Scott Fitzgerald’s “The Great Gatsby” is a particularly delicate balance of realism and fantasy, entirely filtered through the literary consciousness of its narrator, Nick Carraway. But that doesn’t mean it should seem entirely imaginary, which is one way of explaining the problems with Baz Luhrmann’s spectacular but oddly uninvolving new film version. “Gatsby” has long resisted successful big-screen adaptation, not least because of Fitzgerald-as-Nick’s famous poetic reveries – which are mostly extraneous to the plot – and because of its ambiguous mythic or fairy tale quality. Luhrmann embraces those elements with gusto (perhaps too much so) and creates a larger and more ambitious screen “Gatsby” than has ever been seen before. That doesn’t turn out to be the answer either.

This “Great Gatsby,” a long-brewing project from the mad Aussie genius behind “Moulin Rouge!” and the film that was released under the unfortunate title “William Shakespeare's Romeo + Juliet,” was shot in “native” 3-D (meaning it was not converted in post-production) and features digital effects on a staggering scale, including immensely detailed virtual re-creations of 1922 Manhattan, Queens and Long Island. Every rosebush and patch of green on the ginormous fantasy-land estate of the mysteriously rich Jay Gatsby (Leonardo DiCaprio) stands out in brilliant, beautiful fakeness. The water in Gatsby’s never-swum-in swimming pool and the adjoining bay are a heart-stopping blue; the famous light at the end of Daisy Buchanan’s dock is of course a piercing emerald in the mist. As for the dreamlike production design of Gatsby’s enormous, bacchanalian parties – which intentionally suggest every era of debauchery from the Roman Empire to the Weimar Republic and beyond – Luhrmann is in his element. Movie stars swan, showgirls jitterbug and politicians and captains of industry trade the wet, sloppy kisses of corruption; the camera climbs toward the ceiling and then dives through the howling throng, while you can almost hear the Mephistophelean laughter behind it all.

Whether or not Luhrmann’s “Gatsby” will go down in history as a legendary flop is not for me to judge (though all signs currently point toward yes), but it surely belongs to the category of baroque, overblown, megalomaniacal spectacles dubbed “film follies” by longtime Nation film critic Stuart Klawans. (Erich von Stroheim’s “Greed” and Joseph L. Mankiewicz’s “Cleopatra” being two of the most famous examples.) Early in the film, before Tobey Maguire’s Nick Carraway, an aspiring writer turned Wall Street bond salesman, has even met Jay Gatsby, he winds up at a boozy party in a cheap, loud and unbelievably vulgar New York apartment where Tom Buchanan (Joel Edgerton) holds his extramarital liaisons. In Nick’s account, it’s only the second time he’s ever drunk alcohol, and the entire sequence is an out-of-body mini-masterpiece that blends sex, jazz and liquor – the great trifecta of the Roaring ‘20s – into a potent cocktail that kicks like a horse.

But like almost everything else memorable about this “Gatsby,” that exhilarating and troubling scene has almost nothing to do with the so-called plot, or with the human relationships that are supposedly most important. It is as close as Luhrmann ever gets, however, to what I take to be Fitzgerald’s central thesis: That the American dream has always had two faces, and what is noblest in it is also, simultaneously, what is falsest and most delusional about it. (Our greatest indigenous art form, jazz, was nurtured in the whorehouse; our greatest writers have been misogynists and drunks.) That paradox is meant to be embodied in the person of Jay Gatsby, of course, but in DiCaprio’s overly suave, overly sleek, borderline-repellent performance Gatsby just comes off as a giant phony, and far too literal-minded a metaphor. Luhrmann’s movie conveys meaning far more effectively when it has no story, no characters and virtually no text, and is all spectacle. As a visual-musical rhapsody on the themes and settings of “The Great Gatsby” – partly composed by George Gershwin and partly by Walt Disney – Luhrmann’s movie is a memorable accomplishment. As an adaptation of Fitzgerald’s novel, it’s depressingly leaden.

Luhrmann and co-writer Craig Pearce have clearly grasped that Fitzgerald’s novel contains elements of what we might today call magic realism, except that in their version the “realism” gets left out. That famous early scene when Nick and Tom walk into the parlor in the Buchanan house where Nick’s cousin Daisy (Carey Mulligan) and her friend Jordan Baker (Elizabeth Debicki) are lazing on couches amid fluttering white draperies – and Nick gets the impression they’ve been flying around the room – is rendered in wonderful style. Too bad Daisy, the supposed femme fatale of Louisville and motive force behind Jay Gatsby’s rise from obscurity, turns out to be an insipid and superficial creature, free of powerful magnetism or other redeeming characteristics. Similarly, the screenplay introduces DiCaprio as Gatsby startlingly late in the film and then gives away his secret almost immediately – it’s almost as if this were a radical rewrite suggesting that Gatsby’s a fake who’s barely worth knowing, and that the real story lies elsewhere. But where?

No doubt it’s artistically defensible to set this movie in a fantasy universe that seems completely divorced from the real America of 1922 or any other year. The fictional Long Island communities of West Egg and East Egg are rendered less as parodies of New World wealth than as storybook settings for the palaces of fairy princesses; Gatsby’s house, which would strike Charles Foster Kane as excessively large and vulgar, resembles nothing so much as the Sleeping Beauty Castle in Disneyland. I’m not suggesting that any of this is accidental or unintentional; as the gauche but awestruck Nick repeatedly observes, Gatsby’s estate reminds him of an amusement park. I’m merely wondering what in hell the point is, since Luhrmann has driven out both the distinctive elements of American social and moral criticism and the convincing or alluring love story, and replaced them with weird, bitter-tasting eye candy.

I felt no emotion toward DiCaprio’s Gatsby beyond a vague irritation (even his passion for Daisy feels unbearably juvenile), and in this telling the narcissistic and/or homoerotic love Nick feels for him seems only to expose the latter as a hapless rube. From the moment we meet the notorious gangster Meyer Wolfsheim (played, for some reason, by Bollywood star Amitabh Bachchan), the nature of the relationship between him and Gatsby is clear. No one else in the movie is particularly interesting or convincing either: Joel Edgerton is a big, physical bruiser whose accent and manner are all wrong for the old-money, polo-playing Tom; and while Debicki has the right look for Jordan, Nick’s androgynous, golf-playing semi-girlfriend, there’s barely a hint of personality. Almost the only actor who stuck with me was Isla Fisher as Myrtle Wilson, the working-class Queens girl whose affair with Tom has a fateful aftermath; she plays it as broad caricature, but at least it’s funny.

Simply as a torrent of images and visual ideas – often magnificent and just as often idiotic – “The Great Gatsby” is a phenomenon not to be missed. Some of it is breathtakingly misguided, like the horror-movie framing device involving Nick in a snowbound mental hospital telling the amazing story of Jay Gatsby to his shrink. (I am totally not kidding!) And some of it reeks of blatant desperation, as when Fitzgerald’s most famous passages are not merely read aloud by Maguire, in overdone Midwestern-ese, but also appear on the screen as Nick types them: “So we beat on, boats against the current,” clickety-clickety-clack. So we won’t miss the literary greatness, I guess.

Mind you, the consensus-choice Greatest American Novel really is a tremendous book, soulful, cynical, innocent and heartbreaking in ways that evidently do not translate easily to cinema. Luhrmann’s bizarre and extravagant misfire will grab the headlines, be debated for a week or two (I’m confident someone is now preparing a vigorous defense) and then claim its own peculiar page in pop-culture history. But it isn’t “The Great Gatsby,” any more than is the lost 1926 silent version that no one will ever (apparently) see again, or the faithful but dull Robert Redford version from 1974. (Or the half-dozen or so other stage, screen, radio and – really! – video-game adaptations.) Not everything has to be a movie! This fragile masterwork probably never will.