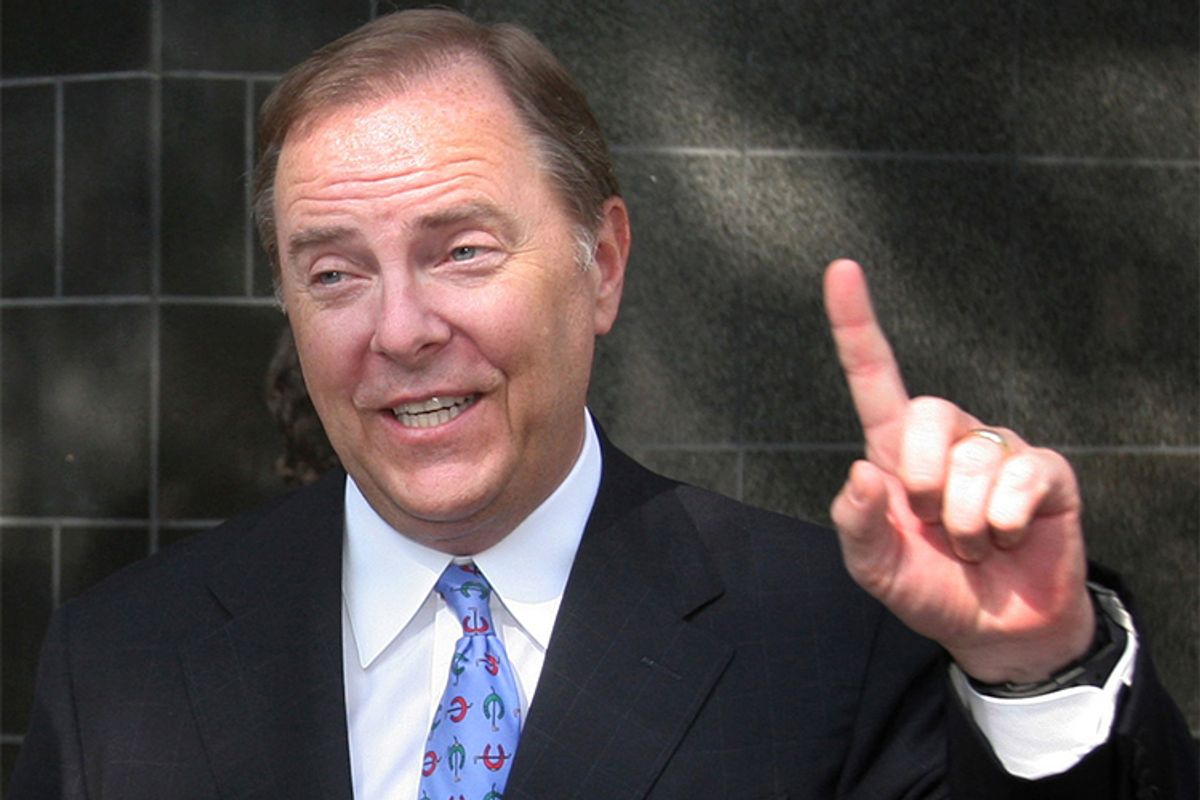 This is the envelope-pushing precedent being set by the Justice Department in its dealings with convicted Enron executive Jeffrey Skilling - a.k.a. one of the hucksters whose rip-off schemes were responsible for, among other things, losing more than $2 billion of retirees' pension funds.

In a revised sentencing agreement announced late last week, federal prosecutors cited the "extraordinary resources" required to litigate Skilling's appeals as justification for reducing his sentence by more than 10 years. NBC News reports that in exchange, "Skilling would give up all of his remaining rights to appeal" and "he also would give up any claims to the $40 million he was ordered to forfeit" to the Enron victims fund. Reuters notes that such a sum - which will be handed over to a "depleted" victims fund - "pales in comparison" to the "$70 million Skilling has spent on legal fees."

In two ways, the circumstances of Skilling's settlement show both the old and new double standards that plague America's criminal justice system.

First and foremost, the case exemplifies the ancient-yet-still-deplorable double standards in how the system tends to treat rich defendants and poor defendants.

To see this particular double standard at work, consider the fact that, as Forbes reports, many of Skilling's victims don't support the settlement, even if it means recovering a tiny bit amount of money they lost. Then consider the fact that, as Businessweek notes, "There’s a good chance (the judge) will impose the minimum sentence under the deal in spite of victims’ objections." Why? Because according to Jim DeVita, the white-collar defense lawyer who defended Tyco CEO Dennis Kozlowski, the judge will see no threat of a repeat crime (emphasis added):

"In a case of this nature, even though it involved the significant and monumental collapse of a company, 14 years is probably enough," DeVita said. “For someone like Mr. Skilling, the likelihood of recidivism is nil -- 14 years is more than enough to deter someone from doing that again."

These rationales, of course, are rarely cited as justifications to reduce the sentences of poorer, lesser-resourced thieves, most of whom didn't steal nearly as much as Skilling and his Enron cronies. As Rolling Stone's Matt Taibbi recently documented, petty thieves are in many cases put away for life - and because they don't come from Skilling's economic station, you rarely hear of them having their sentences reduced on the grounds that "14 years is more than enough to deter someone from doing that again." In other words, such a benefit of the doubt tends to correspond to the financial and demographic profile of the particular convict - not to the gravity of the economic crime in question.

Just as troubling as the old rich/poor double standard is the brand new one at work - the one whereby prosecutorial decisions are now explicitly contingent on the perceived financial power of defendants.

In this case, federal prosecutors are reducing jail time for a convicted criminal specifically because, while at Enron, that criminal managed to pilfer enough personal resources to fund legal challenges that make his continued incarceration very expensive for the government. Skilling has been empowered to make such challenges so costly for the government thanks to one of the many recent Supreme Court rulings that has helped rig the legal system for corporate executives.

The result is that Skilling is being effectively deemed Too Big to Keep in Jail - a classification in which the government cites economic cost rather than exonerating evidence as a basis for prosecutorial leniency.

If this seems eerily similar to what we saw a few months ago with the Obama administration's refusal to prosecute HSBC, that's because it is. Just as the Justice Department back then cited potential economic fallout as a rationale to avoid prosecuting Wall Street lawbreakers (Too Big to Jail), we see today prosecutors citing financial costs as a rationale to reduce Skilling's prison time (Too Big to Keep In Jail).

Ultimately, that contributes to the larger movement that is gradually normalizing a radical jurisprudential posture - one whereby justice is no longer blind to anything other than lawbreaking and does not "have but one scale and weight for rich and poor," as William Penn put it. Instead, Lady Justice's blindfold is being removed and the criminal justice system's actions are now determined by the theoretical economic consequences of applying the law.

Beyond the sheer unfairness of such a principle is the moral hazard it creates.

Through legal principles like Too Big to Jail and Too Big to Keep in Jail, the government is now telling criminals (and potential criminals) of means that they have little to fear in breaking the law. Should such principles be allowed to continue unchallenged - and continue to be proudly broadcast by the government - America will be removing one of the key deterrents to white-collar crime. That's not merely unfair - catastrophes from the Enron scandal to the 2008 financial meltdown have taught us that it is also incredibly dangerous.