There will never be another Barbara Walters 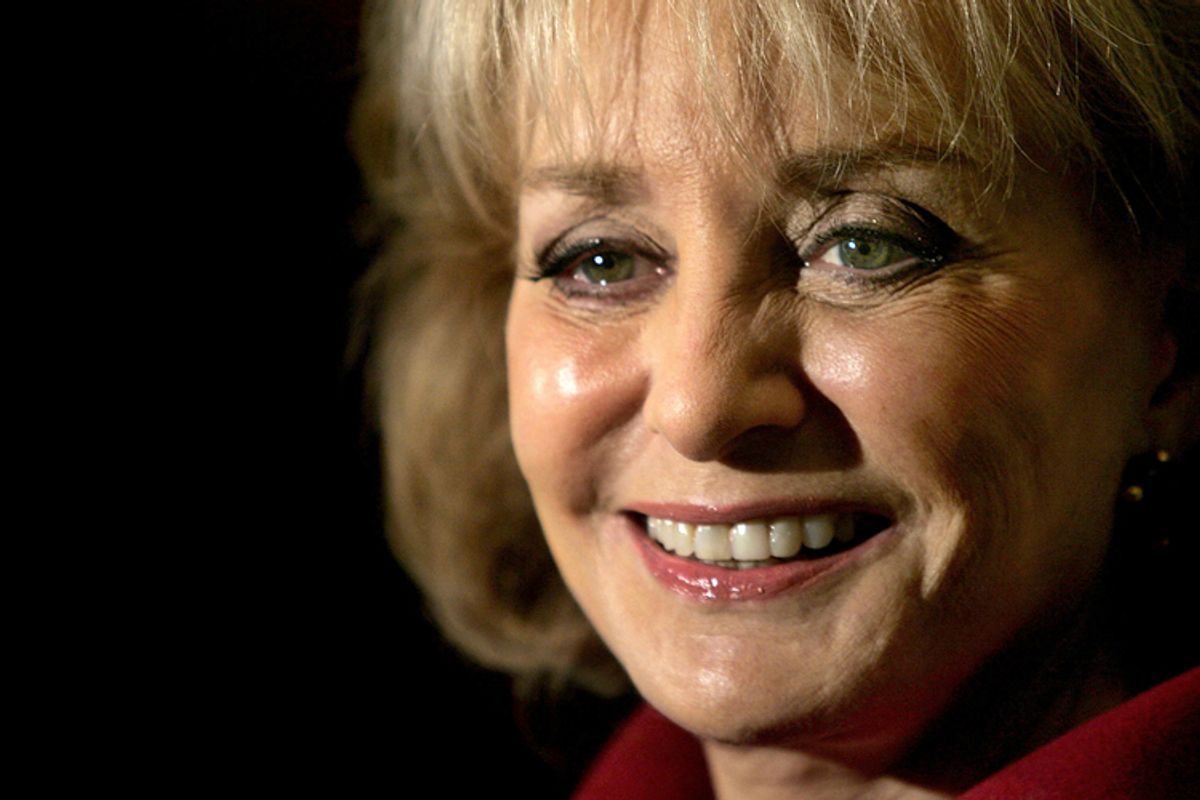 Barbara Walters is ready for a different view -- but not just yet. On Monday, the 83-year-old newswoman officially announced that she will retire in 2014.

"I do not want to appear on another program or climb another mountain," she explained in a weekend statement. "I want instead to sit on a sunny field and admire the very gifted women — and OK, some men too — who will be taking my place." But Barbara Walters, if nobody's managed to take your place yet, what makes you think it'll happen now?

Walters, a woman who was being parodied on "Saturday Night Live" before a large segment of her current audience was even born, is one of the most durable – and polarizing -- figures in television journalism. Her career is defined by the word "first." She was the first female co-host of the "Today" show and the first female nightly news co-anchor. In 1976, she made worldwide news – and single-handedly reset America's sense of a woman's worth -- by negotiating an unprecedented $1 million a year salary. And at 70, an age that would be utterly respectable for a television personality to pack it in, she co-created "The View," providing viewers with a seemingly endless supply of backstage dramas, water-cooler moments, and, frequently, flashpoints for serious conversations about race, sexuality, class, crime, men and women.

And because she was first, in nearly everything about women in television news, she has had an indelible influence on all those who've followed in her path, a path that is still undeniably harsher for women. One need only follow Katie Couric's trajectory from beloved "perky" morning co-anchor to beleaguered evening news talking head to daytime talk show host to see the Walters script, played out again in a new generation. And one need look no further than the past year on the "Today" show – and the saga of a woman who was reportedly eased out because she displeased her male co-host -- to see how far we have yet to go. Walters may have been first; what's depressing is how bumpy the path she forged remains.

The Walters of today plays the television role of well-heeled matron, marveling at the fame of Honey Boo Boo and busting up spats on "The View." She is at this point television's rich old auntie, a little out of touch but still able to class up the place, Lucille Bluth with a microphone.

But what she leaves behind is a ferociously powerful, maddeningly unduplicated example. She's a woman who's out-earned many of her male counterparts and been unashamed and unapologetic about her aspirations. She's never played soft and fuzzy to get ahead -- she's copped to affairs; she's rarely deployed the sympathetic mom card. She's never seemed to care about her relatability, and in the process, by the way, she's nabbed some of the most sought-after stories and interviews of the past half-century.

You don't like her? I seriously doubt she gives a toss. She's here to do a job, and do it her way. And if television news is still frequently a hollow, sexist echo chamber, don't blame Barbara. She showed everything that's possible for a woman of brains and ambition in an industry that has little use for women with either. She was always the first -- what's astonishing is how even now, she still remains, in so many ways, the best.