"Star Trek Into Darkness": Who made J.J. Abrams the sci-fi god?

These are the voyages of the -- oh, the hell with it! Let's blow some stuff up and chase a generic supervillain 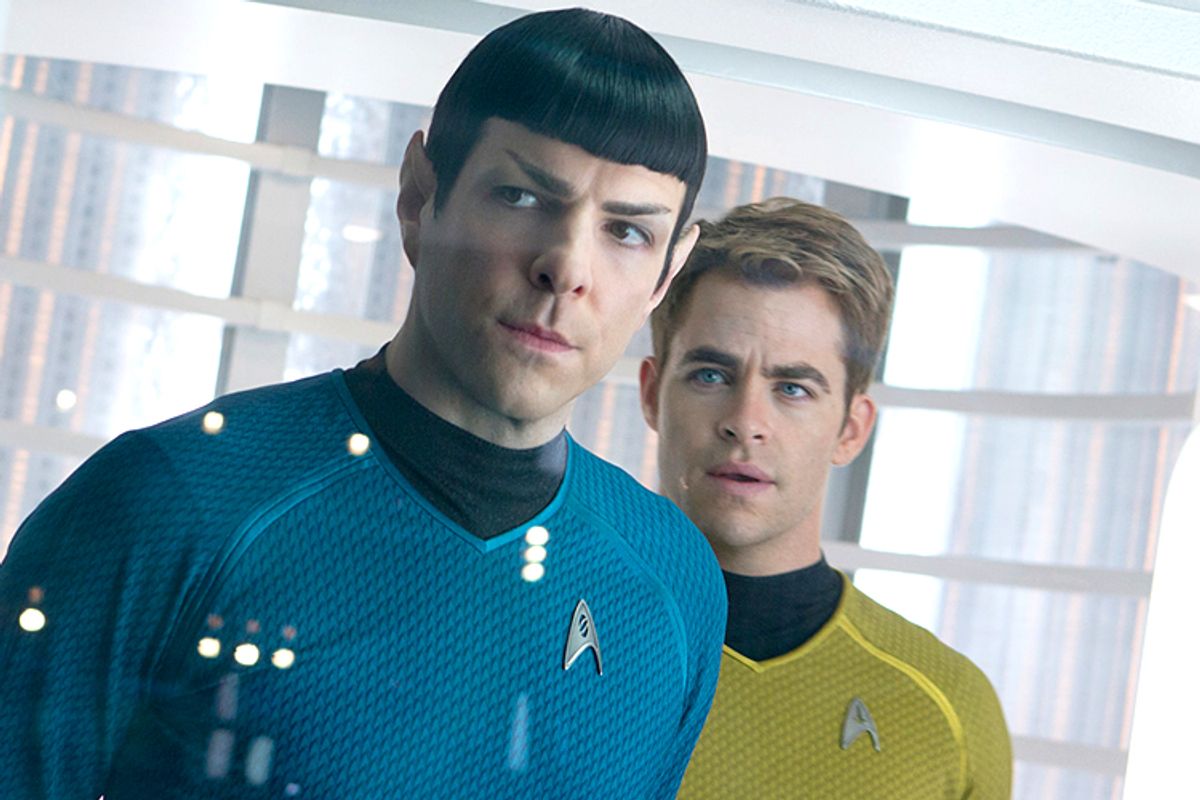 Apparently I missed the papal conclave. Not the one with Pope Francis and the Argentine torture scandals; I heard about that. I’m talking about the high-level secret meeting in the super-secret sub-orbital space fortress where J.J. Abrams was elected sole curator, conservator and monarch of three generations’ worth of nerdy pop culture history. Seriously, people, how does one guy end up in charge of both the “Star Trek” and “Star Wars” reboots? Give me a break! Isn’t that kind of nuts and megalomaniacal and wrong and just too much of the same flavor of peppermint hazelnut chip ice cream from that one summer in Connecticut, when “Alligator Woman” was on the radio every single day? (We can discuss this another time, but if I could create a world in which Joss Whedon had taken on “Star Trek,” and given Abrams the freakin’ “Avengers,” I’d do it in a heartbeat.)

I’ve got nothing against J.J. Abrams. He’s got verve and enthusiasm and considerable technical ability, and amid the hackwork that underlies so much of big-budget film and TV that stands out. I have generally enjoyed his work over the years, although if you pressed me I’d probably express the snobby opinion that it’s all been very slightly downhill since “Felicity” and “Alibi.” I thought about becoming a big fan of “Lost” and sort of meant to, but then I noticed that I wasn’t getting any younger and there were lots of other things to pay attention to, and also that the show had patches of remarkable dumbness. “Super 8” was super fun, two summers back, but also conveyed the odd sensation that Abrams lacked any artistic personality of his own, so he had flayed Steven Spielberg and was wearing his skin, like an Aztec sacrificial priest.

But if you’re a fan of either “Star Trek” or “Star Wars” or both, you don’t need me to deal you that they’re very different universes with divergent and often warring realms of fandom. (You “both” people: What the hell is wrong with you? Are you Episcopalians? Do you use both Android and iOS, depending on day of the week? Do you root for both the Yankees and the Red Sox, because both cities are kinda cool?) Abrams’ infamous comments that he was never much of a “Star Trek” fan – “It always felt too philosophical to me,” he recently told Jon Stewart – made it seem as if he’s been using the second-most-popular science-fiction franchise of all time as a placeholder, while waiting for the gig he really wanted, the one without all that boring philosophy, to open up. Next up, Abrams plans remakes of “Jaws” and “The Godfather” and “Midnight Cowboy” and “The Exorcist,” all made slightly too jovial and with gratuitous lens-flare. (OK, that’s not true, at least not yet.)

So that’s an admittedly long-winded way of working my way around to the question of what’s wrong (and right) with “Star Trek Into Darkness,” Abrams’ splashy and largely agreeable mega-budget sequel to his 2009 “Star Trek” reboot. As “Trek” buffs already understand – and have furiously debated for the last four years – this reboot features Mr. Spock (Zachary Quinto, who is terrific) and Capt. Kirk (Chris Pine, who is, um, not terrific) but is set not in the universe of Gene Roddenberry’s original TV show and subsequent films but in an alternate timeline often dubbed the “Abramsverse” (though in fact it’s mostly the work of screenwriter Roberto Orci). This alternate universe features many of the same characters and a roughly similar reality but all kinds of stuff is different and wildly inconsistent, from the size of the starships (many times larger) to the existence of many previously unknown alien races to the fact that Jim Kirk can drive a stick-shift. (You think I’m kidding!) If you’re really interested, go study the intensely detailed work of Bernd Schneider at Ex Astris Scientia, but I can summarize: The Abramsverse is considered canonical by hardcore fans only because they have no choice; it's “Trek”-flavored, but largely made-up and WTF.

To extend the metaphor still further, the Abrams “Star Trek” movies feel as if they didn’t just depict an alternate universe but were created in one – a universe in which the original “Star Trek” was an action-adventure Marvel Comics title rather than a geeky, Enlightenment-saturated 1960s TV series. Start with that idea, and you can make sense of almost everything about “Star Trek Into Darkness.” There are the pumped-up, gym-toned physiques of Kirk, Spock, Lt. Uhura (Zoe Saldana) and everybody else, and the cutting-edge synthetic fabrics that make the whole thing resemble a 23rd-century workout video. There are the often spectacular and just as often nonsensical CGI outer-space action sequences (I saw this in IMAX 3-D, and it looked terrific). There’s the dumbed-down dialogue – not Spock’s, in fairness -- and the incoherent scheming of Benedict Cumberbatch’s super-soldier ultra-villain, a compelling presence who turns out, depressingly, to be kind of an idiot.

Yes, it’s true that Abrams and writers Orci, Alex Kurtzman and Damon Lindelof have reinvented one of the most feared and revered villains from the original “Trek” universe, and have also worked a neat inversion on a key plot twist from the most beloved of the “Trek” movies. (Let’s leave it there for now, shall we?) There are references and in-jokes aplenty for “Star Trek” fans, but let’s be honest: That’s probably 10 percent of the target audience, and “Star Trek Into Darkness” never even tries to feel like an “old-continuity” “Trek” fiction. This is a brawny, mass-audience, popcorn-transmission vehicle, pretty much in the vein of Whedon’s “Avengers” and Shane Black’s “Iron Man 3,” and possibly not quite as successful as either. It’s made with verve and gusto – some of the outer-space shots are among the most beautiful to be found in the genre -- and an entirely predictable formula. It throws in a few winks at the “Star Trek” nerds in the same obligatory way it slaps a veneer of post-9/11 apocalyptic sobriety on its plot. (I’m getting pretty sick of that one, honestly.)

After an eye-popping but ultimately irrelevant prelude in which Kirk violates the Prime Directive in order to save Spock from the crater of an erupting volcano, and suffers a temporary career setback, Starfleet offices in London and San Francisco – which evidently have crappy security or none at all -- come under attack from the renegade secret agent played by Cumberbatch. After a lot of action-movie roaring and smirking and blam-blam-blam, Kirk gets his captain’s chair back, and heals his rift with his overly honest Vulcan senior officer, but only because Starfleet’s commander, Adm. Marcus (the leathery Peter Weller) is sending them to the Klingon homeworld armed with a bunch of super-secret photon torpedoes – all to kill one guy at the risk of starting a catastrophic war. Cough-cough-Osama-cough.

There’s a lot of good material in the excitingly paced first half, especially the “Starship Troopers”-style suggestion that the Federation is being perverted into an expansionist military empire while its citizens aren’t paying attention. Hmm, where'd they come up with that crazy idea? Production design never fails to look great, but the plot switchbacks become increasingly obvious as the movie plods on, and despite Cumberbatch’s abundant charisma the writers deliberately avoid twisting the character’s samey, invincible, permanently pissed-off supervillain-ness in any interesting directions. One of the biggest differences “Trek” buffs have noted between the Abramsverse and the “Prime Universe” is the disappearance of moral cost and consequence (as in the destruction of Vulcan in the 2009 film). Here we see an enormous terrorist attack, many times bigger than 9/11, which comes and goes as a plot element and is mentioned again.

There’s absolutely nothing wrong with “Star Trek Into Darkness” – once you understand it as a generic comic-book-style summer flick faintly inspired by some half-forgotten boomer culture thing. (Here’s something to appreciate about Abrams: This is a classic PG-13 picture, with little or no sex or swearing, but one that never condescends.) That’s the way almost everyone will experience it, and fair enough. Still, if you feel like bitching about it, come on over. We’ll crack a couple of watery brews and complain (in Klingon) about Uhura’s ill-fitting romance with Spock, or Chris Pine’s frat-boy weightlifter Kirk, who completely lacks the air of provincial, semi-educated suavity that made William Shatner the greatest bad actor in TV history. Or the fact that those in charge of the “Star Trek” universe could have entrusted its rebirth to someone who actually liked it.