"The Mindy Project" finally gets it just right

An inconsistent season ends on a very promising high note 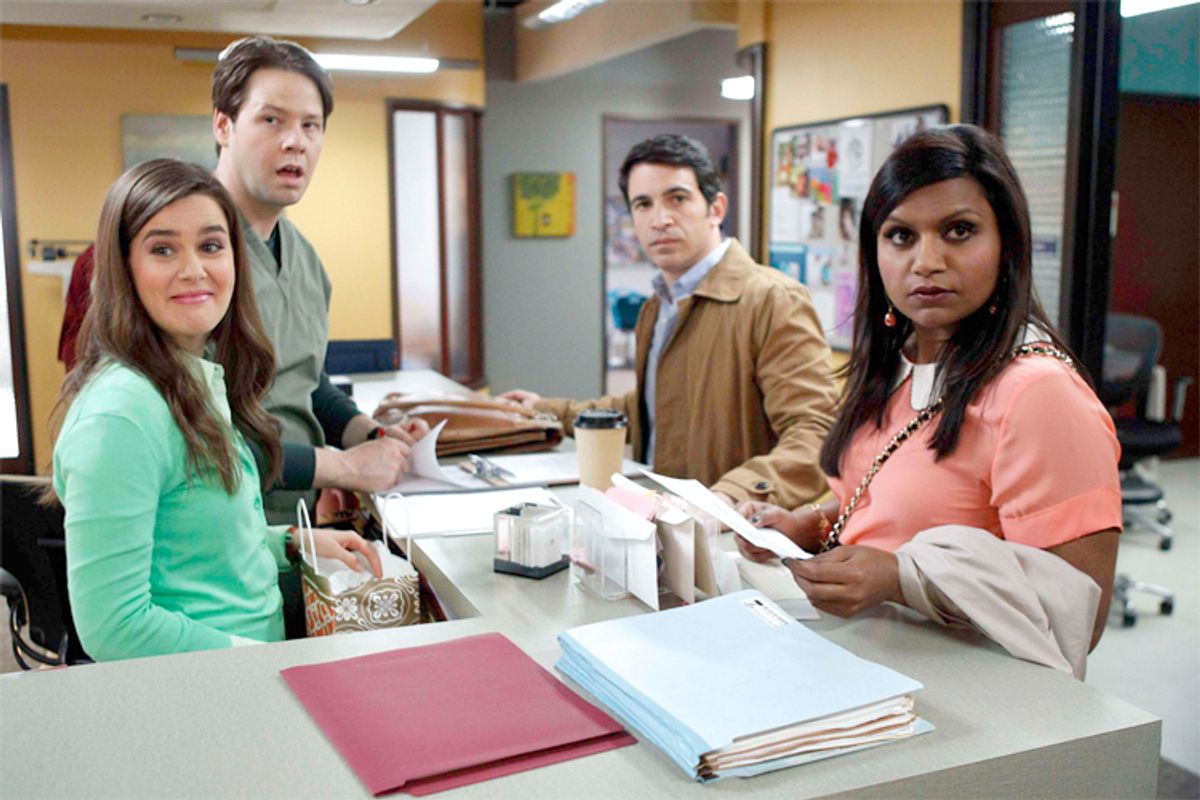 “The Mindy Project” premiered last September as one of the best and buzziest of the new fall shows. In the nine months that have followed it has made a valiant effort to live up to that promise, making more alterations — a cast tuck here, a character adjustment there — than most shows even know how to attempt. Yet right up until the fantastic season finale, it had never gotten its cut exactly right. “The Mindy Project” has often been very funny, but it has been dogged by some basic head scratchers, first among them, why are these people who really don’t like each other hanging out, outside of work, all the time? But a finale is a great time for a show to pull out its best episode — even if it took all season to get there.

“The Mindy Project” began as this season’s prime example of the single-lady sitcom, a show — like all the ones with "Girl" in the title — about a complicated woman trying to figure out the many aspects of her messy life. As the season has gone on “The Mindy Project” has become more explicitly set in the workplace. Mindy still dates — a cokehead agent, a cool Christian, a new age midwife: Kaling is aces at writing charming, semi-asshole white dudes — but her girlfriends are all gone. There has been a mass exodus of female characters, leaving Mindy to attend house parties and frat parties, run triathlons and do community service trips with the male characters who were originally created to drive Mindy crazy and be driven crazy by her in return.

Workplace comedies get to take disparate people who have no reason to like each other and make them hang out for so long that they eventually become a sort of surrogate family. But shows about groups of friends need to be about people who enjoy each other's company. For most of this season, Mindy was a show about a group of colleagues who did not like each other, and yet spent time together outside of work like they were friends. Just a few episodes ago doctors Danny and Jeremy were lying to the nurse Morgan, who had left them for the midwifery practice, trying to convince him they were really pals, even though, given all the hours they have spent together, they should have been friends long ago.

The finale not only acknowledged just how man-heavy Mindy’s universe has become — there was a shout-out to a roomful of ex-boyfriends — it continued to soften Danny (Chris Messina) up just enough to make his relationship with Mindy seem like friendship. (Let’s all just pretend Danny and Mindy didn’t almost kiss: You know that’s what they’re going to do.) Danny Castellano has become a very original character, a sort of a macho, working-class Woody Allen, very into Bruce Springsteen and fixing things, but simultaneously neurotic and antsy, unable to stay calm. The sneering know-it-all from the early episodes has become a slightly less disdainful know-it-all who is scared of horror stories, will pose for terrible art photos if he loves you enough, and stress smokes. Mindy and this Danny, a guy who can match her in both bossiness and anxiety, could be friends.

Danny still doesn’t make total sense. (Admittedly, plausibility is like the HPV of TV: If it’s not bothering you, you probably don’t care about it.) There is no universe except the one on your TV at 9:30 on Tuesday nights where a guy like Danny is an OB-GYN. A surgeon, sure. An internist, fine. Maybe even a pediatrician. But an OB-GYN, whose job is to take care of women with lots of questions and emotions? As Danny would say: fuhgeddaboudit. Many other "Mindy" characters also fail some basic TV Turing test, more very funny simulacra than human beings. Jeremy is a supposed charmer who has no friends at all. Ike Barinholtz’s Morgan is clearly so beloved by the writing staff he ends up going on, for example, camping trips it makes zero sense for him to be a part of. Casey, Mindy’s Christian pastor boyfriend, is wonderful and hilarious, but a total mad-libs of a person, the man of God who has fallen for the narcissist. The great Chloe Sevigny was more believable as the medical monstrosity she just played on “American Horror Story” than as a woman who could possibly have been a guy like Danny’s ex.

And then there is Mindy Lahiri herself, who can be almost Larry David-like in her self-absorption. But unlike “Curb Your Enthusiasm,” “The Mindy Project” sometimes seems to find Mindy's bad behavior cute, not just funny. Mindy Lahiri has been an asshole many times over, but it’s not always clear the show knows she is being an asshole, like in the recent episode when she went to a women’s prison and started a riot, a bit that was exceedingly unkind to prisoners, and extremely la di dah about Mindy’s shallow, destructive materialism. But the finale served Mindy well, too: Not only did she do some genuinely admirable things — putting out Morgan when he was on fire, not kissing Danny — she also called herself out. “I kind of suck, and no guy has ever wanted to commit to me before, because I work too much, I’m kind of selfish, and I never vote,” she explained to Casey, making her rom-com run through the very fake streets of New York City all the sweeter.

If I can float a theory about why it has taken “The Mindy Project” all season to work out its kinks, it's that those kinks would have played just fine on “The Office,” where Mindy Kaling learned to write TV. “The Office” is, obviously, a workplace comedy about a group of people who don’t like each other very much. Moreover, the sheer weirdness and boldness of so many of the personalities on “Mindy” would have fit right in on "The Office." "The Office's" mockumentary format is like a cheat sheet, a way for the writers to indicate how to feel about a certain sequence or personality, a way for the show to mock — or admire — its own characters before the audience can. (Go watch the very early episode of "Mindy" when the practice goes to a nightclub and think about how much better it would have worked as a Dunder Mifflin outing.) It's a powerful tool and it may have taken Kaling a while to figure out how to get by without it. If she finally has, who cares that it took all year.