Triumph of the viral crazies 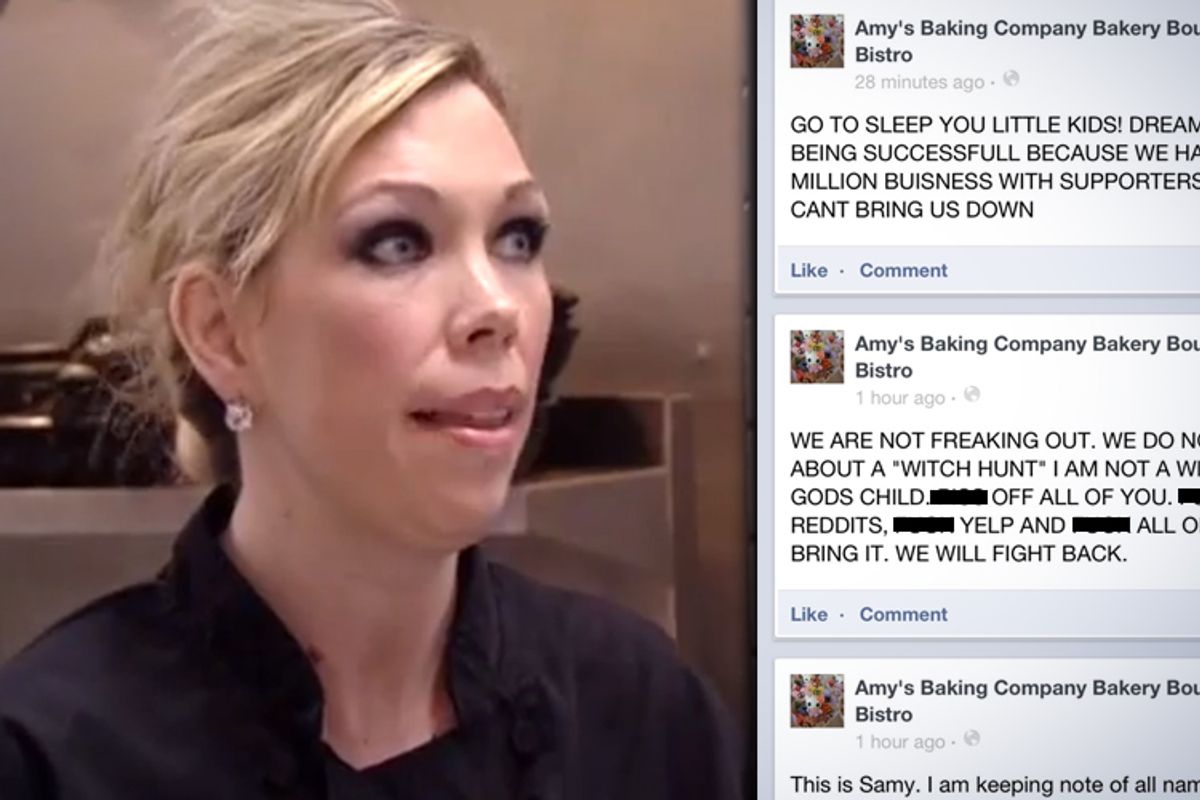 It started as a joke. But Good Lord, America, what have we done?

In a validation of stupidity not seen since, well, NBC's entire lineup, two institutions that have gone viral for their idiocy are now reaping the benefits of attention.

First, there's there Amy's Baking Co. in Scottsdale, Ariz., an establishment that became instantly notorious after owners Amy and Samy Bouzaglo were unflatteringly featured on Gordon Ramsay's "Kitchen Nightmares" – and went on a hilariously bonkers social media rampage. As the Phoenix Business Journal reported on Wednesday, the restaurant this week has become "a tourist attraction as cars slowly drove by to ogle, take photos and try to eat at the bakery and bistro."

The establishment already had a slew of favorable reviews for its "French fairyland" ambiance and Amy Bouzaglo's "generous" persona, and been featured on PBS's "Check, Please!" before this week's epic meltdown. But how could small-time accolades hold a candle to being terrible enough to make Gordon Ramsay storm out? Or, responding to Facebook criticism with commentary like "WE DONT LET SLUTTY BITCHES LIKE YOU HERE," subsequently claiming, "Obviously our Facebook, YELP, Twitter and Website have been hacked," and then, brilliantly, apparently coming right back on Wednesday to declare, "THATS IT IM DONE WITH THIS SHIT FOR TODAY. SCREW ALL OF YOU RED-SHITS, YELPERS, BLOGGERS, AND HACKERS. IM GOING HOME TO HAVE A NICE MARTINI AND A NICE LONG BATH. THIS IS ABSOLUTELY RIDICULOUS AND PATHETIC HOW IMMATURE EVERYONE IS"? (sic)

It's one long display of bonkers. But it does kind of make you want to drop by for a sandwich when you're in the Southwest, doesn't it?

More chilling than the prospect of a nation dotted with Amy's, however, are the potential rewards for teaching crazy creationism. Just last month, a copy of a purported "4th grade science quiz" went viral for posing questions like "On what day did God make dinosaurs?" and asking students how to reply "the next time someone says the earth is billions (or millions) of years old." (Acceptable reply: "WERE YOU THERE.")

Though it seemed too laughably ignorant to possibly be the work of a real educational facility, even Snopes had to acknowledge that the test appears to have truly been handed out at South Carolina's Blue Ridge Christian Academy, which follows Christian Schools International's "God as the author of all of creation" party line. Astonishingly, the Washington Post reports Thursday that because of all the attention, the school, which says it had "little hope to keep its doors open past May 31st," has now been receiving an outpouring of donations "in amounts from $1 – $1000." The school's administrator Diana Baker then bragged in a statement that "Even though the attack on the school was meant to be harmful, God has used it to provide affirmation regarding the importance of our work." In other words, in your face, science.

And so, Amy's survives to berate its patrons another day, and a Christian Academy will likely thrive another year to educate children that Jesus rode a dinosaur or something. We can mock them on Facebook and Reddit all we want, but in the end, looks like they get the last laugh.