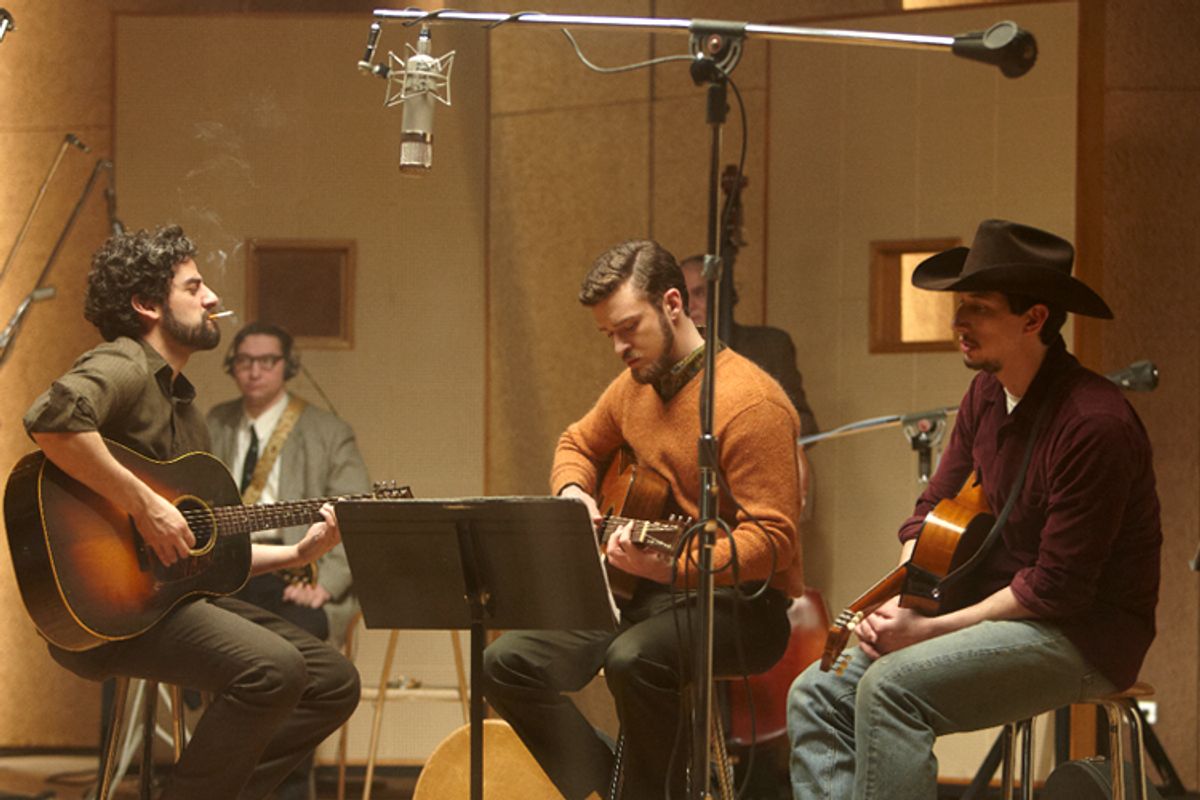 CANNES, France – On Sunday morning the sun finally came out on the Côte d’Azur --perhaps briefly, and accompanied by stiff winds – and soggy festival-goers finally had a hit movie to celebrate that did not involve Paris Hilton’s shoe collection. Joel and Ethan Coen’s “Inside Llewyn Davis,” which screened for the press late on Saturday and had its black-tie gala premiere on Sunday night, likely won’t reach American theaters until December, so it’s not yet time to write a full-length review. But this mysterious, satirical comedy-drama set in the Greenwich Village folk-music scene of the early 1960s finds the brothers at their richest and strangest, delivering a shaggy-dog parable about the elusive nature of artistic success that’s loaded with colorful supporting characters and pregnant with hidden possible meanings.

Oh, and music. Did I mention music? In fact, “Inside Llewyn Davis” is in many ways a companion piece or incestuous sibling to the Coens’ “O Brother, Where Art Thou?” Both movies seek to capture a moment in the history of American popular music, both are collaborations between the Coens and songwriter-producer T-Bone Burnett, and both – teeny spoiler coming! – contain explicit references to “The Odyssey.” Oscar Isaac, a Guatemalan-born, Florida-raised 33-year-old actor who’s been working his way toward stardom bit by bit with roles in “Robin Hood,” “Sucker Punch,” “Drive” and “W.E.,” finally gets his leading role here and makes the most of it, as the sardonic and self-destructive but abundantly talented title character. He sings traditional folk numbers beautifully, even hauntingly, while somehow conveying that Llewyn is a little too self-aware – or maybe self-aware in the wrong way – to make this work.

Llewyn used to be part of a duo that never made it, and now he’s a solo artist signed to a dead-end label run by a penny-pinching geriatric who never pays him anything. (Nominations, oh music scholars? Who’s that supposed to be?) "Inside Llewyn Davis" is, of course, the name of his non-selling new album. He also strikes me as a character from the 21st century, an irony-burdened hipster who has great difficulty adjusting to the sincerity and upbeat attitude of the Camelot era. In the movie’s funniest musical sequence, he sings harmony and plays guitar for a recording session of a novelty song about the space program – “Uh oh, Mr. Kennedy! Please don’t send me into outer space!” – written by his more clean-cut friend Jim (a lovely supporting turn from Justin Timberlake). Llewyn signs away his royalty rights in the session in order to get paid $200 up front, and you want to jump up on screen and grab him: “You dumbass! Can’t you tell a hit song when you hear it?”

“Inside Llewyn Davis” takes place in the winter of 1961, which happens to be when a young folksinger from Minnesota who had changed his last name from Zimmerman to Dylan got to New York. Despite the Welsh connection between their names, Llewyn definitely isn’t Dylan. He’s apparently a lot closer to the far less successful Dave Van Ronk, who shared his purist attitude, working-class roots and couch-surfing lifestyle. (Van Ronk’s memoir, “The Mayor of MacDougal Street,” is an acknowledged source for the Coens, although this is a fictional story, not an adaptation.)

I’m sure folk-music buffs will have fun identifying the locations and the not-so-veiled historical figures, including the angelic singer-songwriter who’s also a U.S. Army enlisted man (pretty close to the real-life Tom Paxton) and the garrulous Chicago club owner and manager who’s intent on making the burgeoning folk craze pay off. (That would be the notorious but brilliant Albert Grossman, called Bud here and played by F. Murray Abraham.) But as with “O Brother,” no musicological degree is required to appreciate this amazing evocation of a vanished New York and a vanished America, captured in the magical blue-gray images of French cinematographer Bruno Delbonnel. (Yes! The Coens have parted ways with Roger Deakins, at least for now.)

Carey Mulligan has one of her best recent roles as Jean, the embittered and foulmouthed girlfriend of Timberlake’s Jim, who to her immense regret has also gotten involved with Llewyn. John Goodman appears in his most diabolical mode – duh! It’s a Coens movie! – as a dark-hearted junkie jazz musician who embarks on an increasingly allegorical road trip with Llewyn and a nonverbal beat poet played by Garrett Hedlund. The movie turns in a circle and ends almost exactly where it begins; while it is often satirical and sometimes hard-hearted, it is rendered with such loving craftsmanship that it never feels cruel (even if Llewyn sometimes is). There is a cat who cheats death. I cannot wait to see it again.