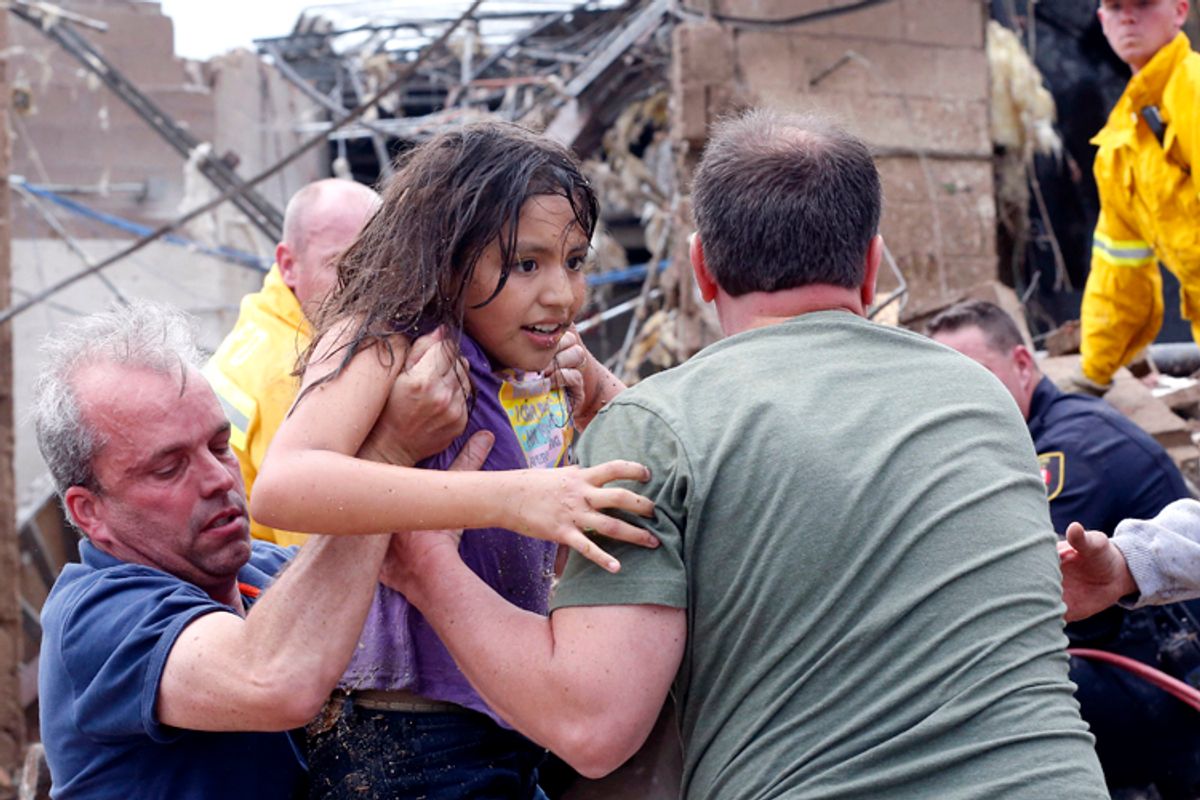 Was the severe weather system culminating in yesterday's Oklahoma City tornado intensified -- or even created -- by climate change? That question will almost certainly be batted back and forth in the media over the next few days. After all, there is plenty of scientific evidence that climate change intensifies weather in general, but there remain legitimate questions about how -- and even if -- it intensifies tornadoes in specific.

One thing, however, that shouldn't be up for debate is whether or not we should be as prepared as possible for inevitable weather events like tornadoes. We obviously should be -- but there's an increasing chance that we will not be, thanks to the manufactured crisis known as sequestration.

As the Federal Times recently reported, sequestration includes an 8.2 percent cut to the National Weather Service. According to the organization representing weather service employees, that means there is "no way for the agency to maintain around-the-clock operations at its 122 forecasting offices" and also means "people are going to be overworked, they're going to be tired, they're going to miss warnings."

Summarizing the problem, a letter from the U.S. Secretary of Commerce put it bluntly: "The government runs the risk of significantly increasing forecast error, and the government's ability to warn Americans across the country about high impact weather events, such as hurricanes and tornadoes, will be compromised.”

The good news is that the National Weather Service station in Norman, Okla., had a warning in effect for 16 minutes before the most recent Oklahoma City tornado hit. That's better than the 13 minute average so, thankfully, more people probably had more time than usual to evacuate or find safe shelter.

But what about the next time around? Will we be as ready as we can and should be? The answer is maybe not.

Though the past few years saw a record number of billion-dollar weather cataclysms, the weather service remains a perennial target for budget cuts and already has nearly a 10 percent employment vacancy rate -- and those realities may be damaging its long-term ability to warn the public about severe weather events. As the Washington Post reports:

The Department of Commerce warned that not only will the loss of satellite data and imagery diminish the quality of forecasts, but so will other important weather data surrendered by spending cuts.

Before you dismiss that as esoteric, nerdy, overly technical and therefore just abstract, check out what the president of the American Meteorological Society says it means in practice:

The public may take for granted a tornado warning or satellite loop of an approaching hurricane. Likewise, the public probably just assumes that they will have 5- to 9-day warning of storms like Sandy; 15 to 60 minutes lead time for tornadic storms approaching their home; an airline with appropriate data for safe air travel; or a military with reliable information to avoid hazardous weather on a mission protecting our freedom. However, these capabilities "can" and "will" worsen/degrade if we cut weather balloon launches, cut investments in the latest computing technology for our models, reduce Doppler radar maintenance, delay satellite launches, or shatter employee morale ... I am honestly concerned that we will regress in capability and this will jeopardize lives, property, and our security.

Following in the footsteps of former Republican Sen. Rick Santorum, conservatives faced with these self-evident facts have taken to Fox News to cite the problems previous flat budgets have already created to call for a wholesale elimination of the National Weather Service. It's a classic self-fulfilling sophistry of the right: Ignore the positive work an agency does, keep the agency's budget flat so that its capabilities do not keep up with the times, then cite the agency's reduced capabilities as justification to keep cutting it.

Perhaps, though, the devastation in Oklahoma City will serve as a reminder of why that's the wrong path. After all, the wreckage is an explicit commentary on how bad things can be even when our weather forecasting system works -- and, thus, an implicit reminder of how much worse things could be if it doesn't. It is also a reminder that we shouldn't think of weather forecasting as the insignificant television arena of dim-witted Brick Tamlands, but instead as an integral part of homeland security infrastructure.

When the ideology of austerity and Congress's manufactured crises like the sequestration collectively jeopardize that infrastructure, we are needlessly inviting unnecessary and tragic consequences.