Wikipedia cleans up its mess 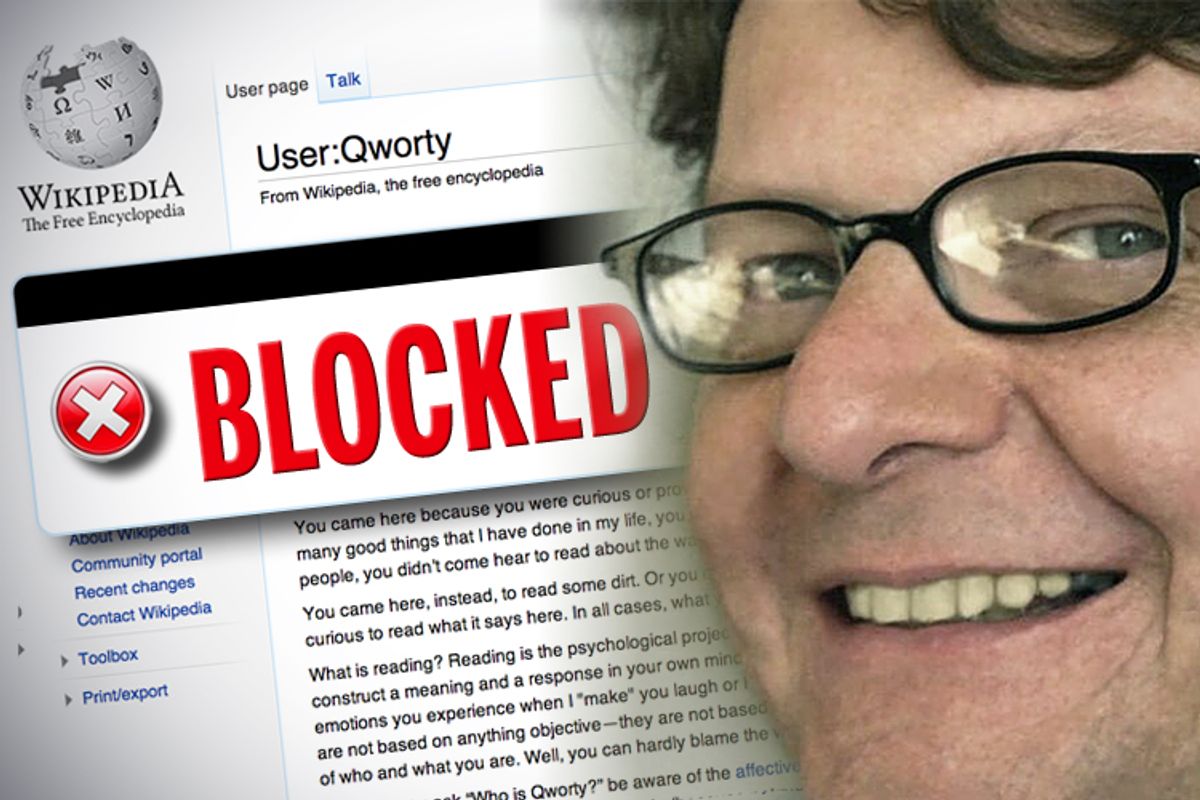 The wrath of Wikipedia has fallen hard on Robert Clark Young, aka "Qworty," the novelist/Wikipedia editor who took advantage of online anonymity to pursue vendettas against other writers with whom he had long been feuding. "Malicious editing in conflict of interest" is a venal Wikipedia sin, and Qworty's entire history of editing is now being scoured from top to bottom.

Qworty has been "blocked indefinitely" from editing for violating Wikipedia's policies on how to write biographies of living persons, " harassment and (frankly) repeatedly lying to the community." An investigation is also currently under way to determine whether Young was guilty of operating multiple "sock puppets" -- pseudonymous personas designed specifically to hide Young's true identity. The backlash has been so fierce that both Qworty's User page and Talk page have been "blanked as a courtesy," presumably to protect the pages from repeat vandalism by his angry editor colleagues.

Wikipedia founder Jimmy Wales has yet to comment on the record to Salon, but on his own Talk page he quoted my story:

"For those of us who love Wikipedia, the ramifications of the Qworty saga are not comforting." That sums it up for me. More thoughts soon.

Since my story was published, I have been contacted by several individuals who have had vexing run-ins with Qworty. Among them: Deborah Copaken Kogan, a photojournalist and author who caused a stir with her April 29 article in The Nation, "My So-Called Post-Feminist Life in Arts and Letters." Kogan wrote to inform me that Qworty had "vandalized" her Wikipedia entry after the publication of her story. Scott Mathews, a musician and producer with a long and distinguished record of achievement, told me that he had tangled for months with Qworty, who had obsessively removed content from his Wikipedia page in a display of "pure hate raining on my hit parade."

Watching Wikipedia's self-correcting mechanisms kick into action is fascinating, but some interesting ironies have come to light in the process. For example, Wikipedia strongly discourages "outing" the true identities of editors. As one commenter in a discussion forum on the Qworty affair noted, if Qworty had not admitted that he was Young on his own User page, Wikipedia would not have been allowed to link to my story.

This once again shows the bizarreness of Wikipedia's "outing" policy. If Qworty hadn't "come clean" about his real identity on-wiki, then merely linking to the Salon article naming names would be a blockable offense.

But Wikipedia editors are also not allowed to cite Wikipedia itself as a source. Therefore, as I was informed by one editor, the article about Robert Clark Young cannot include a reference to the investigation into his alleged sock-puppetry, unless a non-Wikipedia source reports it.