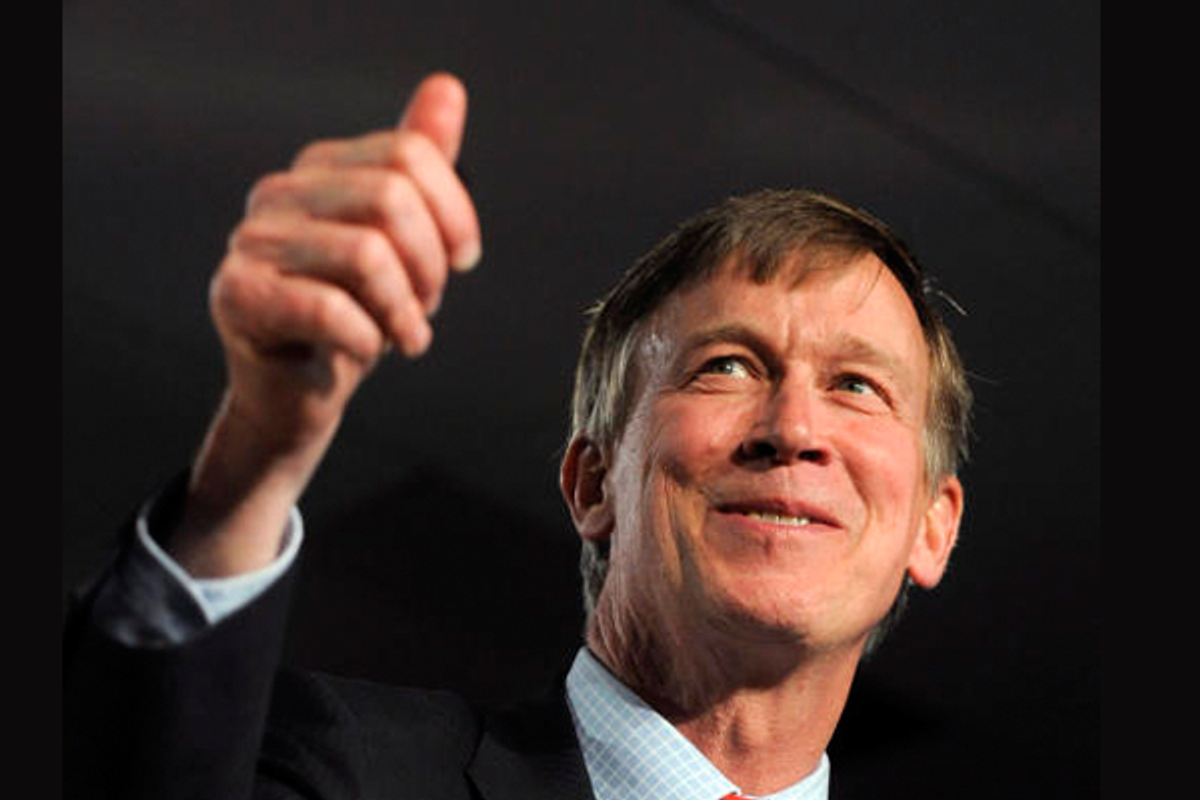 Colorado Gov. John Hickenlooper is known for a lot of things - his cheery nature, his self-promoted "quirkiness," his beer-brewing background, his loyalty to his oil and gas donors - but he is not known for being a particularly courageous conviction politician. After all, much of the high-profile change that has happened in Colorado has come not from his strong leadership, but from the Democratic-controlled legislature forcing his hand.

But in a stunning announcement today, Hickenlooper displayed a burst of genuine courage rarely seen anywhere in politics, much less in Colorado's ultra-cautious Democratic Party culture. Facing the decision of whether to execute convicted murderer Nathan Dunlap for his role in 1993's infamous Chuck E. Cheese killings, Hickenlooper used a temporary reprieve order for Dunlap to raise huge questions surrounding the death penalty itself.

Specifically, unlike the few pro-death-penalty-reform governors from other states who have cited fears that the capital punishment may be executing wrongly convicted citizens, Hickenlooper halted the Dunlap execution by making a larger critique of the entire capital punishment system. Saying the "question is about the use of the death penalty itself, and not about (Dunlap)," the governor cited "information that exposes an inequitable system" to argue more broadly that "it is a legitimate question whether we as a state should be taking lives."

Hickenlooper's criticism of the death penalty is similar to Maryland Gov. Martin O'Malley's recent (and laudable) critique. However, it's arguably much bigger political news because the Colorado governor doesn't represent a blue state. Instead, he is a purple-state politician (with rumored national political ambitions) from the "hang 'em high" Rocky Mountain West. That context means such an expansive criticism of the whole institution of the death penalty potentially prompts a discussion not merely of one case, but of the whole system.

Such a discussion is entirely necessary. That's because Hickenlooper's implicit criticism of the system is entirely spot on - even though many deny the obvious facts about how the death penalty is applied unfairly.

Case in point is Arapahoe County's Republican prosecutor George Brauchler - in its piece reporting on Hickenlooper's decision, the Denver Post reported that he "has called allegations that race plays a role in seeking the death penalty 'outrageous.'"

What's outrageous, of course, is that anyone denies the well-researched and well-proven facts. For instance, as Toure reported in Time magazine:

Many studies have shown that there is significant racial bias in the administration of the death penalty. Defendants are more likely to be sentenced to death for killing whites than for killing blacks and black defendants are more likely to get the death penalty than whites, as was referenced in David Baldus’s 1998 report “Racial Discrimination and the Death Penalty”. But a study by Jennifer Eberhardt found the impact of race to be even more nuanced: judges and juries perceive defendants who have physical traits that are stereotypically associated with blackness (broad nose, big lips, dark skin) to be more “death worthy.”...In Eberhardt’s study, stereotypically black-looking defendants were twice as likely to be sentenced to death.

Other studies confirm these findings. For example, as the Durham Independent Weekly reported, "a 2001 study conducted by two University of North Carolina professors, who analyzed cases over four years in the 1990s, found the odds of receiving a death sentence in North Carolina increased 3.5 times in cases in which the victim was white (and) found, black defendants were twice as likely to receive death sentences in instances of identical crimes." Likewise, the UK Guardian reported just a few months ago that according to a University of Maryland study, "Black defendants facing trial in Houston – the death penalty capital of America – are more than three times as likely to face a possible death sentence than whites."

In Colorado, these larger trends are embodied by a death penalty system that, according to a joint study from the University of Denver and Rowan University, is, at best, unacceptably arbitrary. "Colorado’s capital sentencing system fails to satisfy the constitutional imperative of creating clear, statutory standards for distinguishing between the few who are executed and the many who commit murder," that report concluded.

As Richard Bloch, Chief Deputy District Attorney for the Arapahoe County, recently put it: "We are in a crisis when our state, which is 4.3 percent African-American, has a death row that is 100 percent African American. A broken system has produced flawed results."

Hickenlooper evidently took this data into consideration - and, unlike so many others in his position, he then mustered the guts to do something about it. And he didn't just do something in a political vacuum - he moved knowing that, despite polls showing a slim majority of Coloradans favoring a death penalty repeal, Republicans will almost certainly try to use his decision against him in the next election. Indeed, one of the probable GOP candidates against him has already generated local headlines suggesting that in the event of a reprieve order, he will try to make the death penalty a central part of his campaign to unseat the incumbent Democrat.

The fact that Hickenlooper saw this inevitable GOP assault coming and nonetheless acted is a huge sign that American politics as a whole may finally be evolving on criminal justice issues. Indeed, if one of the country's quintessential controversy averse, consensus fetishizing politicians feels able to muster the courage to initiate a discussion of those issues in such a a politically moderate state, then any politician from any state can.