Boy Scouts to members: Just don't be a gay adult 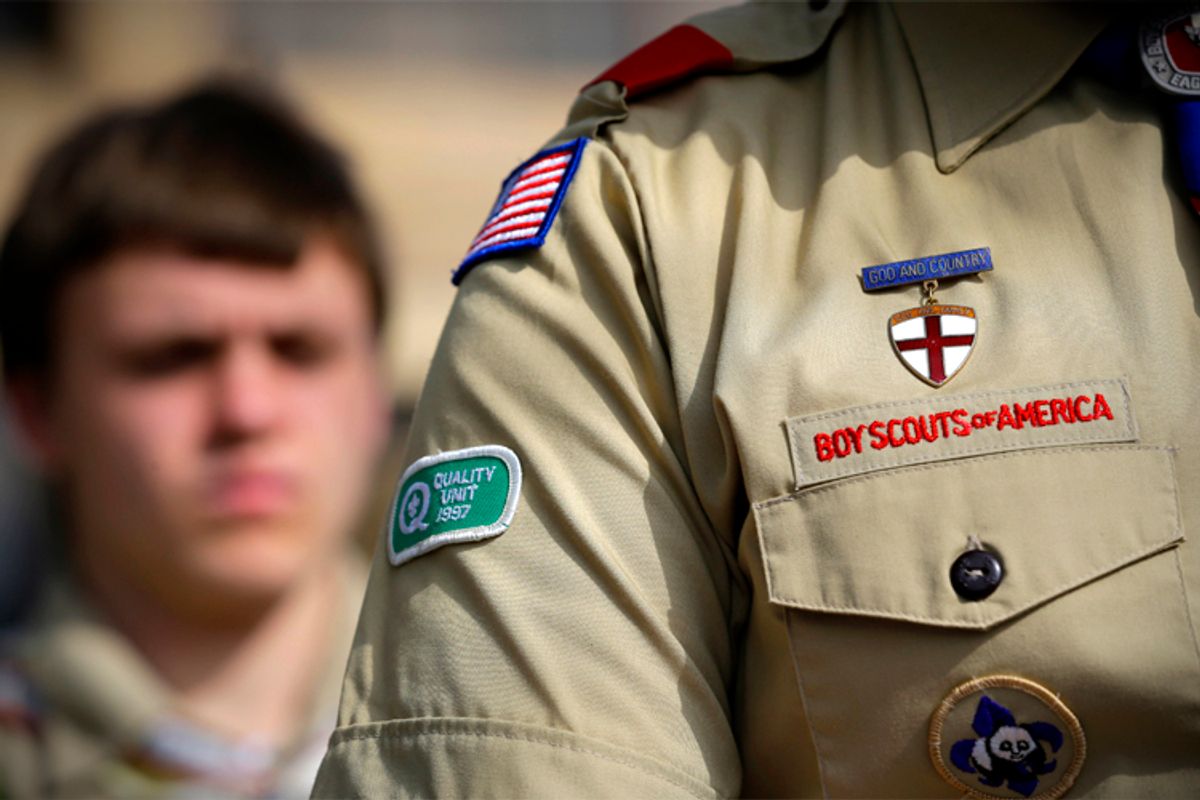 Do they give partial merit badges? After a series of high profile challenges and years of fierce debate, the Boy Scouts of America Thursday lifted its ban on accepting openly gay youths into its ranks, with a decisive 61 percent of its voting members approving the measure. As of January 2014, the organization declares that "No youth may be denied membership in the Boy Scouts of America on the basis of sexual orientation or preference alone."

That's a good start. Now how about lifting the ban on gay adult leaders?

The Scouts have long fended off the acceptance of "open or avowed homosexuals" in court and have explicitly banned them for 20 years, stating that homosexuality is "inconsistent" with the moral values of scouting. But on Thursday, chief executive Wayne Brock said, "This is not about what’s legal, "but what’s compassionate, caring and kind." And 21 -ear-old Zach Wahls, the Eagle Scout raised by two moms and founder of Scouts for Equality, called it "a historic moment."

But not everyone was pleased with the decision. Expectedly, conservatives were disappointed at the organization's easing of its restrictions. The Southern Baptist Convention’s executive committee president, Frank Page, said he was "deeply saddened" by the decision, and The Assemblies of God issued a statement saying the change "will lead to a mass exodus from the Boy Scout program." More surprising, however, was the response from former scout James Dale, who called it "a step backward."

In 1990, the then-19-year-old Eagle Scout was booted from his post as an assistant Scoutmaster when it was revealed he was serving on his college's Lesbian, Gay and Bisexual Alliance. His case eventually went to the Supreme Court, which sided in 2000 with the Scouts. Because the new rules still ban gay adults, Dale says, "This doesn’t give younger gays a future. The Boy Scouts are still sending a destructive message … You can’t have half-discrimination."

It's a message that says being gay is all well and good until you're an adult. That you're okay being who you are but people like you are unfit to be around kids. And it suggests the Scouts still have a way to go on the "compassionate and kind front." In April, Howard Bragman said that a continued ban on gay adults would be "reinforcing the scientifically incorrect and blatantly homophobic stereotype of adult gays and lesbian as pedophiliac predators."

Yet Jennifer Tyrrell, the Ohio den mother who made headlines when she was kicked out last year for being a lesbian, speaking hopefully on Thursday, said that "I am so excited because, even though it doesn't affect me, it is what we've been working for. And I think it's an indication of what's to come."

Thursday's decision is groundbreaking for the Scouts, a move toward inclusion and acceptance that has been decades in the making. But it's also a restrained victory, one that tells gay kids that they are now at long last welcome in the world of Scouting -- at least until they turn 18.