Cannes: Call it the anti-“Gatsby.” James Gray’s new film is a slow-burning 1920s parable of fall and redemption 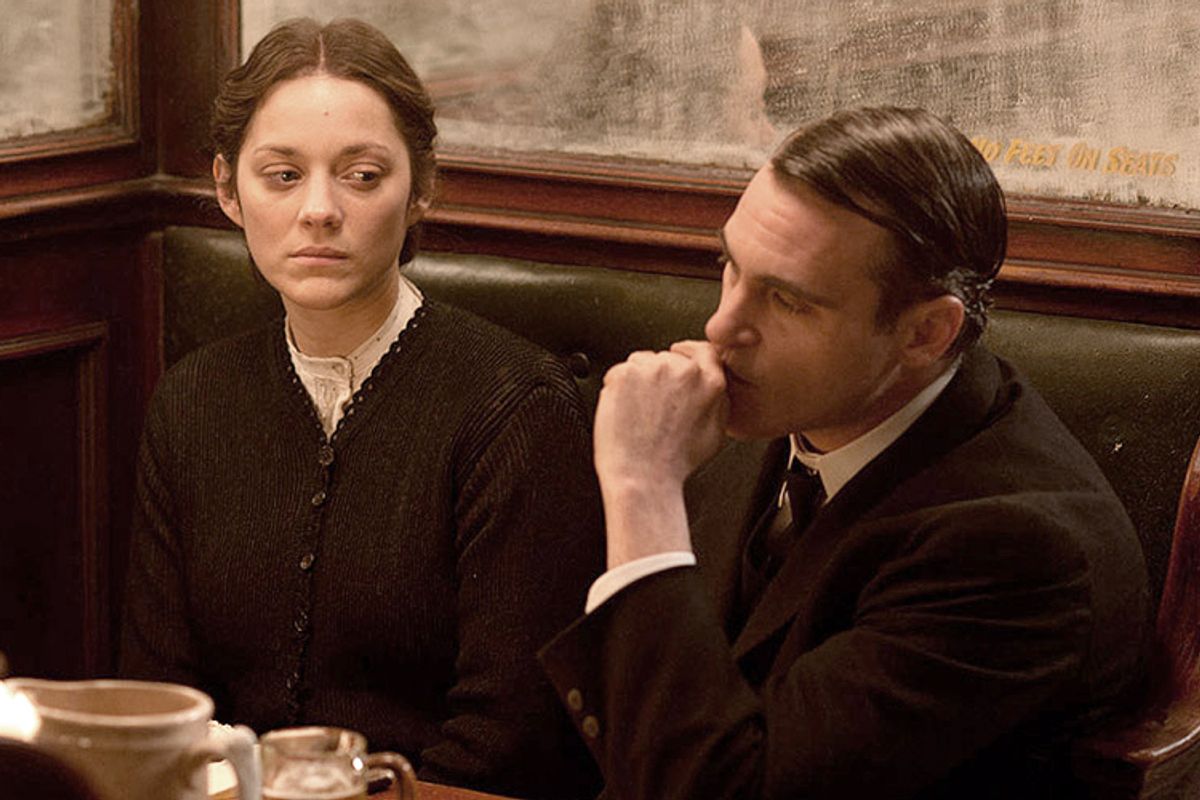 Marion Cotillard and Joaquin Phoenix in "The Immigrant"
--

CANNES, France – Immigration is a central theme of American life, and a political issue that never goes away. Whether the constant tide of people who come to the United States from other countries is a pollution of the national essence or a rejuvenating injection of life force is a question we keep hashing out over and over again, generation after generation. In “The Great Gatsby,” the film that opened the Festival de Cannes this year, Joel Edgerton’s Tom Buchanan gives his famous speech about how the “Nordic race” is in danger of being overwhelmed by dark invaders. Hardly anyone would phrase it quite that way today -- OK, Pat Buchanan comes pretty close – but the sentiment lingers in certain quarters.

James Gray’s subtle and powerful melodrama “The Immigrant,” which premiered here on Friday, is set in precisely the same period as “Gatsby” and just a few miles away, but its world and its frame of reference could hardly be more different. Gray is a fascinating figure in American film; he's an old-school craftsman who makes mid-budget, adult-oriented dramas (“Two Lovers,” “We Own the Night,” “The Yards”), a niche that barely exists these days. As Gray made clear when I spoke to him after seeing the film, he fully intends this slow-burning 1920s tale about a vulnerable Polish immigrant (Marion Cotillard) and the pimp who exploits her (Joaquin Phoenix) to be more than a period piece. (I’ll save my full conversation with Gray for another occasion.)

Initial response to “The Immigrant” seems mixed here, but I think it’s a magnificent drama with an immense emotional payoff, combining old-fashioned Hollywood storytelling and an auteurist, European-style sense of mystery. It doesn’t hurt that it’s built around two irresistible performances from genuine stars: As good as Phoenix was in “The Master,” this mendacious and tormented character may be the best role of his career. Gray has long been a Cannes favorite, and this should be the movie that wins him a major award here. His marketplace problem, on the other hand, remains the same as ever. “The Immigrant” may be a tad nuanced and understated for mainstream audiences, and it also doesn’t quite have the transgressive sizzle or show-offy qualities that create art-house hits.

This richly detailed fable draws on both Gray’s family history -- his grandparents were Russian Jewish immigrants -- and the specific social history of early 20th century New York. (Phoenix’s character, Bruno Weiss, is based on a well-known Manhattan pimp of the '20s.) But you could tell the same kind of story about the treacherous realities of immigration today, set in a different neighborhood, with characters from Mexico or Nigeria or Korea or any of dozens of other countries. Remarkably, “The Immigrant” is one of the only films ever to shoot scenes on location at Ellis Island, that focal point of up-from-the-bootstraps American mythology. (Francis Ford Coppola wanted to shoot “Godfather II” there, but ended up using a soundstage.) Gray’s immigrant grandparents came through Ellis Island, and so did mine; no doubt many American family stories conceal traumatic real-life histories like this one.

I can’t judge the quality of Cotillard’s Polish, but she has a severe, Joan of Arc luminosity as Ewa, a Polish Catholic newly arrived at Ellis Island who speaks some English (that’s good) but arrives with some ill-defined questions surrounding her “moral character” during the long sea voyage (that’s definitely bad). Her sister, Magda (Angela Sarafyan), has tuberculosis and is sent to quarantine, and her aunt and uncle in Brooklyn never show up to collect her. This leaves Ewa easy prey for Phoenix’s Bruno, himself a first-generation American who cruises the newcomers in the guise of a charity worker. I still get the sense that Phoenix is doing an uncanny impersonation of the young Marlon Brando, but Bruno is a richly realized character, eminently despicable but not inhuman. He has convinced himself that his concern for Ewa and the other young women he has turned to prostitution is genuine, and that he’s providing them an invaluable education in what’s necessary to survive in America. If that sometimes includes having sex with strangers in a Central Park pedestrian tunnel, well, welcome to the land of the free.

From Ellis Island to Central Park to middle-class Brooklyn to the crowded streets of the Lower East Side (re-created on location in the Bronx), Gray delivers a gritty, muted portrait of Roaring '20s New York, photographed in monochrome tones by master cinematographer Darius Khondji. To put it in “Great Gatsby” terms, his characters are the strugglers and strivers in those nightmarish fields of ashes; they’ve never been to East Egg or the Plaza Hotel. Jeremy Renner shows up for a while as Bruno’s feckless cousin, a stage magician, turning the perverse Ewa–Bruno relationship into a romantic triangle. But “The Immigrant” is less a love story than a fable of sin and redemption and perhaps even of salvation, that central American conception that touches everyone who comes here.