Stop what you're doing and go watch "Borgen"

The great Danish political drama is finally available legally in America. So what are you waiting for? 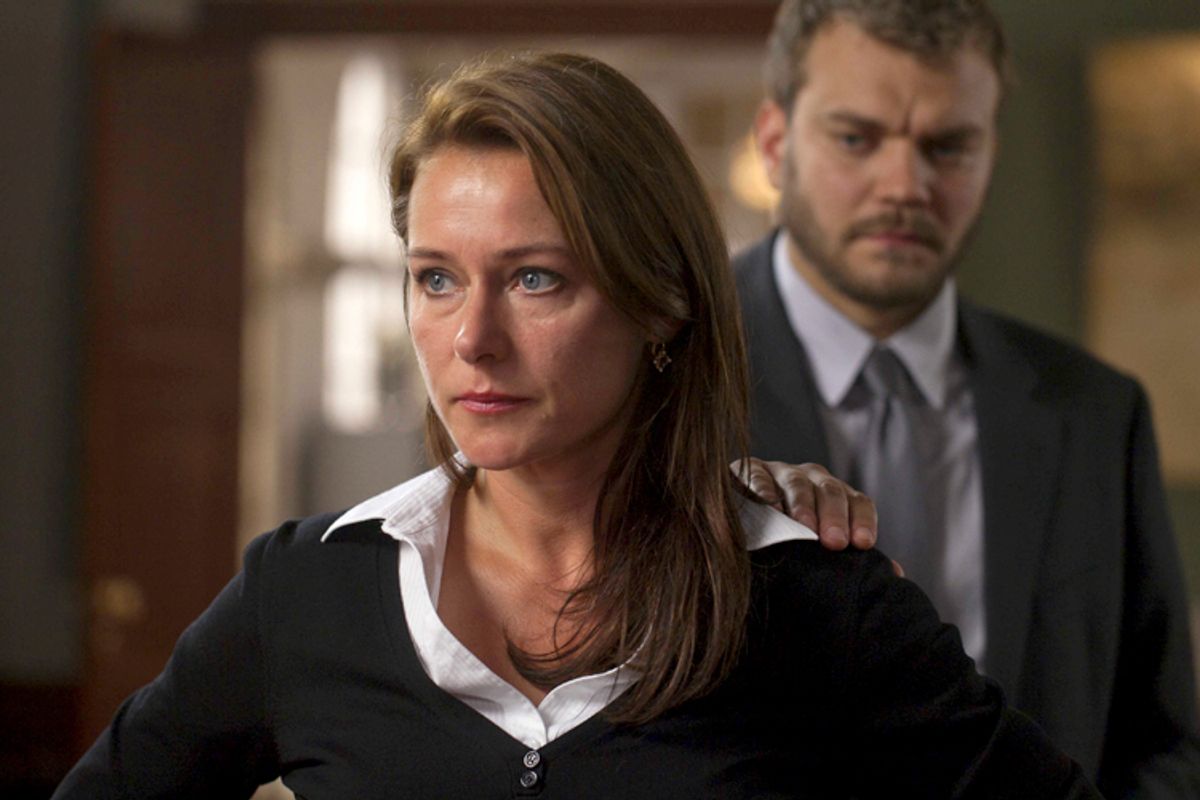 Summer unofficially begins this weekend and with it comes television’s silly season. Yes, the networks are making unprecedented efforts to air original series year round, “Mad Men” and “Game of Thrones” will be with us through June, “Breaking Bad” will be back in August, and there’s seven and half hours of “Arrested Development” to demolish, but generally speaking, in the summer TV gets as lazy as everything else. It’s the perfect time to discover shows that are, if not new, new to you, and I have a rapturous recommendation. Two weeks ago, I finally started watching “Borgen,” the much-praised Danish series about a female prime minister that is a hit in England but has been only sporadically legally available in the United States. (“Borgen” pushed the New York Times as close as it's ever come to advocating piracy; a rave review for the show noted that it was almost impossible to find.) But the first two seasons of “Borgen” started airing last Friday on KCET, one of California's public television stations, and are also  available on the channel's website, which means you can now watch "Borgen" without breaking the law, something I encourage you to do with all possible haste.

“Borgen” stars the amazing Sidse Babett Knudsen as Birgitte Nyborg, who begins the series as the head of the lefty Moderate party, a mother of two, and one half of the sexiest, most functional TV marriages this side of Eric and Tami Taylor. (This is not an exaggeration. If I had led with that, you’d probably already be watching.) In the Danish parliamentary system, eight political parties align in various ways to form coalition governments. In the first episode of the series, through various political missteps, the largest liberal and conservative parties rough each other up, giving Nyborg’s Moderates a huge boost and herself the unexpected opportunity to head up a liberal coalition as prime minister.

Denmark’s two other much admired series, “Forbrydelsen” and “Bron/Broen,” have both been made into American shows: AMC’s much harangued cop show “The Killing” and FX’s forthcoming “The Bridge,” about a body found not on the Danish-Swedish border, but the Mexican-American one. Though “Borgen” has been in development at HBO, it feels fundamentally untransferable because of the differences between American and Danish politics, differences that are essential to “Borgen’s” excellence. “Borgen” is about how political power changes a woman who is recognizably normal, if, thanks to Knudsen, abnormally charismatic. Normal is something that American politicians vying for the highest office in the land have long since ceased to be, however much they jockey to appear it.

In America, to make a fiction about a relatively regular person becoming head of state, he has to be, as in the Kevin Kline film “Dave,” the doppelganger of a secretly comatose president. In Aaron Sorkin’s “The American President,” Michael Douglas’ Andrew Shepherd has to break numerous security protocols to go buy flowers for his girlfriend. In America, normality, privacy and work-life balance are not something that politicians expect to have or that we expect politicians to have. Up until the moment she becomes prime minister, however, there are things that Birgitte Nyborg happily enjoys. She bikes to work. She has no security detail. Before the election she and her family live in a well-lit, nicely appointed but modest home. After the election they still live there.

Though “Borgen” was influenced by “The West Wing” (Nyborg, like Josiah Bartlet, has a knack for giving the honest speech),  it makes “The West Wing” look sentimental, and not because "Borgen" has some ultra-dark view of politics. (In a great New Yorker piece about DR, the broadcaster who makes all these Danish masterpieces, Lauren Collins quoted DR as saying it wanted its series to have messages. “Borgen’s” is, “Can you be in power and remain yourself?” and for the answer, they “want to say yes.”) Rather, compared to American political dramas — "West Wing," "Scandal," "Homeland," "House of Cards" — “Borgen” feels grounded. It is not puffed up with an American sense of grandiosity and world historical import. Each episode contains intricate twists and turns, but is focused on the human-size, psychological aspects of politics, of how Nyborg learns to be effective and at what cost.

The cost ends up being high. Nyborg is decent, well-meaning, sexy, funny, steely. (I dare you to watch her and not develop a crush.) She belongs on any political fantasy team alongside Shepherd, Bartlet and “Battlestar Galactica’s” Laura Roslin. But over the course of “Borgen’s” first two seasons —  the third and final season has aired in Denmark, but won't air in America until October — Nyborg learns how to navigate and wield her power, an experience that is taxing, isolating and difficult. As time passes, she becomes savvier and more decisive, increasingly comfortable making decisions, an authoritarian knack she starts to take home with her. Knudsen has an infectious, crinkly-nosed smile, but Nyborg has less and less occasion to use it. As she becomes better at her job, her personal life falls apart. ("Borgen" does some heartbreaking things to her adorable marriage it's hard to imagine any American show daring.)

In a recent interview with New York magazine, “Breaking Bad’s” creator Vince Gilligan was asked if there are any honest-to-god nice characters on TV that he finds interesting. Gilligan came back with SpongeBob SquarePants before saying, “I’m very glad people love Breaking Bad, but the harder character to write is the good character that’s as interesting and as engaging as the bad guy." Nyborg is not quite honest-to-god nice — she loses her temper, she holds a grudge, she's not always emotionally generous — but she is a good person, and through all her difficulties she remains one, without ever being anything less than totally riveting.

In the context of other TV, a show about a good guy — in this case a good gal – is rare. Moreover it is adult. We have become accustomed to defining grown-up entertainment — the best that cable has to offer — as literally that which is not fit for children, because of its violence, its sex, its nudity, its morally reprehensible or ambiguous behavior. But “Borgen,” which has almost no violence, some sex, and moral ambiguity an order of magnitude less than that of, say, "Breaking Bad" or "The Wire," is adult in another way: It expects its audience to have the brain power to pay attention to well-plotted stories that do not end in murder, corruption or other high-octane badness so often as reasonable compromise. "Borgen" is fun and funny; there’s plenty of blackmail and high-stakes situations, whether on a military base in Afghanistan or in televised debates, but there are no assassination attempts or bombings, no hidden cases of MS, or savvy majority whips who murder congressmen and make it look like suicide.

Making decency interesting is hard, but "Borgen" makes it look easy. Nyborg, along with the show's two other main characters — her spin doctor (that's a Danish term too), Kaasper Juul (Pilou Asbæk), and the TV reporter Katrine Fonsmark (Birgitte Hjort Sørensen) — are all very good at their jobs, and, though Kaasper claims not to be, bound by decency. This competency and civility extends to the larger government. One of the thrills of watching “Borgen” as an American is to see a politics not entirely paralyzed and polarized. Because compromise and coalitions are essential to staying in power, the politicians talk to each, usually over a billionth cup of coffee. (Danes appear to be highly caffeinated.) What American, whatever his party, wouldn't sigh to see on "Borgen" a bill pass on a straight 81-80 parliamentary vote, no filibuster in sight?

As a liberal there is even more of a thrill to "Borgen." Danish politics — excluding the xenophobic nationalist Freedom party — are so far left of America that the politicians on "Borgen" get to say the darnedest things. In an early episode, Nyborg successfully mandates gender equality on corporate boards. (To be fair, Nyborg is sometimes centrist; she decides to keep Danish troops in Afghanistan as well.)  And Nyborg herself— a fictional female P.M. who presaged the Danes' first real female P.M. — is, without any fuss, a feminist hero of the first order. Even in a country where 70 percent of women work, she ultimately gets caught up in a debate about whether working mothers can be good mothers, but at least Nyborg gets to respond to this charge by saying, "What did you think, that I was going to quit and become a housewife?” with absolutely no fear of offending every housewife and half the husbands in Denmark. Soon after this remark, just in case you weren't already with her, she crinkle-smiles. You already will be.