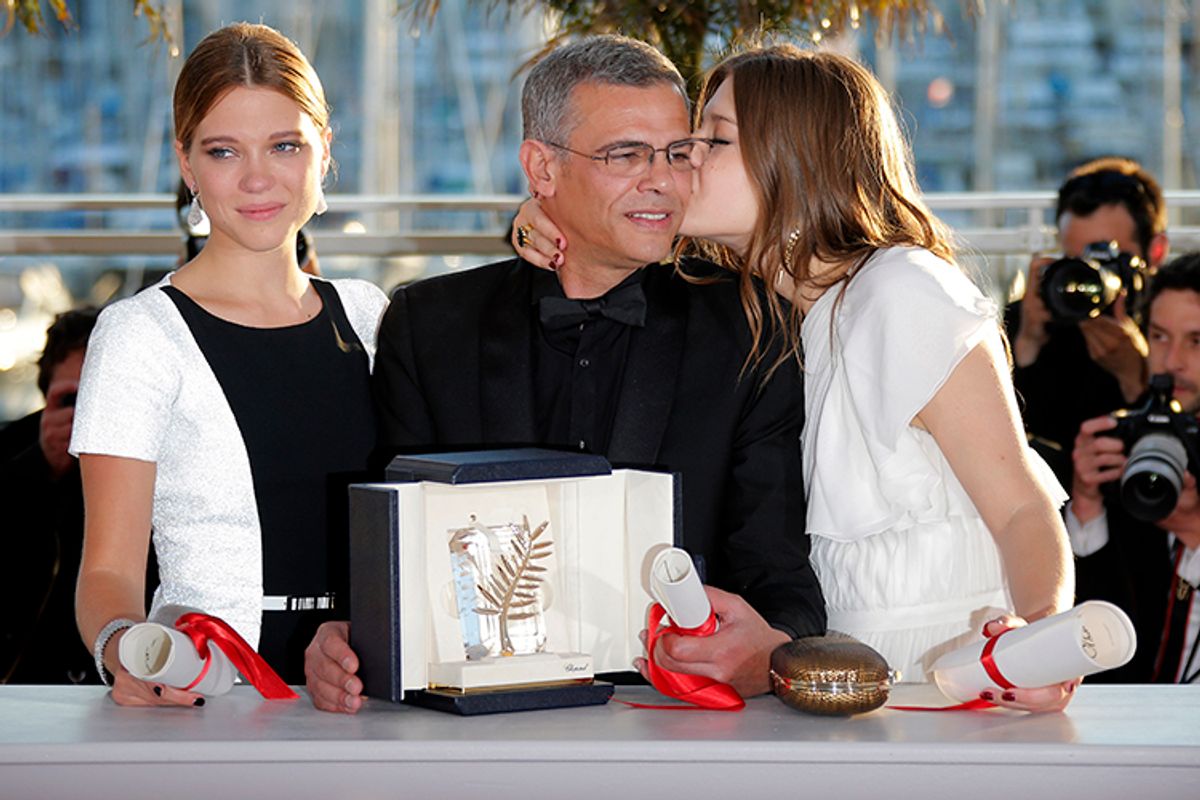 In a major triumph for the host nation at the conclusion of the 66th Festival de Cannes – which many observers expected would be dominated by American films – French director Abdellatif Kechiche’s explicit lesbian love story “Blue Is the Warmest Color” won the Palme d’Or on Sunday evening, from a jury headed by Steven Spielberg. This marks only the fourth time a French film has won the Palme, widely regarded as the biggest non-Oscar prize in the global movie business, since the mid-1960s. (Last year’s winner, Michael Haneke’s “Amour,” was officially an Austrian-made film, although entirely shot in France.) It’s also the first time a gay-themed love story has won the Palme.

In a clever evasion of festival rules, which stipulate that no film may win the Palme d’Or and a major acting award, the jury invited the two young stars of “Blue Is the Warmest Color,” Adèle Exarchopoulos and Léa Seydoux, on stage to share the award with director and co-writer Kechiche. Both major acting awards, in fact, came as surprises, with Bruce Dern named best actor for his role as an elderly alcoholic struggling with dementia in Alexander Payne’s downbeat, black-and-white “Nebraska,” and French actress Bérénice Bejo taking the best-actress prize for playing a working-class Parisian mom in Iranian director Asghar Farhadi’s “The Past.”

Quite a few higher-profile performances were left out on awards night, including Michael Douglas’ justly celebrated turn as Liberace in the Steven Soderbergh drama “Behind the Candelabra” (premiering on HBO this weekend), Oscar Isaac’s breakout leading role as a downward-trending folk singer in the Coen brothers’ “Inside Llewyn Davis” and Joaquin Phoenix’s dark but compelling portrayal of a 1920s New York pimp in James Gray’s “The Immigrant.” Indeed, despite considerable advance buzz and generally excellent reviews, both “The Immigrant” and “Behind the Candelabra” leave Cannes with no awards whatever.

Given the strength and breadth of this year’s field, there’s no disgrace in that. The Coens’ “Inside Llewyn Davis” – a likely Oscar contender in multiple categories -- won the Grand Prix, essentially the runner-up prize, while Japanese director Hirokazu Kore-eda’s heartwarming family drama “Like Father, Like Son” won the third-place Prix du Jury. More surprises came with the best director award, given to Mexican filmmaker Amat Escalante for the violent drug-war saga “Heli” (which I have not seen but got mixed reviews), and the screenplay award, which went to cutting-edge Chinese filmmaker Jia Zhangke for his equally violent episodic fable about corruption in his homeland, “A Touch of Sin.” The closely watched Caméra d’Or award, for best first film in any section of the festival, went to Singapore director Anthony Chen’s intimate domestic drama “Ilo Ilo.”

This year’s Palme d’Or jury was an unusually high-profile group, chaired by Spielberg and also including Nicole Kidman, Christoph Waltz, Ang Lee, former Palme d’Or winner Cristian Mungiu (of “4 Months, 3 Weeks and 2 Days”) and Scottish director Lynne Ramsay. But anyone who suggested such a jury might look for a safe or conventional choice was evidently misreading the tea leaves; whatever one thinks of his films, Spielberg is a genuine aficionado and cinephile. If the Palme d’Or choice had been submitted to a vote by the army of critics who soaked up wine and coffee along the Croisette over the past 10 days, the winner would probably have been the same.

In the North American marketplace, the Palme d’Or often supplies only a modest box-office boost, at best. (Few people outside the top three or four metropolitan markets ever saw or even heard about such recent winners as Apichatpong Weerasethakul’s “Uncle Boonmee Who Can Recall His Past Lives,” Laurent Cantet’s “The Class” or Ken Loach’s “The Wind That Shakes the Barley.”) But that pattern has been shaken up the last two years, with Haneke’s “Amour” and Terrence Malick’s “The Tree of Life” going on to earn glowing reviews, successful theatrical runs and major Oscar nominations. (In case you’re wondering, no movie has won both the Palme d’Or and the Academy Award for best picture since Delbert Mann’s “Marty” in 1955.)

I think “Blue Is the Warmest Color” (the original French title actually translates as “The Life of Adèle, Chapters 1 & 2”) is a wonderfully moving and absorbing work that fully deserves this award – but I also doubt it can replicate anything close to that success. While the intense and explicit scenes of lesbian sex will certainly be a draw for some filmgoers – and it’s a made-to-order film for on-demand home viewing – they also limit its theatrical potential to art-house venues in big cities and college towns. (None of the major theater chains will take on a film released without an MPAA rating, which will certainly be the case here, and most newspapers still won’t accept ads for such films.)

In fact, the sex scenes take up perhaps 10 minutes in a film that runs nearly three hours, and is also a densely absorbing social drama that’s highly specific to the political and cultural climate of contemporary France. Those factors may pose a stiffer marketing challenge than the button-pushing issues of sex and sexuality, although they likely compound each other. Anyway, see it when you get the chance, because it may not last long. Speaking personally, I’d put “Blue Is the Warmest Color” alongside Gray’s superb “The Immigrant” – a movie I was sorry to see the jury pass over – at the top of my Cannes list, with “Inside Llewyn Davis,” “The Past” and “A Touch of Sin” not far behind.

This festival that began with torrential rains now reaches its end amid glorious Mediterranean sunshine and a memorably strong lineup of films. As always, one concludes a surreal and nearly sleepless week and a half in Cannes with some regrets. There are quite a few movies I missed that I can’t wait to catch back home, including “Heli,” Jim Jarmusch’s vampire drama “Only Lovers Left Alive,” Jeremy Saulnier’s “Blue Ruin” and Clio Barnard’s “The Selfish Giant.” You wouldn’t have wanted me to pass up that late-night glass of rosé on the balcony just to watch another damn movie, would you?