Advice for Cardinal Pell: When you’re talking about coverups of child rape, it’s best to stick with apologizing 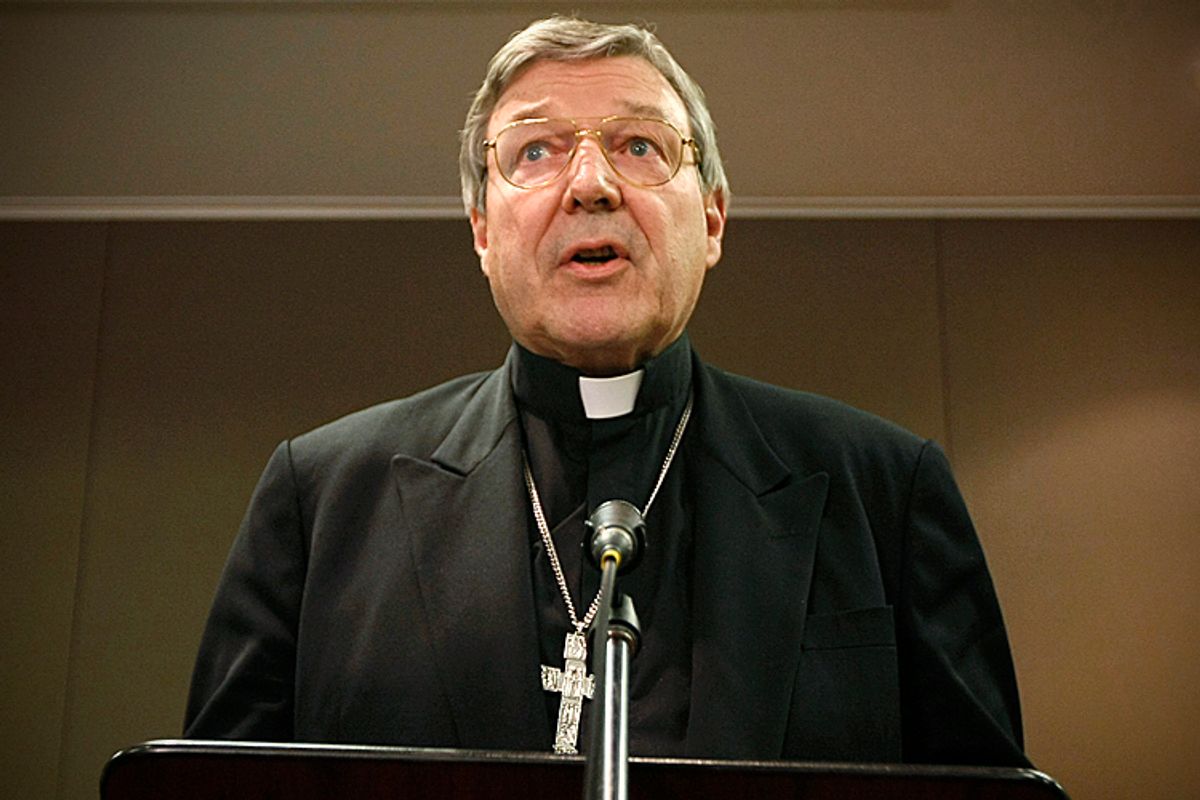 George Pell says, "I have always been on the side of the victims." But the archbishop of Sydney has a funny way of expressing his support.

During an inquiry this week into what the Herald Sun describes as "rampant" child sexual abuse by priests going back decades, Pell admitted, "We've been slow to address the anguish of the victims and dealt with it very imperfectly." He acknowledged that his predecessor, Sir Frank Little, "did cover up" sex abuse and that former Ballarat Bishop Ronald Mulkearns knew of accusations and destroyed documents and moved suspects to other parishes, actions that were "followed by disastrous consequences." The Victorian parliament has already assessed that roughly 620 children were sexually abused by clergy in Australia from the 1930s to the present. It was abuse that was not just perpetrated but concealed by the nation's hierarchy. "The primary motivation would have been to respect the reputation of the church," Pell admitted. "There was a fear of scandal."

In his remarks, Pell was apologetic and specific in his acknowledgment of wrongdoing. "I don't think many, if any, persons in the leadership of the Catholic Church knew what a horrendous widespread mess we were sitting on. There's no doubt about it that lives have been blighted," he said. "There's no doubt about it that these crimes have contributed to too many suicides."

But though Pell says he never directly covered up abuse and that he is "committed to working to make improvements," Pell's track record tells a different story. Twenty years ago, Pell appeared in court with his colleague Father Gerald Francis Ridsdale while Ridsdale was on trial for sexual abuse. Ridsdale was eventually convicted of molesting and raping 40 children over a 26-year period. At the inquiry this week, Cardinal Pell defended his support for Ridsdale, saying, "At that stage nobody knew -- well, I certainly didn't -- what proved to be the full extent of his infamous career. I did know that there was a very significant number of charges but I had no idea about all the other things that would unfold." During the same period, Pell continued to authorize payment of a "frugal" allowance to Father Ronald Pickering after Pickering fled to England in the wake of sex abuse allegations and refused to cooperate with authorities. It was Pell's successor who stopped the payments and launched an investigation.

That's not where Pell's ignorance ends, though. Eleven years ago, Pell told a group of World Youth Day delegates that "abortion is a worse moral scandal than priests sexually abusing young people" because abortion "is always a destruction of human life."

And although, when he spoke on Monday, Pell said, "I am fully apologetic and absolutely sorry," his degree of not-getting-it is still pretty staggering. Pell insisted, "I don't believe we have a moral obligation" to increase the settlement amounts for sex abuse victims. And in an epic case of poor timing, he railed against "25 years of hostility from the press" and noted that the Australian government "was not active earlier" in pursuing sexual abuse cases. He also, outrageously, declared, "I’ve sometimes said, if we’d been gossips – which we weren’t – and we had talked to one another about the problems that were there we would have realised earlier just how widespread this awful business was."

Here's a hint: When you're talking about systematic coverups of child rape, it's best to stick with apologizing. It's good to remember that you can admit you've made mistakes without making the ludicrous, easily refuted claim that you've always been on the side of the victims, or humble bragging that the real problem is that you weren't "gossips." Doing the morally and legally responsible thing of acting when someone is abusing children is not, by the way, "gossip." And you want to consider, while you're explaining yourself to the world, that you still have much soul searching yet to do. Because right now, Pell remains a harrowing example of the evil of complacency.

Perhaps the most telling moment of Pell's appearance wasn't anything he said about the crimes on his colleagues or the litigation of victims. Instead it was when, on Monday, the deputy chairman of the committee, Frank McGuire, asked Pell point-blank, "Were you guilty of willful blindness?" And the man of God answered him confidently, "I certainly wasn't."