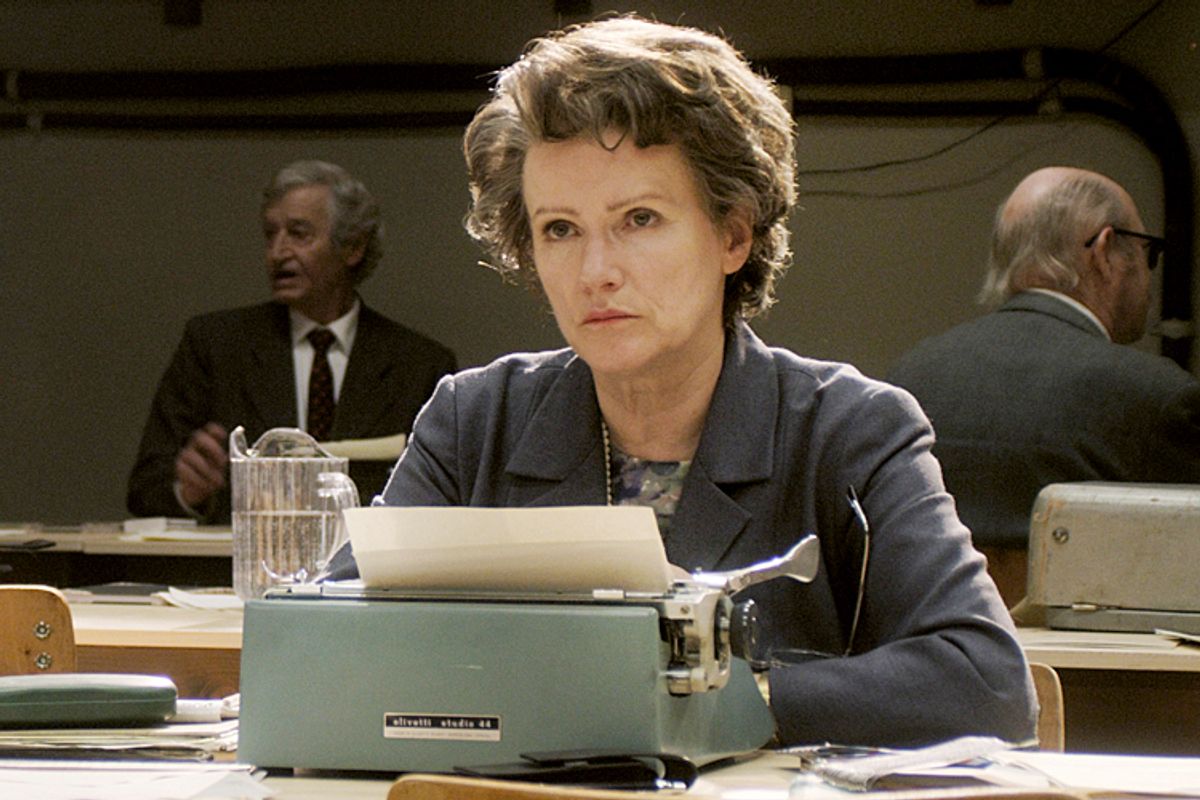 In the early 1960s version of social media – the New York cocktail party – Hannah Arendt was the very hottest of trending topics, and subject to much the same kind of distortion, misapprehension and groupthink we so often encounter today. German filmmaker Margarethe von Trotta’s talky but fascinating period drama “Hannah Arendt,” starring von Trotta’s longtime collaborator Barbara Sukowa as the prickly, brilliant German-Jewish writer and scholar (Arendt disliked being called a philosopher), partly succeeds in bringing life to a long-forgotten dispute that divided the American intelligentsia.

When New Yorker editor William Shawn (neatly portrayed by British actor Nicholas Woodeson) assigned Arendt to cover the Jerusalem trial of accused Nazi war criminal Adolf Eichmann, he clearly knew he wasn’t going to get straightforward news reporting. A former prize pupil (and lover) of legendary philosopher and one-time Nazi Martin Heidegger, Arendt was already famous in academic circles for her books “The Origins of Totalitarianism” and “The Human Condition,” both of which remain influential works of 20th-century political thought. She was also a Jew who had fled Germany after the rise of Hitler and briefly been interned in a French detention camp before escaping to the United States.

Eichmann had been, at the very least, a principal functionary in the Nazi campaign to exterminate European Jews. After the war he had evaded capture by the Allies and escaped to South America on a Red Cross passport. He was working as the manager of a Mercedes-Benz factory in Buenos Aires when agents of the Mossad, Israel’s international spy agency, abducted him in May of 1960. (He was heavily drugged and transported to Israel disguised as an El Al flight attendant.) His trial became one of the biggest news-media spectacles of the early ‘60s, not least because the kidnapping was certainly a violation of international law, however justifiable it may have looked on moral grounds.

Later scholars have found plenty to nitpick in Arendt’s resulting book “Eichmann in Jerusalem,” whose first draft appeared in five installments in the New Yorker. Indeed, Arendt may have been a bit too credulous about Eichmann himself, a shifty character who strove to present himself during the trial as a non-ideological mid-level bureaucrat who simply did as he was told. But in my judgment “Eichmann in Jerusalem” endures as a masterwork of both style and substance, which shaped moral and philosophical theory, public discourse about the Holocaust and the dispassionate, sarcastic voice of magazine journalism for many years to come.

Von Trotta’s film takes a while to get warmed up, expending a fair bit of chit-chatty screen time on Arendt’s complicated marriage to poet and philosopher Heinrich Blücher (Axel Milberg) and her friendship with novelist Mary McCarthy (perfectly realized by Janet McTeer). But once we get to the Eichmann trial and its aftermath, it’s mesmerizing. Von Trotta intercuts excerpts from the actual trial, showcasing moments when the balding and bespectacled Eichmann argues with the judges over legal niceties and helpfully explains that under Nazism he was not free to do, or even to think, as he pleased. There’s an extremely dark element of comedy to the whole thing, which a person of Arendt’s disposition could not resist: this rumpled-looking man in a bad suit, sitting inside a glass cage and protesting that his orders to send millions to their deaths were society’s fault, and he was just a guy who sat at a desk doing paperwork.

Arendt’s “Eichmann in Jerusalem” pioneered the phrase “the banality of evil,” and even if she personally misjudged Eichmann’s ideological fervor and level of culpability, the idea that grave historical crimes can be committed by normal people who just go with the flow and do as they’re told is critical to understanding the modern era. Indeed, although evidence has subsequently surfaced that Eichmann had been more of a committed Nazi and anti-Semite than was evident in 1960, I’m not sure that contradicts anything Arendt wrote about him. His great crime, she concluded, was that he had given up the capacity and responsibility of thinking for himself. In Nazi Germany, he parroted the regime’s ideology and vigorously pursued its campaign of genocide; in Israel he presented himself as a mild-mannered button-pusher with no particular views about the Jews or anything else. In both cases, he was simply doing what was expected of him -- and, crucially, seeking to please those in power -- while displaying no autonomy of thought or personality. You get the feeling that if Israeli authorities had offered him a job as assistant curator in a Holocaust museum, he'd have pursued his appointed tasks with diligence.

Some readers were offended by Arendt’s presentation of Eichmann as a mediocrity or a nonentity rather than a monstrous psychopath, and others by her depiction of the entire spectacle as a political show trial staged by Israeli Prime Minister David Ben-Gurion. In this reading, Eichmann himself was no more than a symbol or a prop, and the primary purpose of the trial was to deliver first-person testimony from Holocaust survivors to a global audience, and so prop up the legitimacy of the state of Israel. (Many of the horrific witness accounts had no direct bearing on the question of Eichmann’s guilt.) But those disputes were all sideshows to the main event.

Today it is well understood in Holocaust scholarship that many leaders of Jewish communities in Europe (although certainly not all) chose to cooperate with the Nazi occupiers. At first this was almost always done with the best of intentions, in hopes of minimizing death and suffering. While the anti-Semitic ideology of the German government was well understood, it still seemed implausible that the Nazis would bother pursuing the wholesale murder of millions of people. At the risk of oversimplifying a painful and complicated history, I think we can say that many interrelated factors were involved in Jewish collaboration, from undue optimism and credulity to the desire for self-preservation to intimidation, terror and outright despair. By 1942 and ’43, when the Germans began to pursue the Final Solution in earnest, resistance was neither possible nor practical in most parts of occupied Europe.

These were incendiary topics to discuss in the early ‘60s, when the historical study of the Holocaust was in its infancy, and Arendt’s approach was not delicate. Only 10 pages or so of “Eichmann in Jerusalem” concerns the topic of Jewish collaboration or cooperation with the Nazis, much of it devoted to a scathing depiction of Chaim Rumkowski, the infamous head of the Council of Elders in Poland’s Łódź Ghetto. Rumkowski remains a contested figure in Holocaust scholarship; reportedly an abusive and autocratic man who safeguarded his own privilege, he may also have enabled the survival of several thousand Łódź Jews through his constant bargaining and maneuvering. He eventually died in Auschwitz, although whether he was killed by the Germans or by Jewish inmates who despised him remains unclear.

As we see in von Trotta’s film, after Arendt’s dispatches began appearing in the New Yorker, articles in the New York Times, the Daily News and other New York papers began to spread the idea that she was a borderline Nazi apologist who thought Eichmann was innocent and blamed Jewish leaders for the extermination of their own people. That was somewhere between a gross distortion and an outright fabrication. Just to be clear, Arendt never sought to deny Eichmann's immense moral culpability for the Holocaust, and concluded by supporting Israel’s eventual death sentence against Eichmann, despite her doubts about the legality of the proceedings.

Most of those in the American Jewish community who turned against Arendt simply hadn’t read her 300-page account in all its ambiguity and irony and moral breadth, but there were also those, like the religious scholar Gershom Scholem, a longtime friend, who simply found her writing too ruthless and devoid of feeling for the sufferings of her fellow Jews. (Interestingly, Scholem wrote a letter to Israeli authorities urging them to spare Eichmann, arguing that it was more in keeping with Jewish teachings to show mercy and allow the criminal to live out his life amid the awareness of his crimes.) Her response to these criticisms, at least in the film, is vintage Arendt: “You know I don’t love any people – how can I be expected to love the Jews?” In New York in the early '60s, almost every Jewish person was either a Holocaust survivor or had family members who had perished under Hitler; they simply weren’t ready for a dispassionate philosophical tome about a man who had planned and ordered the trains to Treblinka.

Inevitably, with a subject this big, von Trotta’s film can only hint at some of the most mysterious areas, such as the question of Arendt’s intellectual and romantic relationship with Heidegger (Klaus Pohl in the film), a foundational modern thinker whose misguided embrace of the Nazis sent shock waves through academic philosophy that reverberate to this day. I would suggest that what Arendt learned from Heidegger was the importance of independent critical thinking, a lesson he himself failed to apply in his political life. This same absence of thought was evident in the herd-mentality response to Arendt’s provocative articles and also in her subject, a man deemed sane and normal by six Israeli psychologists who became a mass murderer without ever physically harming anyone. That this unwillingness to think for oneself remains a characteristic of our age – and who knows, perhaps of all ages – hardly needs to be said.