My Wikipedia hall of mirrors

Reporting on Wikipedia leads to a Wikipedia page on the reporter. I need some sock puppets, fast! 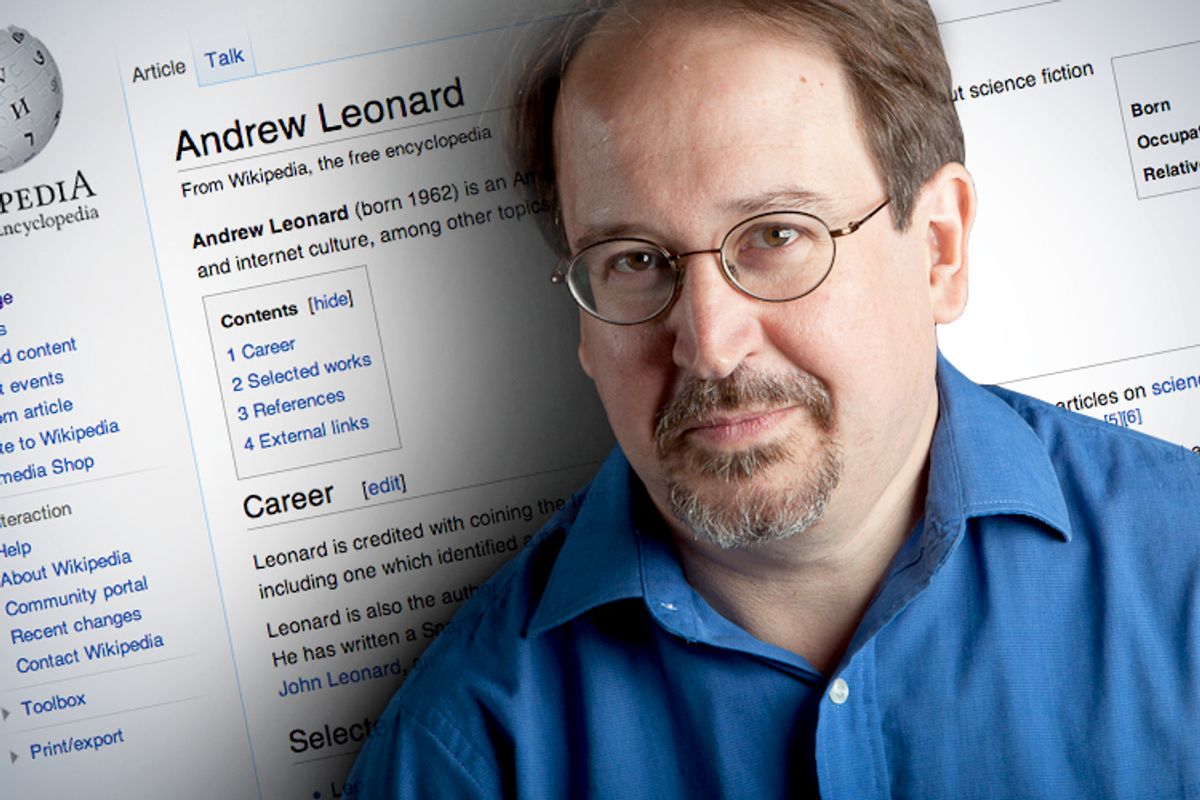 Productivity has been low this morning for reasons of pure self-indulgence. In an unexpected piece of fallout from my investigation of the strange affair of Robert Clark Young, the rogue Wikipedia editor, Wikipedia has decided -- for the moment -- that I am worthy of my own Wikipedia page. For someone who has been writing about "the Internet" for online publications since 1994, this feels like a signal achievement.

It also feels a little like Tom Sawyer attending his own funeral, except it's my birth that is being celebrated (or eventually, perhaps, mourned), and not my passing. It's a strange experience. People I do not know, disguised by their Wikipedia pseudonyms, are constructing a textual version of my identity. Hey! I'm a writer -- isn't that my job?! Shouldn't I be at least involved?

Nope. Not on on Wikipedia. If there's one thing I learned while writing about Young, it's that editing one's own page is considered a severe violation of conflict-of-interest rules. But now I understand why so many writers can't resist breaking those rules. It's crazy making, watching total strangers pick and choose through my online detritus. The temptation to rally my own army of sock puppets and send them forth to bravely edit is difficult to resist.

I've been categorized: (American magazine journalists, American technology writers, Critics of Wikipedia!). I've been summarized: ("Andrew Leonard (born 1962) is an American journalist who writes for Salon.com about science fiction and internet culture, among other topics."). I've got "selected works" and "references" -- some of which seem to be chosen at random. I mean, I love that 16-year-old piece on Xena and fan fiction, but I'm not sure I would place it in my top ten of all time. (How about "Mutiny on the Net," or the chapters on Finland and Bill Joy from my never-finished Free Software Project?) Laura Miller's elegy to my father is included on my Wikipedia page, so why not my own? For six years I wrote a blog for Salon on globalization and economics called How The World Works. But from my bio, you'd never know it ever existed. Sob.

Watching your own Wikipedia page get written, I have discovered, creates a strong urge to re-read Jorge Luis Borges.

I also can't accept that a full 10 percent of my bio is devoted to my skill at cooking oily scallion pancakes. It is true, among certain circles, especially my children, that this feat is my main claim to fame, or as Wikipedia puts it, notability. So I suspect that someone who actually knows me has jumped into the editing fray. Tut tut! I'm afraid that my profound respect for Wikipedia editorial principles requires me to demand that this section be excised. Caesar's wife must be above suspicion! Plus, people are already asking me why I've never cooked them scallion pancakes. Ill will is spreading through my community!

So, real work has ground to a halt here. I can't stop clicking, checking the edit history to see what details are being massaged. But I'm a little disappointed. Where are the fireworks? Where's the drama? The edit-wars? The dire revenge-editing? Why haven't I yet been marked for deletion? Surely I have enough enemies out there sharpening their knives, seething at the bad press I have recently showered on Wikipedia.

Although, I must confess, in a vain and no doubt fruitless attempt to forestall the inevitable backlash, that I fundamentally support Wikipedia's mission. I love you, really, I do. More now, than ever.

UPDATE: Since the publication of this piece, my Wikipedia page has been substantially updated and revised. Information provided here was incorporated, including a lengthy quote about from the story that made the whole "hall of mirrors" metaphor a literal reality. That quote was later removed however, as was a paragraph accusing me of failing to apologize for goading on the Reddit lynch mob during the Boston bombing tragedy. The story is now also illustrated by the photo that illustrates this article, which of course, includes a snapshot of an earlier version of the page. Dizzy yet?