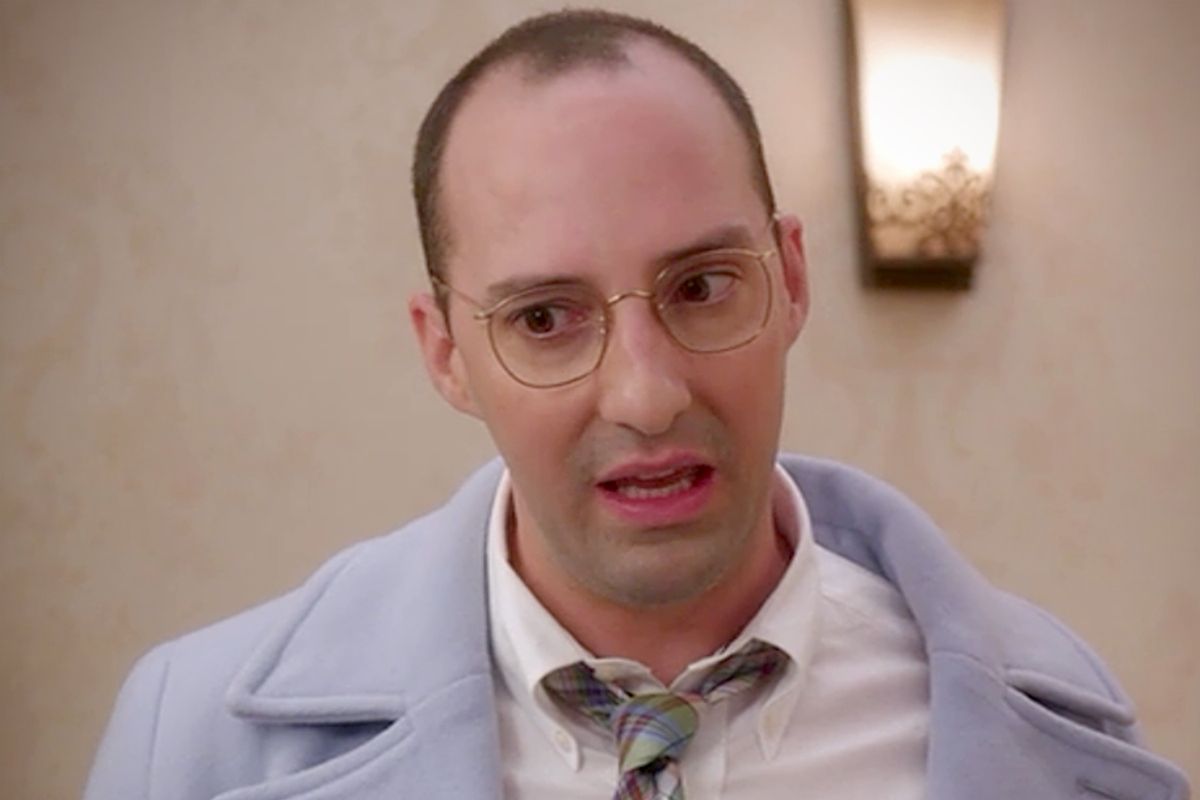 There are a lot of very funny people on television, but no one is funny in quite the same way as Tony Hale, who brings his totally singular and endearing space-idiot vibe and killer knack for line readings to two of TV's strangest, sweetest and, yes, funniest oddballs, "Arrested Development's" Buster Bluth and "Veep's" Gary Walsh, Vice President Selina Meyer's devoted body man. When people talk to him on the street, he gets the sense they are trying to figure out if he's as weird as his characters. He's not.

Hale spoke with me on the phone about both of his shows, the new season of "Arrested" — which he watched on Netflix like everyone else — the similarities between Buster and Gary, and what it was like to wear a giant hand.

Congratulations on "Arrested Development" coming out.

Thank you very much. The most exciting thing right now is I just found my wallet. I was looking all morning for it and literally two minutes before I spoke to you, I found it. So I’m on a high from finding my wallet.

Was it hiding someplace difficult?

Of course it was under a pair of shorts on top of my dresser. I literally destroyed the house looking for it, because I had to take my daughter to school. And you go through this whole thing, “I gotta cancel my credit cards, gotta get a new driver's license,” and then you find it and it’s the best rush.

Can you tell that "Arrested Development" came out this past weekend? Are people talking to you about it?

I’ve gotten a lot of emails from friends and that kind of stuff. If anything, it was fun for me to see it, because none of us had really seen each other’s stuff. We all shot very separately. So the Gob stuff, the Tobias stuff, Maeby’s stuff, I had no clue what was going to happen. And I didn’t really want to know. I didn’t really ask a lot of questions of the cast because so much of the show is a surprise. I remember going to the premiere of “Arrested” in L.A. and on the red carpet all of a sudden there was a huge ostrich. And I was like, “OK. Well, there’s going to be some surprises.” I was very curious.

How many have you seen now?

I think there’s just two more I have to go. I’m not a real binge watcher. I like to savor it a little bit. My wife and I have watched probably three a day. We’ve kind of been spreading it out a little bit, so I think we just have two more to go.

I think it’s funny about binge-watching “Arrested Development” that people are like, “I took a whole five days!” which would be really fast for any other show.

It’s super-impressive. I can’t absorb that much information. I just kind of shut down a little bit. I wouldn't want to wait a week between episodes, but I like a good day between three episodes to process the information.

I watched the new “Arrested” and then I watched the two most recent episodes of “Veep” and there have always been similarities between Buster and Gary, but I started to notice very specific ones. Like, both Gary and Buster are very fixated on lipstick, Selina and Lucille's, respectively.

It’s funny, because we were watching it last night and my wife brought that up and I had never made that connection. She was like, “Wait a second, you were dealing with lipstick with Selina,” and I was like, “That’s great! I never picked up on that.”

And then there’s the moment where Gary is digging through a bag and Selina is like, “You have huge hands,” and Buster has a huge hand on “Arrested.”

Oh my God! Never made that connection! That is hilarious. That is awesome. I never thought about that.

How was it wearing that huge hand?

Amazing. It was fun. The cool thing is I could actually move it. It was like a big glove. They put my hand in a mold and then they took the mold and the computer just stretched it to make it the size it is. So it was actually my hand that stretched. I remember my daughter came with me, it was on the Culver City lot, the day they made it, and my daughter, who was 5 or 6 at the time, she was kind of looking at me like, “What is it that you do? What is my daddy’s job?”

Was it more fun than wearing the hook?

I liked it a lot better than wearing the hook. I loved the hook, it was so much fun to play with, but the glove was different. I could move my fingers.

Do you see a lot of overlap between Buster and Gary?

When you’re doing them it’s just totally separate worlds so I don’t really connect the two. I think Gary steps up to the plate a lot more than Buster. Buster’s in a state of paralysis constantly. Even Buster’s physicality is always on the defense. His hands are always behind his ears, his head’s back, he’s showing off his thousand chins. He’s just always kind of in defense mode, preparing for what’s going to be thrown at him. Gary steps up and he will defend his woman when necessary. I repeat, his woman. Like, he is pretty much in love with Selina.

Does he think that’s going to work out?

Oh, yeah. I think that he thinks it’s going to happen. That’s going to work, in his eyes.

How long has Gary been working for Selina?

He’s been working for her probably since his early 20s and now he’s in his early 40s. It’s been 15 or 20 years. The thing is, Gary’s position, which they call a body man, is mostly guys in their 20s who are in that position for a couple years, because they get so burnt out because their life is 24/7 politician. You have no social life, you have nothing. So then you go on and do other things. But that’s Gary’s dream. His identity has always been Selina, so why would he ever leave that? He’s just going to stay till his 40s because he has no life other than that.

Well, now he has this girlfriend, which seems ... surprising.

Oh, very surprising. She’s very dominant and he’s used to that sort of personality. I think he really likes Dana, his girlfriend, but his first love is definitely Selina. I doubt he would ever say that to Dana, because he avoids conflict at all costs, but he’s not going to break that tie with Selina. And I don’t think Selina is ever going to let him break that tie.

Both Gary and Buster have these very weird, intimate relationships with older women.

There’s definitely a thread of dominating women in Buster’s life. He just hops from one Lucille to the next.  I would venture to say that his next girlfriend’s name is also going to be Lucille. He has this thing about Lucilles. But with Gary, he protects Selina, whereas Lucille protects Buster. Everybody, pretty much, protects Buster.

And that’s really all he wants from people. Protection, mothering.

Well, I think he’s also incredibly selfish. Every adult character on the show is incredibly selfish. Because Buster really just wants a mother.  He wanted a mother figure with Liza [Minnelli, who plays Lucille Two], and then when Liza wanted to bring in the romance, he was like, “okaaaay.” And the same with Herbert Love’s wife. She wanted to bring in the romance, and he was like, “I just want a mother figure.” That’s very selfish. It’s like, why are you playing these women? He has no consideration for what they want. It’s all about protection. All he wants in life is safety. He just tries to find safe places and mother figures.

How stupid do you think Buster is?

He’s got a lot of degrees. But I wouldn’t be surprised if some of that Bluth money went to getting them for him. I don’t know if he really could do the work. I don’t know if he could necessarily get to class. I mean, it’s a big day when he gets to the pharmacy. He probably has a lot of facts in his head, but then he mixes them up. And then when asked a question he doesn’t really know the answer. Like that one time when someone asked him about the map and he thought the blue was the land. He just gets words mixed up. I think he has a lot of love. Both Gary and Buster have pretty significant rose-colored glasses on, especially Buster. I think he does see the best in people and then when the world turns on him, he’s like, “Wait a second."

“Arrested” and “Veep” are both very improv-heavy shows, right?

Well, actually, “Veep” more so because we spend two or three weeks in rehearsal for “Veep.” We get a script and that kind of morphs into something totally different through improv and thinking where our characters would go and everybody’s throwing in wild lines. So it’s this real playground of ideas. And then once we start shooting, for the most part it’s locked after that rehearsal time. But on "Arrested," Mitch really is the mastermind of the puzzle. He’s just the grand puppeteer of it all. So I know that for me to improv something or not say something that’s in the script, I could be taking a piece of the puzzle out that needs to be there for future episodes or a call back to a previous episode. So I’m very specific about, like, there’s a reason that it’s on the page.

Do people come up to you and say “Hey, brother” a lot?

Which you don’t say in the new episodes.

It happens once, I think. Buster is such a part of a different universe, so I think when people come up to me they are more interested in how I sound and how I talk. Am I like that? People are curious about that. Is he really that off?

Would you do more episodes of "Arrested"?

I think all of us would definitely do more whenever it comes. Who knows what’s going to happen, if there’s a movie or whatever, but we all just have such mad respect for Mitch and the writers. The fact that they’ll just go, “Of course you’ll have an excessively large hand.” They’re not afraid to make these brave, crazy departures and risks. I mean, “Of course the model home is now a home for sex offenders.” There are these random tangents they go on, that then they just follow that rabbit trail to see where it goes, and any actor is like, “Yeah, I’m down,” because you have no clue what you’re in for. And that’s the fun of it.