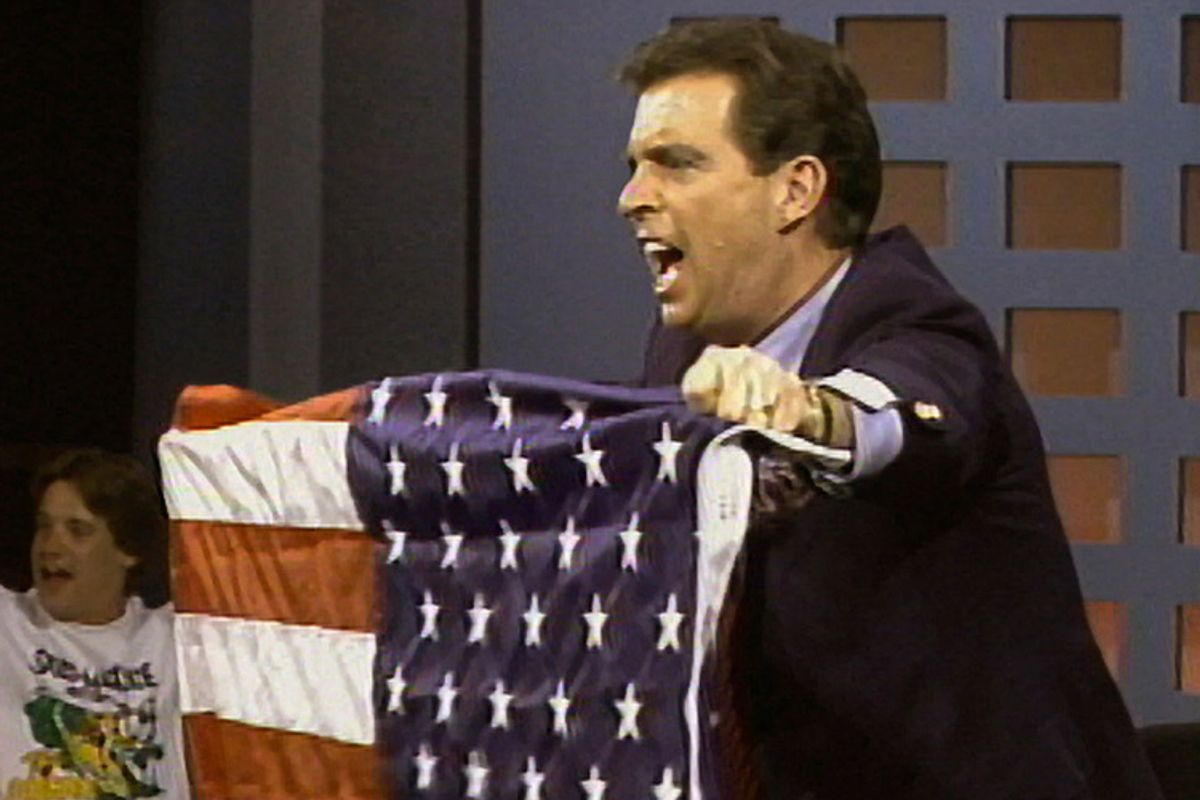 I can't find the source of this quotation, but someone reviewed Alain de Botton's late-'90s self-help bestseller "How Proust Can Change Your Life" by observing that any book about Proust had to face the test of whether you wouldn't be better off just reading Proust instead. By that standard, the new documentary "Évocateur: The Morton Downey Jr. Movie" is golden. Watching a movie about the late trash-TV pioneer turns out to be fascinating, even when his story is told as messily as it is here. Whereas watching Downey himself -- an unleashed teenage American right-wing id, in the body of a chain-smoking middle-aged man -- was so acutely and perversely painful it surely violated several provisions of the Geneva Convention.

If you're younger than 35 or so, you may have encountered some of Downey's outbursts on YouTube, but you can't have much cultural memory of his importance, and may not know how huge he actually was (for a very short time) and how much he changed the media universe. In fact, he had one of the most meteoric rise-and-fall celebrity careers in a medium full of them. In the fall of 1987, he burst out of talk-radio obscurity when his confrontational local TV show became a cult hit on WWOR-TV in Secaucus, N.J. (then a sensation-seeking off-brand station in the New York market). In a talk-TV universe dominated by the female-branded friendliness of Phil Donahue and Sally Jessy Raphael, Downey stuck out immediately. He brawled, he yelled, he cursed, he smoked, he wrapped his ass in an American flag and invited namby-pamby left-wingers to kiss it. He exploded into national syndication the following year.

While his politics were standard-issue Reagan conservatism, Downey was the first talk-TV host to be openly belligerent and abusive toward his guests, blowing smoke in their faces, spewing profanities and encouraging a lynch-mob mentality among his overwhelmingly young, white and male studio audience (nicknamed "The Beast"). If he wasn't quite the first host to understand a political talk show as primarily a form of theater or a revival meeting, rather than a conversation or debate, he pushed that realization to its illogical extreme.

If Downey paved the way for reality TV in one direction and for Glenn Beck, Sean Hannity and Bill O'Reilly in the other -- in other words, for about two-thirds of what people watch on 21st century television -- his show was uglier, more stylistically extreme and flat-out crazier than any of those examples. Although he was in his mid-50s at the time, Downey somehow channeled a strain of young white working-class or middle-class hostility, a pre-Tea Party demographic. (I think of them as the kids who willfully misread "Born in the USA" as a patriotic call to arms.) On one level this strain has always been present in American political life, but this one was also particular to that era. It included hostility to immigrants, foreigners, feminists, gays and lesbians, health scolds, multiculturalists, enforcers of political correctness, liberals in general and anti-Americanism of all stripes. (In fairness, Downey tried to distinguish this grade of pseudo-populism from the most extreme forms of racism or anti-gay ideology, as if to reassure his followers that their views were normal, and not those of Klansmen or LaRouchites.)

In less than two years, Downey went from being a nobody to being one of the biggest celebrities on TV (and a half-serious Republican presidential aspirant) to being a circus clown presiding over a staged, pro-wrestling-style spectacle to being a national embarrassment and a total failure. By the summer of 1989, he had been driven off the air after suffering an apparent mental breakdown and faking a "skinhead attack" on himself in a San Francisco airport bathroom. (One of the less likely places to encounter a band of roving neo-Nazis, it must be said.) By the following year, he was bankrupt. Downey spent the rest of his career hosting poorly rated cable shows or mid-market drive-time radio, before resurfacing on the national stage as a penitent anti-smoking activist after being diagnosed with lung cancer in the late '90s.

I found those scenes in "Évocateur" especially painful: The emaciated Downey, not long before his 2001 death, testifying on the dangers of tobacco or breaking down in tears in a Larry King interview. It's not that I doubted his genuine regret about having served as a role model to countless young people encouraged to smoke by his jaunty chain of on-air cigarettes (as much a part of his TV persona as the Playboy-style lechery and the vaguely yacht-y wardrobe, as if he'd just dropped into the audience of hockey goons from a party at William F. Buckley's place), or his grief at the likelihood of not living long enough to see his youngest daughter grow up. It's more that, as is so often the case with deathbed remorse -- hello, Lee Atwater! -- it arrives too freakin' late to do anyone any good. The cultural damage had been done.

Now, you can make a plausible case that if Downey hadn't come along and done what he did, someone else would have. One biographical tidbit that isn't in this movie is that Downey got fired from radio station KFBK in Sacramento, Calif., in 1984 after referring to a local Asian-American politician as a "Chinaman" -- and the guy who replaced him was an up-and-coming talk host named Rush Limbaugh. Downey's realization that confrontation and vituperation would drive ratings was nothing new, after all. Almost everything about his persona, including the abusive exchanges, the chain smoking and the appetite for controversial guests, was borrowed from Joe Pyne, a TV pioneer of the '50s and '60s. (His catchphrase was, "Go gargle with razor blades.") All Pyne had done, for his part, was to bring the audience that had embraced Sen. Joe McCarthy and Father Charles Coughlin into a new medium.

As you can see, there are tons of interesting material in "Évocateur," which was co-directed by Seth Kramer (also the editor), Daniel A. Miller (the writer) and Jeremy Newberger (the art director). It features file footage of Downey's on-air escapades (including a memorable 1988 exchange with libertarian hero Ron Paul), extensive interviews with those who knew him or sparred with him, and even imaginatively animated episodes to illustrate certain infamous anecdotes. What the film doesn't really possess is a clear narrative or a point of view. There are essentially three different stories, none of which can be adequately fleshed out in 90 minutes.

For one, there's Downey's bizarre but irresistible life story, including the fact that his father, although now forgotten, was an "Irish tenor" recording star of the 1930s and that he himself had a few minor hits as a singer. Downey spent his childhood summers as a neighbor of the Kennedy clan on Cape Cod, and seems to have worked as a staffer or intern in Ted Kennedy's Washington office in the late '60s. (He of course castigated the Kennedys mercilessly during his later career.) Then there's the story of Downey's skyrocket-to-fizzle career as a media superstar, and the bigger and more difficult story about how it changed the culture and what lessons can be drawn from it. That's the one that gets short shrift, although there are a few intriguing hints.

One person who evidently declined to speak to the filmmakers, and for good reason, is current MSNBC host Al Sharpton, who reached a national audience for the first time as a pompadour-sporting, tracksuit-clad civil rights activist who frequently appeared on Downey's show. Sharpton and Downey went nose-to-nose several times over the sad and tragic case of Tawana Brawley, an upstate New York teenager who made false rape allegations against a number of local police officers and officials. But according to Downey's producers, the two men liked and understood each other, and Sharpton learned a great deal about how to function in the media from Downey. (A famous episode when rival activist Roy Innis floored Sharpton during a Downey broadcast from the Apollo Theater in Harlem looked like a setup even at the time.) Viewed this way, the story of a disturbed teenage girl and her damaging accusations was no more than a plot point to both of them, a lever they could use to drive fame and ratings.

I'm not trying to beat up Sharpton in particular, who can take the heat and may have balanced out his gruesome Brawley misstep over the years with his campaigns against police brutality and racial profiling in New York. The larger point is that Morton Downey Jr. built his success on a combination of rhetorical propaganda, name-calling and meme repetition. That combination has no specific ideological content, and its use is by no means limited to the extreme right. If troglodytes like Beck and Hannity are the obvious heirs to Downey's approach -- minus the half-naked strippers getting dry-humped on the air, who moved on to Howard Stern -- liberal-facing hosts like Sharpton and Martin Bashir provide a kinder, gentler version of the same tactics. Watching "Évocateur," I couldn't help thinking that Downey had discovered the defining idea of the Internet long before it existed: It isn't enough that most people, most of the time, want to be congratulated for the opinions they already hold. That's obvious. They also want to hear those who hold other opinions mocked and humiliated, as often and as loudly as possible.

"Évocateur: The Morton Downey Jr. Movie" opens this week in New York and Los Angeles, and is also available on demand from cable, satellite and online providers. It opens June 14 in Miami, June 21 in Denver, June 28 in Seattle, July 5 in Greensboro, N.C., and July 12 in Columbus, Ohio, with more cities to follow.