"Game of Thrones"' Nikolaj Coster-Waldau: Jaime's "not a bad guy"

The actor who plays Jaime Lannister talks bears, Brienne and how he acts without a hand 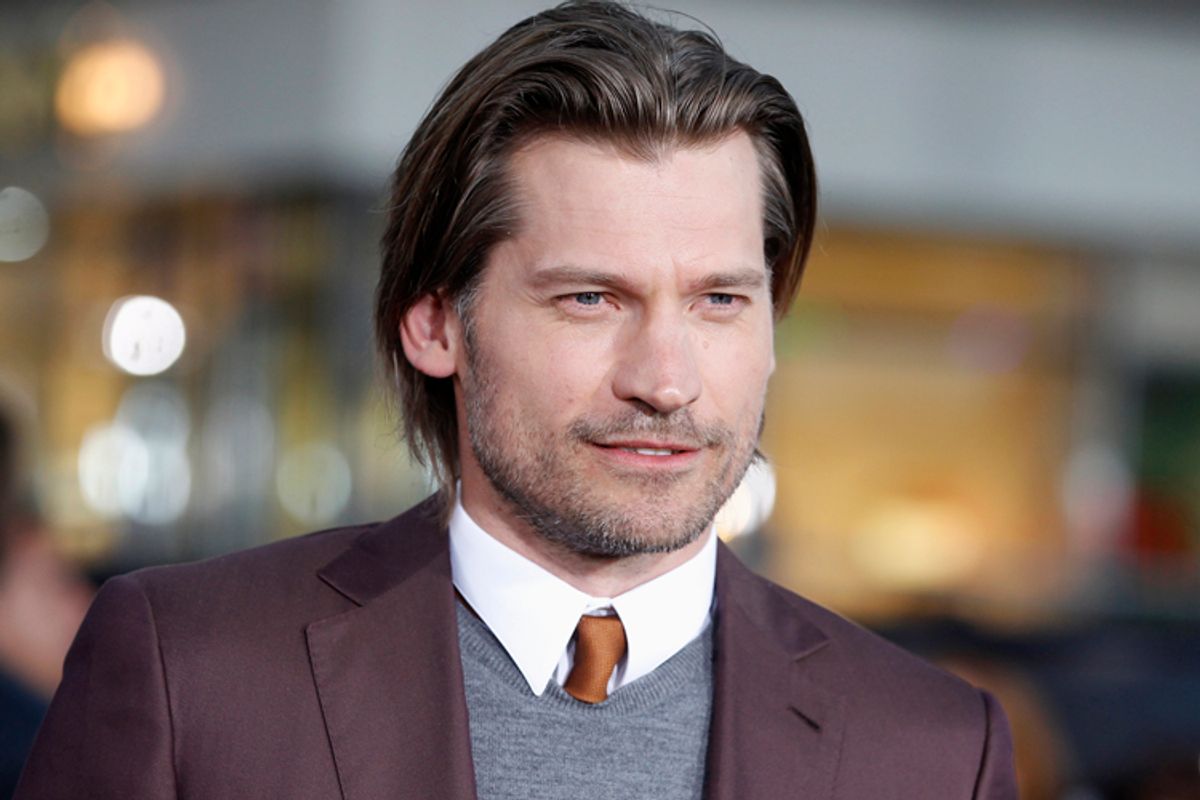 This season on "Game of Thrones," Jaime Lannister has a lost hand, fought a bear, and made a friend, all while taking a long, filthy journey, usually in captivity, across Westeros. Tonight, the third season of the show ends, with Jaime poised to finally make it back to King's Landing -- a King's Landing sure to be buzzing with the the brutal events of last week's Red Wedding. On the occasion of the finale, Nikolaj Coster-Waldau, the Danish actor who plays him, spoke with me about Jaime's friendship with Brienne, the character's "core values," all the places mud can hide on the human body, and acting with a bear.

How has it been to act without a hand?

It’s a little complicated, actually. I have three to four versions [of no hand]. The one in really wide shots, I can use my own hand. We can just hide that. That’s the easiest. But as soon as we get in closer, we can’t do that, so then they have a couple of fake arms that I put on just above my elbow. And then I have to hide my own arm down my pants, in my crack, and that’s a little uncomfortable. And then of course there was the scene we did in the bath, and that was a third version where I spent two hours having this arm attached, again above my elbow, but as a real second limb. And then a few times -- there’s a shot where I walk from the back and they have to use CGI to remove my real arm, so I was wearing this green glove.  I hope they come up with something smart for the next season.

We were first introduced to Jaime, in season one, with him shoving Bran out a window, but over the course of this season, he has become much more sympathetic.

One of the things I like about the show is that you start out and you see them all one way, but it's complicated. The Starks are kind of our heroes and the Lannisters are the baddies, and in many ways they still are. But, imagine the story, if we started years before, and this is the story of the beautiful but impossible love of Cersei and Jaime. We’ve got the movie of these guys, who get each other, but they’ve been forced apart for so long. Finally they meet in this tower and they have the most heartbreaking moment. And then this little guy we haven’t really seen shows up and we’ve been told this kid Bran is a little monster by other characters, a little monster like Joffrey. And we’ve also been told that he kills all these dogs, he’s a dog-killer. And we know that if Bran tells anyone about this Cersei will die, all the beautiful kids that Jaime and Cersei have, and also, by the way, this whole orphanage they’ve all been raising, they will all die. The fact that Jaime pushes this little monster out the window and tries to kill him -- he didn’t have a choice. It was either this little monster kid, or all these orphans and Cersei. One of the things I love about that scene is when Jaime says, “The things I do for love” and then he pushes Bran out. He’s not proud of it, but at the time he knows there are no other options. He knows that if Bran tells anyone, it’s over. He’s going to die, she’s going to die. It would mean the end of the Lannister family. It’s not because he’s an evil psychopath. It’s not something he’s proud of, but he has to do it.

My point is just he’s not a bad guy in my world. I’m not saying he’s a good guy. He’s just a human being. He’s a human being who’s put in a world where choices can have extreme consequences, where he has been forced to deal with life and death, and that’s made him who he is.

But I also think he’s come from a ridiculous world of privilege, and because of what happened with the Mad King, and because of his secrecy with Cersei, he’s lost a lot of his core values, if you will. And I think meeting Brienne kind of reawakens potentially what he could have been. I think of what his father says in season one. He says, “I want you to become the man you were always supposed to be.” I think maybe that could happen now. I’m not sure it’s the same vision that Tywin has, but hopefully that’s what will happen.

His friendship with Brienne has been really humanizing and very sweet.

The writers have done a great job with that. I think one of the things that was nice is that you did sense that relationship was building. When I watch it, of course I’m biased, but it didn’t feel forced. And I think that relationship means even more than he himself is probably aware of. The fact that he now risked his whole life to save her -- I’m pretty sure he wouldn’t have believed you if you’d told him, “Dude, you’re going to risk your life for someone you’ve never met before, who’s outside the family.” So that’s a huge thing, that’s a huge change.

And I think his being away from that family has been good for him. It’s been a very tough time. He’s been chained up for so long, he’s come from a world of privilege and he’s basically been sitting in his own shit for so long, and he’s had to deal with that. And the thing with the hand, it’s such a monumental thing that forces him to reevaluate and reidentify who he is. Do you say that, reidentify? Rediscover! That was the word. Rediscover his identity.

How was it to shoot that Brienne rescue scene with the bear? It looked awesome.

That was an amazing scene. It was quite something. We shot all the stuff with the bear pit and all the extras in Belfast. But we didn’t have a bear there. There were no bears in Europe that could do the job. Apparently, there was only one place where we could find a bear that was good enough, and that was in L.A. Well, we met him in L.A., but he’s kept in Utah I think. But anyway, Bart the Bear the Second was his name, and he’s a bit of a diva, but he did an amazing job. And it was really one of those things where you just go, “This is crazy. I’m standing with a real bear on this set. How the hell did that happen?” But when I saw the scene, I thought it was an amazing sequence. When you see Brienne in the pit with the bear, clearly a real bear, you kind of go, “That’s crazy!” But it’s such an important moment for Jaime, because you don’t jump into a bear pit to fight a bear. It’s crazy.

And afterwards, Jaime got some of his swag back.

I know, I was so happy he got to say that line to Locke. When he leaves, he says, “Sorry about the sapphires.” It was nice. We kind of need him to get his groove back, as you will. Even though this guy has this depression with his hand, he’s still the same guy and he still has his wit, so I was just thrilled to see that he still had that.

During the many, many scenes this season when you were covered in mud, was it really mud?

I do have scenes where I’m fighting guys in mud, and of course it’s mud. It never ceases to amaze me once I finally get back to the hotel late at night and I have a shower to see how much could still be hidden around the various parts of your body. But on the face, I think the makeup is called mud, but they have to control it. It’s some kind of makeup that looks like dirt. There’s the scene where I arrive at Roose Bolton’s and they put me into this pool of dirty water. That was just dirty, muddy water. I love it when it’s the real thing, because then you just deal with that and you don’t have to worry about anything. Sometimes makeup can get in the way. If you’re too specific with changing a hair, it can be really frustrating. But hopefully Jaime will get back to King's Landing and I’ll have a real bath. I was talking about this on set one day, I was like, “The smell of Jaime after months and months of captivity, where he’s basically sitting in his own shit, wow, that just must be really baad."

Do you watch the show in real time?

Yeah, I do watch the show. I saw it on Sunday.

People had really strong reactions to the last episode. How was it for you?

Well, I knew it was coming. I thought the whole ending was so powerful. I spoke to the actors about the scene and how it’d been to shoot it and of course it was the way it looked, gruesome and very emotional. A friend showed me a collection of videos of people who have filmed their friends and family watching those last five minutes, and it was almost touching to see how invested people are in the show and the characters. The reaction to these deaths, they took it very personal. Which is great. One of the things I love about the show is that it’s heartbreaking at times, it shows no mercy, but at the same time it does make sense. It is truthful to itself. Even though everybody loved Richard Madden and Michelle Fairley, they had to go, because that’s what was right for the story. I’ll miss them as colleagues and I’m going to miss them as characters, but the show, it’s what sets it apart, in many ways.

At the current pace -- two seasons per book -- there could be 9 more seasons.

Yeah, we’re using two seasons for book three and I think the rest would be one season per book, but who knows? I don’t, thank God, make those calls. But I hope we get to go a long time.