"Man of Steel": Truth, justice and the Nietzschean way

Superman gets a massive, expensive reboot from Chris Nolan and Zack Snyder that feels way too "Dark Knight Lite" 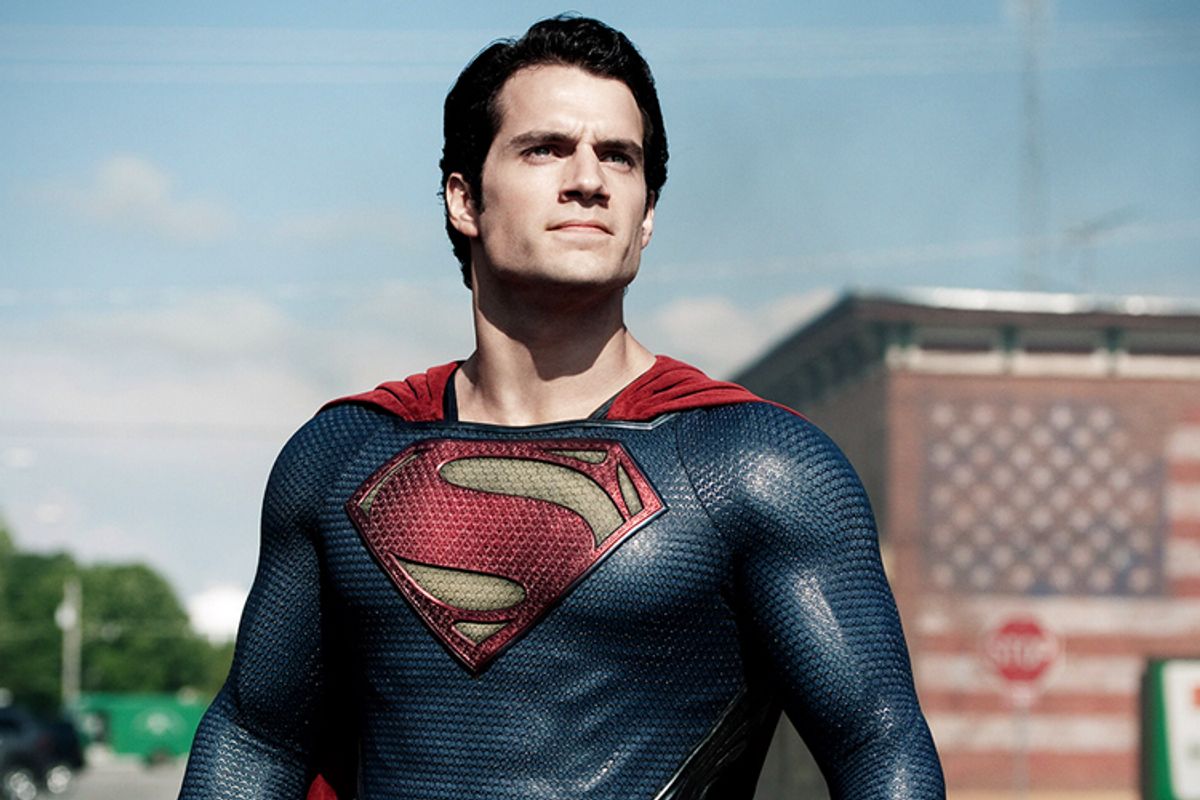 If no movie like “Man of Steel” had ever been made before – an attempt to darken up a superhero legend with a little mythological depth, some cutting-edge cinematic skills and a whole bunch of action – then Zack Snyder’s brooding and seemingly endless 143-minute Superman reboot might feel like a breakthrough. (I guess the "Superman Returns" reboot from 2006 really didn't take.) To be fair, “Man of Steel” has an idea behind it and superior production design, which puts it ahead of a whole bunch of Hollywood movies. Superman aficionados will no doubt find it suitably canonical, with an extended prologue set on the dying planet of Krypton, even if Superman’s classic uniform is now made of that inevitable nylon-mesh athletic fiber that supposed to suggest contemporary coolness (if you’re 12 years old and really into LeBron James).

But despite looking, feeling and (especially) sounding expensive – this is one of the loudest summer spectacles of recent years – “Man of Steel” is second-tier and third-generation Chris Nolan-flavored neo-superhero material. Nolan chose not to direct this film, but co-wrote the original story with David S. Goyer (who wrote the final screenplay) and is one of the producers. I feel at least some compassion for Snyder, a director of immense ambition and technical skill whose work has yielded intriguingly mixed results in “Sucker Punch,” “Watchmen,” “300” and other movies. Here he finds himself in the impossible position of trying to put his own stamp on material that feels a lot like “Dark Knight Lite,” while avoiding the impression of serving as Nolan’s surrogate or transcriber.

Unfortunately he can’t pull it off, and “Man of Steel” has all the Nolan-esque tics you expect, from the Leni Riefenstahl heroic extreme close-ups to the oversize muscles and proto-fascist (or flat-out fascist) iconography to the creepy-looking technology ripped off from “Alien” to the assaultive and incoherent action sequences that go on so long you yearn for death, or at least for deafness. In the best moments of the “Dark Knight” trilogy, Nolan made you feel like the movies captured a certain gloomy or cynical insight into human nature, and in particular into the cycles of corruption and delusion that drive human politics. But while Batman is an isolated and peculiar rich man with human failings, Superman is a godlike being from another galaxy, created to inhabit the infantile fantasy lives of young children. Any attempt to invest him with philosophical depth risks becoming moronic and/or offensive almost immediately.

Indeed, it feels as if the idea for “Man of Steel” emerged from a sultry afternoon meeting when Goyer and Nolan played air hockey and drank Mountain Dew for hours until one of them said, “Hey! Superman! Didn’t Nietzsche write a book about him?” When it intermittently pretends to be about something, “Man of Steel” tries to split the difference between the old DC Comics or TV serial Superman, a square-jawed dude devoted to “truth, justice and the American way,” and the entirely different Nietzschean concept of the Übermensch, which even scholars of philosophy have a tough time pinning down. Superman is beyond good and evil, but chooses the ideology of Americanism, out of the infinite options available to him, in order to placate the idiotic sheeple of our planet. Or something like that.

Back on Krypton before the whole place blows up, Superman’s dad Jor-El (a suitably grave and hirsute Russell Crowe) makes clear that he understands his infant son will be received as a god by the lesser beings of Earth, and will form a kind of mystical bridge between his own people and ours. (I hadn’t noticed until now how much the Superman story resembles Mormon theology, or Scientology.) Once the baby Kal-El lands in Kansas and becomes Clark Kent, his human dad (Kevin Costner, with hitched-up jeans and a bad haircut) keeps telling him that he will be a singular figure in human history, but that he needs to keep his remarkable gifts hidden until he can master his own will and understand his own mission. I don’t dispute that you can find stuff like this in previous iterations of the Superman story, but Goyer and Nolan are clearly drawing on Nietzsche’s idea of the superman or “overman” as a transcendent, transformative figure who will create a new set of values in the moral vacuum left behind by the death of God.

Bet you didn’t think we were going there in a review of a summer popcorn movie, did you? Yet at the same time there’s a profound confusion at work in “Man of Steel,” because Snyder, Goyer and Nolan also want to identify Superman with the last transformative, otherworldly dude to put in an appearance here, 2,000 or so years ago. In this telling, Clark bums around for most of his young adulthood, working odd jobs and stuff (though I guess he’s not actually a carpenter) before mastering his powers and unveiling the Superman persona at age 33, a fact mentioned several times. When the Kryptonian renegade General Zod (Michael Shannon, enjoyable as ever, with a goatee and a Roman-emperor haircut) shows up on Earth and demands the surrender of Kal-El, the adult Clark (Henry Cavill) goes to visit a priest or minister and tells him about his true identity. Just in case we haven’t gotten any of this so far, cinematographer Amir Mokri frames Cavill before a stained-glass window depicting You Know Who, I think preaching the Sermon on the Mount.

Christian iconography is nothing new in the Superman universe either – the Christopher Reeve movies were loaded with it – but my real point is that the organizing principle of “Man of Steel” seems to be a little bit of this and then a little bit of that, religion, philosophy, blah blah blah, and when things start to get dull let’s pump up the volume and fling some locomotives around. Following the lead of “Star Trek Into Darkness” and other recent summer spectacles, Snyder depicts an apocalyptic battle between Superman and Zod that inflicts planetary devastation on a scale hundreds of times larger than 9/11, with no real acknowledgment of death or suffering or moral consequences that might endanger the PG-13 rating.

Crowe, Costner and the diabolical Shannon (who seems to be channeling his own version of the Ricardo Montalban role in “Star Trek II: The Wrath of Khan”) are by far the best things about the movie, managing to seem like recognizable humanoid types in this arid landscape. I also enjoyed Diane Lane as Clark’s Kansas mom, even if the role mainly involves beaming adoringly at her marvelous son. As Superman and Clark Kent, Cavill is a big, handsome and undeniably impressive slab of beef, genial enough but with no visible personality. Amy Adams, one of the best character actresses in American movies, can’t do much with intrepid reporter Lois Lane, perhaps the most boring of all boring female characters in the boy-centric world of comic books. (German actress Antje Traue is far more memorable, as General Zod’s smoldering and sinister gal sidekick.) But all these people pale before the impressive, monumental and supremely empty effects, along with the general mood of forced-march exhaustion and pointless effort.