"She's All That" was M. Night Shyamalan's greatest film

If only he'd stuck with teen comedy! 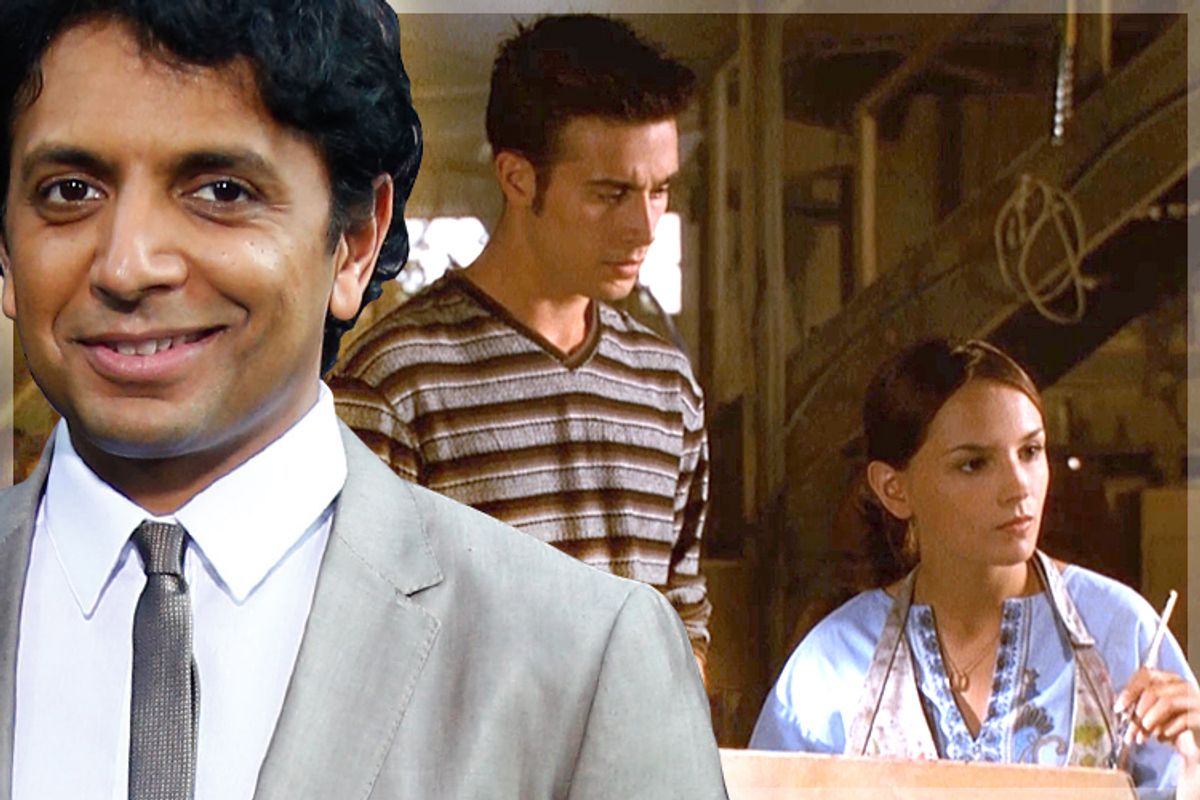 It was a twist no one could have seen coming. A shocking reveal 14 long years in the making. On Tuesday, NME picked up on a quiet little tidbit that M. Night Shyamalan let drop during a recent interview on Movies.com to promote his dismal, fated-to-fail "After Earth." When asked about his trademark "brand," Shyamalan mentioned that the same year he made his mark with "The Sixth Sense," another film he'd written also came out. "I don't know if I want to tell you which movie I ghost-wrote," he said, before fessing up the truth. "I ghost-wrote the movie 'She's All That.'" Oh my God, of course he did. It all makes sense now!

"She's All That" is an above-average late-'90s teen romance. In other words, it's M. Night Shyamalan's greatest film. Not only that, it's a singularly M. Night Shyamalan late-'90s teen romance. It's a Pygmalion tale of a popular boy who, jilted by his girlfriend for an obnoxious "Real World" reject, accepts a bet from his toxic buddy that he can turn an awkward, artsy wallflower into school prom queen. But along the way, will there be reversals of expectations? Will the characters develop genuine romantic feelings for each other? (Spoiler: GUH DOY OF COURSE.)

What makes "She's All That" all that? Let me count the ways. It was filmed at the same high school that served as the iconic backdrop for "Buffy the Vampire Slayer." It's the best thing Freddie Prinze Jr. has ever done, after "Robot Chicken." It features an adorable, scene-stealing Anna Paquin and a young Paul Walker, playing somebody other than Brian O'Conner. It has Usher as the school DJ, at a time in his career when he still had a last name. And I don't care that Shyamalan got nominated for an Oscar for "Sixth Sense." That movie has dead people. "She's All That" has a prom night dance to "The Rockafeller Skank," choreographed by the fabulous Adam Shankman, who went on to do "Hairspray" and "Glee."

But what truly makes "She's All That" the apotheosis of Shyamalanism is that it's a good script -- and I'm not just talking about the phrase "Supersize my balls." Sure, Shyamalan can't help borrowing heavily from everything that has ever gone before, as is his typical wont. But he also manages to come up with a delectable pile of frothy dialogue, giving his teenage characters "major wiggage," "rebound skank," "dork outreach programs" and "all-around bad-ass mamba-jahambas." There's Jodi Lyn O'Keefe's icy declaration that "You're vapor; you're spam, a waste of perfectly good yearbook space " to the nerdy heroine -- a moment considerably more chilling than anything that went down in "Unbreakable." There's a scene of freaky performance art in which a character intones, "My soul is an island; my car is a Ford." Back then, Shyamalan could do that and know it was a joke. Years later he would have characters say things like, "This color attracts Those We Do Not Speak Of" in complete seriousness. Back then, he could write a movie with an elaborate scene involving a pubic hair-covered pizza. You didn't see that in "The Last Airbender," now did you?

"The Sixth Sense" came out the same summer as "The Blair Witch Project," a summer that was short on gore, long on heady supernatural dread. Both films were surprise hits, films that wowed at the time thanks to their clever deployment of chills. And they both, in their own special ways, ruined their filmmakers. "Blair Witch's" Daniel Myrick and Eduardo Sánchez did a universally loathed sequel and then faded into relative obscurity. Shyamalan, tragically, made several more movies. He made that movie where Adrien Brody got stabby and the one where Joaquin Phoenix saved the earth by (spoiler!) taking a tip from Dorothy Gale. He made the one with Bryce Dallas Howard as a magical water nymph that I’m too tired to explain. Most recently, he made that thing with Will Smith that might have been about Scientology.  And horribly, he has acted in these movies as well.

Cruel fate has trapped us in this reality, the one where Marky Mark and the most adorkable woman in the world battle suicide-inducing zephyrs. (Spoiler: THE TREES DID IT.) It has given us 14 years of increasingly pretentious, shlocky garbage. Had he charted a different career course, Shyamalan could right now be cranking out the third of some phenomenal Chloë Moretz trilogy and directing a Broadway musical version of "Mean Girls." He could be helming a bubbly sitcom starring his "She's All That" support stars Gabrielle Union and Clea Duvall. Instead, he's executive producing some otherworldly drama for Fox that's being branded as "Twin Peaks"-style and promising (Spoiler!) "twists and turns." And with his admission of his past as the driving force behind a Rachael Leigh Cook vehicle, he's given moviegoers stunning proof of what his critics have been saying for years. The guy peaked in 1999. We just didn't know what his true masterpiece was till now.

After Earth Lady In The Water M. Night Shyamalan Signs The Happening The Last Airbender The Sixth Sense The Village