The new season, campy as ever, strips vampires of their rights 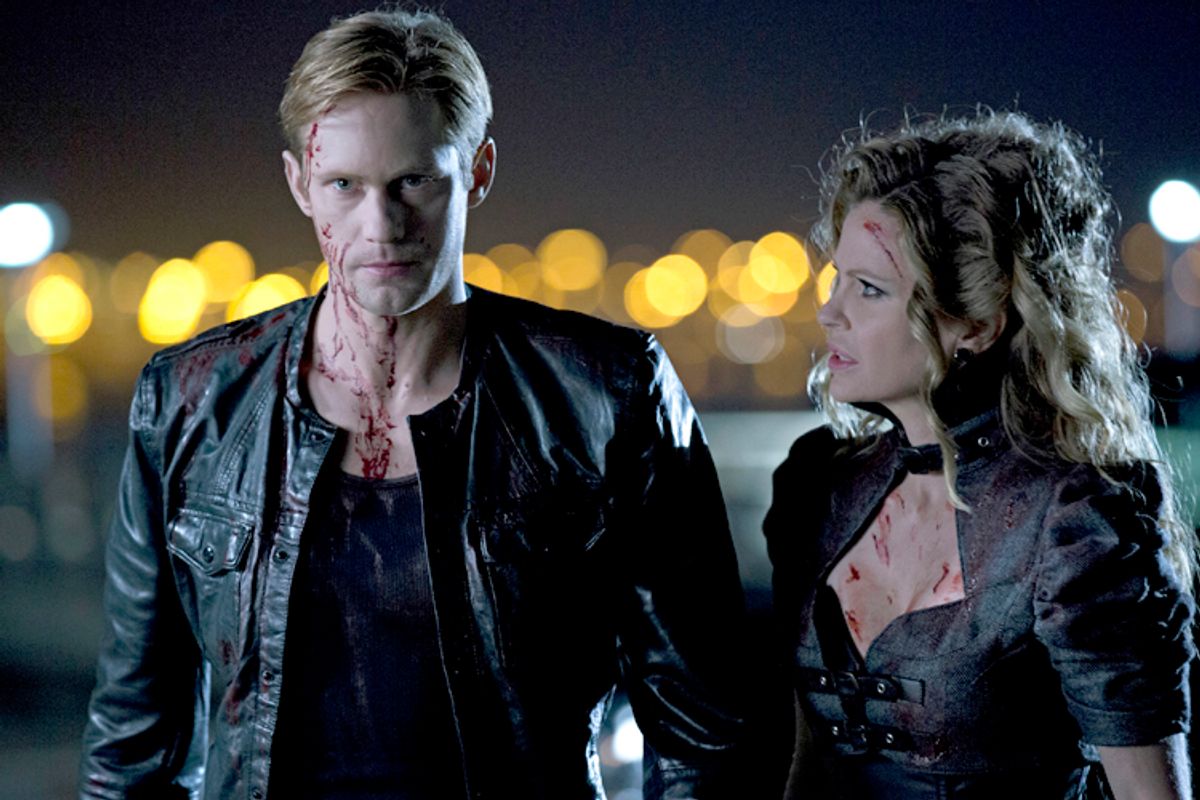 “True Blood” begins its sixth season on Sunday night in medias res, in the middle of a vampire fight that started in last season’s finale. It’s dark, the earth is shaking and Sookie Stackhouse (Anna Paquin), Eric Northman (Alexander Skarsgard) and a quartet of their allies are running from a newly powerful Bill Compton (Stephen Moyer), who looks like he recently washed in Carrie’s post-prom pig’s-blood bathwater. The sequence is hard to follow and over the top -- vampires keep disappearing in puffs of blood -- but titillation, not coherence, is “True Blood’s" mission. Getting exasperated at it for being as silly, faux-sexy and dim as Jason Stackhouse (Ryan Kwanten) is like hating on a swimsuit calendar for not containing helpful bits of wisdom. Don’t go shopping for sense at the nonsense store.

Each season, “True Blood” picks up an allegory, tosses it around for a few episodes, and then tosses it aside. In the past, vampirism has been used to gesture at homophobia, racism, religious fundamentalism, terrorism, and addictions of all kind. This season, “True Blood” takes a desultory stab at the Holocaust -- and has a B-story that references the Freedom Rides for good measure.

Due to the events of last season, there’s a shortage of the synthetic Tru Blood and the vampires in Louisiana, starving, are taking to the streets at night and eating people. The Governor uses this as the excuse he’s been waiting for -- he institutes a curfew, rescinds Vampires' legal rights, and shuts their business. The Governor has also spent the last few years developing more effective vampire weaponry: guns that shoot silver-UV bullets and contacts that protect their wearer from glamouring. Vampires caught breaking curfew or any other law are not put in jail but taken to a “camp,” where experiments are being run and Dr. Mengele vibes abound. The humans are “taking the fight” to the vampires, and Eric, anyway, is pissed: “If the humans want war, we’ll give them war,” he sneers.

Meanwhile, Bill, thanks to drinking some of OG vampire Lillith’s blood, has developed so many new superpowers he thinks he might be god. He can move things with his mind, enter people’s house’s uninvited, survive a stake to a chest, and see the future. In one of his visions of he sees his vampire pals being mass exterminated in gas chamber-like rooms, but with the sun instead of Zyklon B. (Complicating the Holocaust connection is that Bill, who can now feel the pain and death of other vampires, may also be a Messiah figure, meaning the guy who will stop the allegorical vampire holocaust is an allegorical vampire Jesus.) He decides he must put a stop to this. Presumably, despite their differences, and as always, Bill and Eric will eventually team up to stop the bigoted humans.

Even more so than in season’s past, the non-vampire storylines seem irrelevant and extraneous. The shapeshifters and werewolves are so marginalized, they might as well not have storylines, though then “True Blood” would have had to go without a Joe Manganiello-led threesome, thus failing to fill its sex quota. The fairies are more connected to the main plot, thanks to the fairy Sookie, who this season is being hunted by a very bad, very old vampire. Her grandfather, played by Rutger Hauer, shows up to assist her, as does a handsome new fairy hunk, who immediately falls for Sookie, because every time an able bodied guy appears on this show that's what has to happen. The fae storyline at least gives Jason an occasion to chortle, “I’m a fairy prince!” which, it turns out, he’s not even. But it's fun to hear him say, and that's about all anyone should be asking of "True Blood" at this point anyway.