This is how you talk about military sex abuse

A blistering message from a general gets everything right 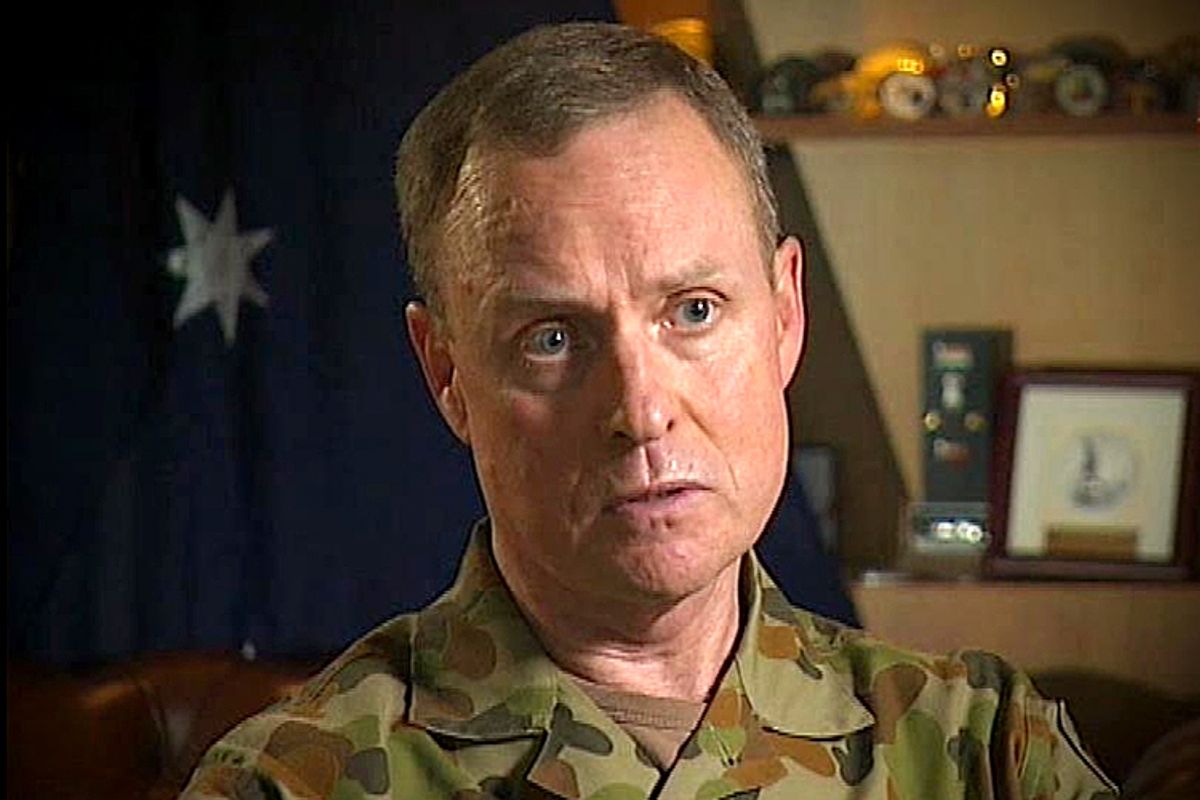 American military, please take notes. This is how you address a sexual abuse problem.

Army chief Lt. Gen. David Morrison revealed that 17 military personnel, including officers, are under investigation for allegedly producing and disseminating "highly inappropriate" emails and images demeaning to women. Three individuals have been suspended, and 90 more Australian Defense Force personnel have been implicated in the email chain. Morrison says, "The matters both textural and imagery are demeaning, explicit and profane."

Last year, an Australian government report uncovered over a thousand alleged incidents of sexual "and other" abuse between the 1950s and the present. And the latest revelations come at an especially gruesome moment for Australian misogyny. Earlier this week, it was revealed that a recent Liberal National Party fundraising dinner's menu featured a Prime Minister Julia Gillard "Kentucky Fried Quail" with "small breasts, huge thighs and a big red box." The restaurant's owner, Joe Richards, later referred to it as "a light-hearted joke," which certainly sounds pleasanter than "aggressive BS." And then on Thursday, during a radio interview, host Howard Sattler grilled Gillard about her partner Tim Mathieson's sexuality. "You hear it. 'He must be gay, he’s a hairdresser,'" Sattler said, before asking, "You can confirm that he's not? You're in a heterosexual relationship? That's all I'm asking."

So in light of so much demoralizing, depressing news, Morrison's choice to address these new revelations with a forceful statement is particularly welcome. In a video released Wednesday, a clenched-jawed, simmeringly furious Morrison says, "Those who think that it is OK to behave in a way that demeans or exploits their colleagues have NO place in this army ... Female soldiers and officers have proven themselves worthy of the best traditions of the Australian army … If that does not suit you, then get out ... The same goes for those who think that toughness is built on humiliating others … The standard you walk past is the standard you accept." Holeeee. Efffing. Crap. It's brilliant.

The words are powerful. But the utterly credible fury is what nails it. It is a validation of the frustration and anger a whole lot of people who have been on the receiving end of that "toughness" have been enduring for a very long time. And it says, yeah, you're right. This is goddamn outrageous.

Here in the U.S., the military has been plagued by similar bombshells of abuse, harassment and hostility, spurred in no small part by the groundbreaking crusade of "The Invisible War." Much to the military's embarrassment, it has of late had an uncanny knack for  finding sex abuse investigators who then have promptly found themselves investigated for sexual battery, abuse and even pimping. And last month, when Sen. Kirsten Gillibrand called for independent military prosecutors in sex abuse cases, Gen. Martin Dempsey whined that such autonomous investigation would "undermine good order and discipline" and be "extraordinarily damaging to the nation’s security."

In the U.S. and Australia and around the world, the plague of abuse needs to be openly addressed and firmly dealt with. And in a culture of rampant aggression, it needs more leaders like Morrison, who are willing to express their contempt for offenders. Leaders who are willing to demand, of "every one of you," to "Show moral courage and take a stand."