Wendi Deng could be Murdoch's toughest adversary yet 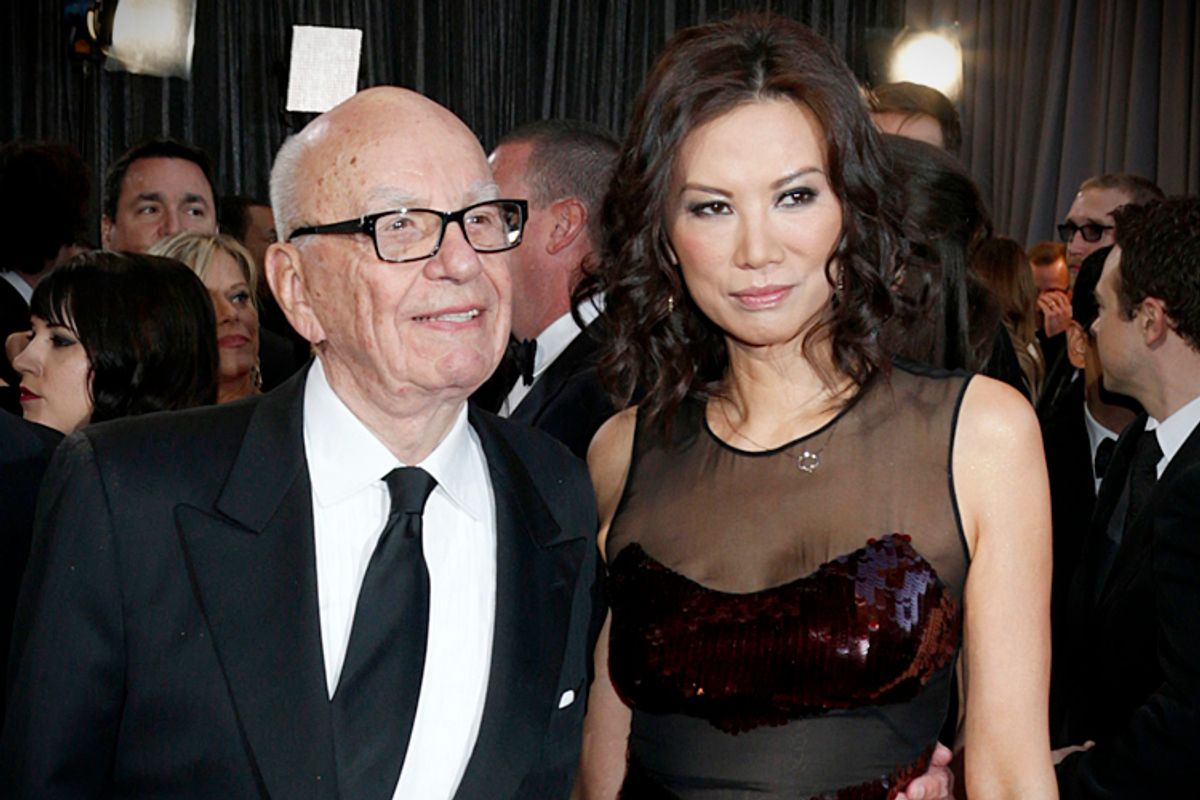 When the news arrived Thursday that Rupert Murdoch, the 82-year-old tabloid mogul, was divorcing his third wife, that collective "Hmmmmm …" you could hear gently humming across the land was the sound of a million minds racing to the same thought. Say now -- Wendi Deng Murdoch is available.

Murdoch, as the Times reports, may have been of late too preoccupied "steering his $73 billion media conglomerate, News Corporation" (I'm sure we can all relate) to pay attention to his wife, but she has not gone unnoticed by the rest of us.

The 44-year-old Chinese-born businesswoman, whose birth name literally means "cultural revolution," has led a colorful life. As she told Vogue two years ago, "I grew up in a little funny town called Xuzhou, in the countryside, very poor. We didn't have hot water." By the time she was in her early 20s, however, she had an MBA from Yale. She has been a media executive and film producer. She is the mother of Murdoch's two youngest children, Chloe and Grace. But what she is most famed for is her thoroughly no-nonsense loyalty to the man who is now divorcing her.

In 2011, during the hearings into News Corp.'s notorious, privacy-trouncing hacking scandal, Deng distinguished herself as a doting, pink-clad wife. She sat behind her man, patting his back and pouring him water. But when a protester burst into the room, aiming a shaving cream pie at Murdoch, that's when she really showed her stuff. Before security could take over, Deng had already leapt to her feet and slapped him down. The tall, willowy former volleyball player treated the guy's face like she was trying to get it over the Net, and then tenderly wiped shaving cream off her husband. Her friend Diane von Furstenberg said at the time, "Nothing can characterize her more than that."

So what could have prompted the split, which is reported to have been initiated by Mr. Murdoch? Well, Deng's romantic track record is a bit checkered. She came to the U.S. in the late '80s under the sponsorship of an American couple, Jake and Joyce Cherry. By 1990, Deng was married to the 30-years-older Cherry, and conveniently had her green card as well. When asked if she'd been having an affair with him, Deng has simply replied, "Yep." The timing of her current marriage is also notable -- Murdoch met her while married to his second wife and tied the knot with Deng less than three weeks after their divorce. "Who wouldn't fall in love with a beautiful woman like that?" Murdoch, who openly calls her "tough," has said. For what it's worth, Tony Blair's representative already had to issue a statement Thursday assuring the world that he's not banging her. "If you are asking if they are having an affair, the answer is no," his spokesman says. Imagine for a moment what it must be like, to be the kind of woman the former prime minister has to officially deny shagging.

Perhaps there was a specific motivation for the divorce, or perhaps the couple just drifted apart, as is so often the case in these octogenarian billionaire-volleyball player MBA romances. But of all the ballsy moves in Rupert Murdoch's career, you've got to wonder if breaking up with Wendi Deng was his most reckless. Good luck to you now, sir. Because you may be one of the most powerful men in the world; you may control much of the global news media; you may be worth several billion bucks, but if you have pissed of Wendi Deng, she will go full-on "Game of Thrones" all over you and yours. Because that, right there, is a woman who plays offense.