From Ike to "The Matrix": Welcome to the American dystopia 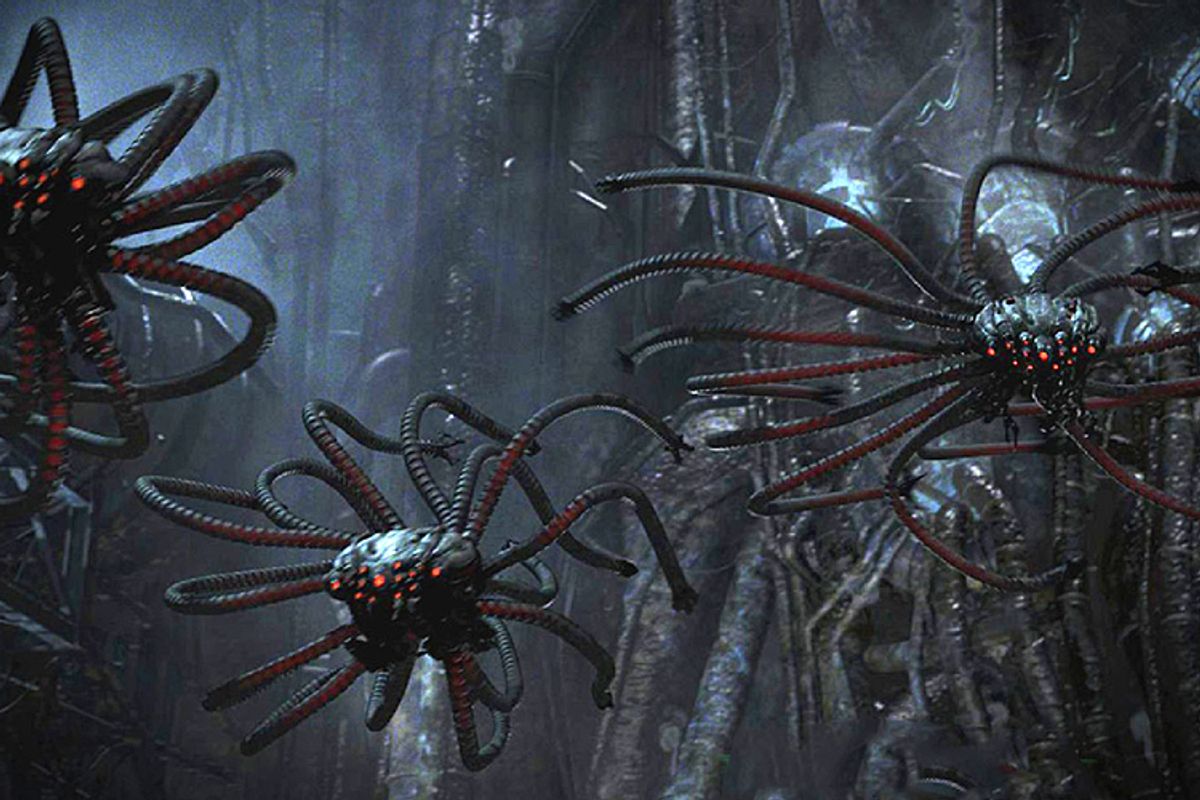 American society has been sliding toward the realm of dystopian science fiction -- toward a nightmarish mishmash of George Orwell, Aldous Huxley and Philip K. Dick -- since at least the early years of the Reagan administration, and arguably a lot longer than that. (Since Watergate? The Kennedy assassination? The A-bomb? Take your pick.) We may have finally gotten there. We live in a country that embodies three different dystopian archetypes at once: America is partly a panopticon surveillance-and-security state, as in Orwell, partly an anesthetic and amoral consumer wonderland, as in Huxley, and partly a grand rhetorical delusion or “spectacle,” as in Dick or “The Matrix” or certain currents of French philosophy.

Let’s step away from the brainiac analysis for a second and give full credit to the small-town Republican and war hero who warned us about what was coming, more than 50 years ago. In his 1961 farewell address, President Dwight Eisenhower spoke gravely about “the potential for the disastrous rise of misplaced power” that lay in the coming coalition between “the military-industrial complex” and “the scientific-technological elite.” It would require “an alert and knowledgeable citizenry,” Ike cautioned, to make sure this combination did not “endanger our liberties or democratic processes.” As we say these days: Our bad.

I can’t find any direct evidence that Eisenhower had ever read Orwell’s “1984” or Huxley’s “Brave New World,” let alone that they shaped his insights into the heretical possibility that the alternative to Soviet-style Communism might turn out to be just as bad in its own way. Ike wasn’t the country bumpkin that many East Coast intellectuals of that era assumed him to be (English was his best subject at West Point), but he favored history and biography over literature and philosophy. His dire and all too prescient vision of the American future was no doubt drawn from the cultural climate around him, so perhaps he can be said to have absorbed the Orwellian vision by osmosis and made it his own. (Intriguingly, his granddaughter Susan Eisenhower, an eminent foreign policy expert, seems aware of the connection and cites “1984” as a formative influence on her own career.)

After the recent revelations about grandiose NSA domestic surveillance campaigns, complete with PowerPoint presentations that look like material from an unreleased mid-‘90s satire by Paul Verhoeven, we learned that sales of one recent edition of Orwell’s “1984” had apparently spiked by almost 7,000 percent on Amazon. Are these facts actually connected? Are these facts even facts? There’s no way to be sure, which may illustrate how difficult it is to know or understand anything amid the onslaught of pseudo-information. Maybe our current situation (as many Twitter users observed) owes more to Franz Kafka than to Orwell.

If people are really going to read “1984,” instead of just throwing it around as a reference, that can only be a good thing. (You can also watch Michael Radford’s excellent film version, with John Hurt and Richard Burton – actually released in 1984! -- online right now.) It’s a devastating novel by one of the best writers of English prose of the last century, and a work that shaped both the thinking and the vocabulary of our age. But as a predictor or manual for the age of permanent war, permanent political paralysis and Total Information Awareness (Adm. John Poindexter’s much-mocked predecessor to PRISM), it gives you only part of the story.

If the technology of the national security state has finally caught up with, and indeed surpassed, anything imagined by Orwell’s Big Brother, who must rely on two-way “telescreens” and regular old secret agents to keep tabs on every citizen, the context is almost entirely different. Writing in the immediate aftermath of World War II, Orwell imagined an indefinite combination of postwar British poverty and austerity mixed with the drab, monochromatic austerity of the Soviet Union during the worst of the Stalin years. He was also imagining the aftermath of a future world-transforming war that would be even worse than the last one. Although it’s more widely understood as a political metaphor, “1984” also points the way toward “Planet of the Apes,” “The Hunger Games” and countless other post-apocalyptic visions.

Our own society, with its endless array of electronic gizmos, opulent luxury goods and a vibrant and/or morbid pop culture capable of invading every waking moment (and the sleeping ones too), looks nothing like that. At least on its surface, it more closely resembles the pharmaceutically cushioned, caste-divided and slogan-nourished Dr. Phil superstate of Huxley’s “Brave New World,” which is built around constant distraction and consumption and in which all desire for transcendence and spirituality can be answered with chemicals. But we certainly don’t live in the atheistic, full-employment command economy envisaged by Huxley either -- he was imagining an unholy technocratic union of Lenin and Henry Ford -- even if many people on the right remain convinced that Barack Obama is leading us there.

For a long time, especially in the ‘80s and ‘90s, it was customary for intellectuals who addressed the differences and similarities between Orwell and Huxley to assert that “1984” had not come true and that Huxley had come closer to predicting, as Christopher Hitchens put, it the “painless, amusement-sodden, and stress-free consensus” and “blissed-out and vacant servitude” of the postmodern age. I think the best of these comes from Neil Postman’s withering assessment in the foreword to “Amusing Ourselves to Death,” a landmark work of cultural criticism published in 1985:

That’s wonderfully vivid writing, but almost three decades later the question doesn’t look quite so clear-cut. What I see in the paradoxical America of 2013 still looks like Huxley on the surface, with Orwell making a strong comeback underneath. Banning books has largely proven both impractical and unnecessary, as Postman says (which is not to say it doesn’t happen here and there). But as we have seen more than once recently, the government’s security forces and even more sinister pals in the private sector guard their secrets fervently, and react with fury when some of them are exposed. The truth can be kept from us and also drowned in irrelevance, and what Postman calls a trivial culture (Postman’s argument, here and elsewhere, has more than a whiff of anti-pop snobbery) can also be a captive culture.

In many respects American culture, seen from the inside, is more diverse, tolerant and interesting than ever before. Yet the American nation-state seems to be in terminal decline. It is politically ungovernable, bitterly divided by class, caste, region and ideology. The executive branch and the “military-industrial complex” have expanded exponentially since Eisenhower’s day, accumulating more and more power where it can’t be seen. Read carefully through the recent news about the NSA revelations and you can see a few tendrils of this stuff: We know more than we did two weeks ago, but there are still entire government agencies whose names and missions are unknown, and programs so secret that Congress votes to fund them without knowing what they do. On the international stage, America plays a grotesque supervillain role, blundering from nation to nation like Robocop in an endless war that has yielded only hatred and mockery. Radical Islam has always been our enemy, except when our enemy has always been Communism.

In 1946, two years before writing “1984,” Orwell wrote an essay about the new form of social organization he saw on the horizon. He predicted it would do away with private property, which didn’t happen – but if we suppose that his idea of private property meant individual autonomy and freedom from debt slavery, this starts to sound more familiar:

These people will eliminate the old capitalist class, crush the working class, and so organize society that all power and economic privilege remain in their own hands. Private property rights will be abolished, but common ownership will not be established. The new “managerial” societies will not consist of a patchwork of small, independent states, but of great super-states grouped round the main industrial centres in Europe, Asia, and America. These super-states will fight among themselves for possession of the remaining uncaptured portions of the earth, but will probably be unable to conquer one another completely. Internally, each society will be hierarchical, with an aristocracy of talent at the top and a mass of semi-slaves at the bottom.

That vision of the future, so much more sober than what we’re used to calling “Orwellian,” sounds eerily like the world we actually live in (with a few doses of Ayn Rand thrown in). So far as we know, our Huxley-Orwell hybrid society emerged organically from the end of the Cold War, rather than resulting from an apocalypse or a grand plan. It’s almost a case of life imitating art, as if Earth’s rulers had selected the most effective elements from various dystopian visions and strategically blended them. But I'm not sure we can blame all this on a secret meeting of the Bilderberg Group, or some Lee Atwater ad campaign. As in “The Matrix,” we chose the simulacrum of democracy and bumper stickers about “freedom” instead of the real things. We chose to believe that our political leaders stood for something besides rival castes within the ruling elite, chose to believe that a regime of torture and secrecy and endless global warfare was a rational response to the tragedy of 9/11. We still believe those things, but our dystopia is still messy, still incoherent, still incomplete. Which means, in theory, that it can still be undone.