Does the government actually understand the 4th Amendment?

NSA argues that it has "probable cause" to surveil us at all times -- meaning we're all terrorist suspects. What? 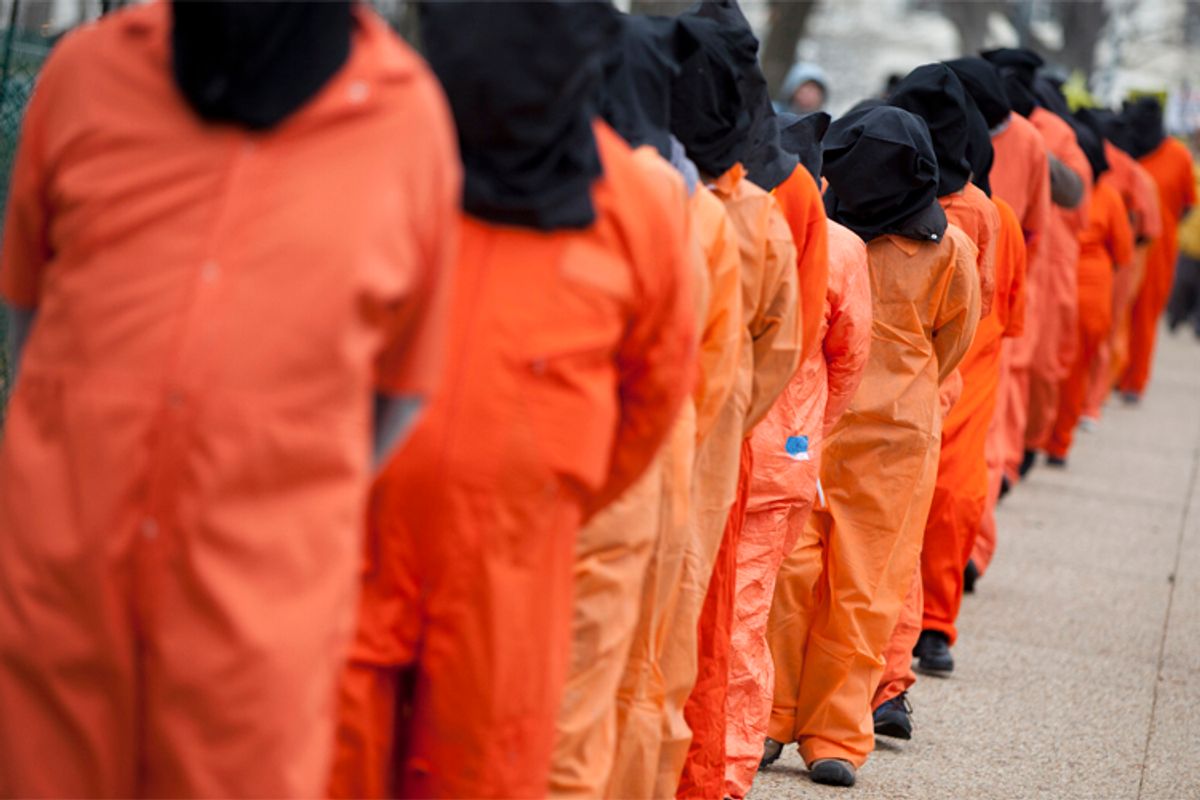 Let's say for argument's sake that you for some reason do not believe an executive branch official blatantly perjuring himself before Congress is a serious crime, even though that same executive branch aggressively prosecutes allegations of perjury in similarly high profile cases.

Let's also say that you simply accept at face value the Government's unverified assertion that it has halted "systemic" illegal/unconstitutional surveillance by the National Security Administration. And let's say that you still believe such an assertion even though a few years after it was aired 1) the Director of National Intelligence admitted illegal surveillance was still taking place and 2) Mother Jones reports that an 86-page court ruling "determined that the government had violated the spirit of federal surveillance laws and engaged in unconstitutional spying."

Let's for a moment set aside all those questions about the strong probability of criminal lawbreaking that were so powerfully raised first by the Guardian's NSA series, then by the Washington Post, by Bloomberg News and then by the Associated Press. Let's instead get to the heart of the huge constitutional principle at hand - the matter of probable cause.

To review: When the NSA goes to the FISA court to get the kind of warrant for metadata it obtained in the recently disclosed Verizon case, the agency is implicitly acknowledging that such surveillance requires judicial oversight. In such an acknowledgement, the NSA is admitting that even with an outdated 1979 Supreme Court ruling, it knows it cannot just mass collect metadata with no warrants whatsoever.

Thus, when the NSA is successful in getting such a warrant from the FISA court, both the agency and the court are implicitly asserting that such a warrant meets the constitution's Fourth Amendment requirement that warrants are only issued when there is "probable cause."

That requirement, of course, is not vague. Unlike many other amendments that deliberately left wiggle room for ongoing interpretation, the Constitution's Fourth Amendment is inarguably set in stone in declaring that in the United States "no warrants shall issue but upon probable cause." The inflexibility of that language was no accident - colonists' backlash to the British monarchy's use of general no-cause warrants was one of the main factors sparking the American Revolution. Consequently, as the Electronic Frontier Foundation shows, the founders sculpted the constitution to explicitly outlaw those boundless, no-cause general warrants.

Such general warrants, of course, are precisely the kind of warrants Edward Snowden's disclosures showed the FISA court is giving to the NSA. Indeed, as the original Guardian report showed, that court gave the NSA a warrant to obtain the phone records not only of specific individuals the agency had genuine reason to believe are engaging in terrorist activities. On the contrary - the court gave the NSA a warrant to obtain "on an ongoing daily basis...all call detail records or 'telephony metadata' created by Verizon for communications between the United States and abroad (and) wholly within the United States, including local telephone calls."

In a congressional floor speech late last week, Democratic U.S. Rep. Alan Grayson (FL), a lawyer, explained the conflict between this kind of general warrant and the Fourth Amendment's probable cause requirement, and highlighted the inherent contradictions of the government's limited public arguments (emphasis added):

This really is the essence of the matter. Because if you ask the NSA for justification, they’ll say: Well, it’s legal. What do you mean it’s legal?

Grayson is basically arguing that the kind of boundless general warrant the NSA is using to justify its mass "ongoing" surveillance cannot possibly comply with the Fourth Amendment's mandate that warrants only be issued when the government has probable cause.

In our current understanding of "probable cause" - whereby it applies only to warrants against specific individuals suspected of criminal activity - the Florida congressman is undoubtedly right (as is the ACLU, which has filed a federal lawsuit in the aftermath of the Snowden disclosures). However, that current understanding is really what's at issue here. That's because in claiming the FISA court's mass-surveillance warrants comply with the Fourth Amendment, the NSA, the Obama administration and Obama partisans are by definition arguing that the NSA has a legitimate "ongoing" probable cause to conduct mass surveillance. That is, they are effectively claiming the government has a legitimate "ongoing" probable cause not to believe specific individuals may be engaging in terrorist activity, but instead to believe all of us may be engaging in such activity.

Put another way, NSA defenders' argument that the FISA court's mass-surveillance warrants comply with the Fourth Amendment boils down to this: no matter who we are or what we do, the government has probable cause to automatically consider all of us suspects all the time.

Is such a perpetual population-wide presumption of criminality legitimate? Does the executive branch really have "ongoing" probable cause to view the entire citizenry as potential criminals worthy of judiciary-sanctioned surveillance? These are some of the huge questions that the Supreme Court has used technicalities to try to avoid.

Similarly, they are questions that Obama officials don't want to have to answer, likely because they (in part) don't want to have to argue in public that yes, they believe all Americans should be considered suspects and that therefore the government has probable cause for surveillance. They don't want to publicly make such an argument because they know it would almost certainly be politically unpopular. This may be one of the reasons the administration has fought to keep its legal rationale for such surveillance secret.

Clearly, though, despite both the reluctance of the Supreme Court and the political fears of the Obama administration, all of this needs to be debated and adjudicated in the open - and not in mealy-mouthed talking points but in explicit terms. After all, this is what is actually being discussed in coded language when surveillance proponents flippantly claim that the NSA's mass surveillance is constitutional. Underneath deceptively reassuring newspeak, they are forwarding the grotesque idea that the government has a legitimate probable cause to presume that we are all suspects.

Now, finally, it's time for that newspeak to end and for America to decide if that's the kind of government and legal presumption we really want.