Bank of America whistle-blower's bombshell: "We were told to lie" 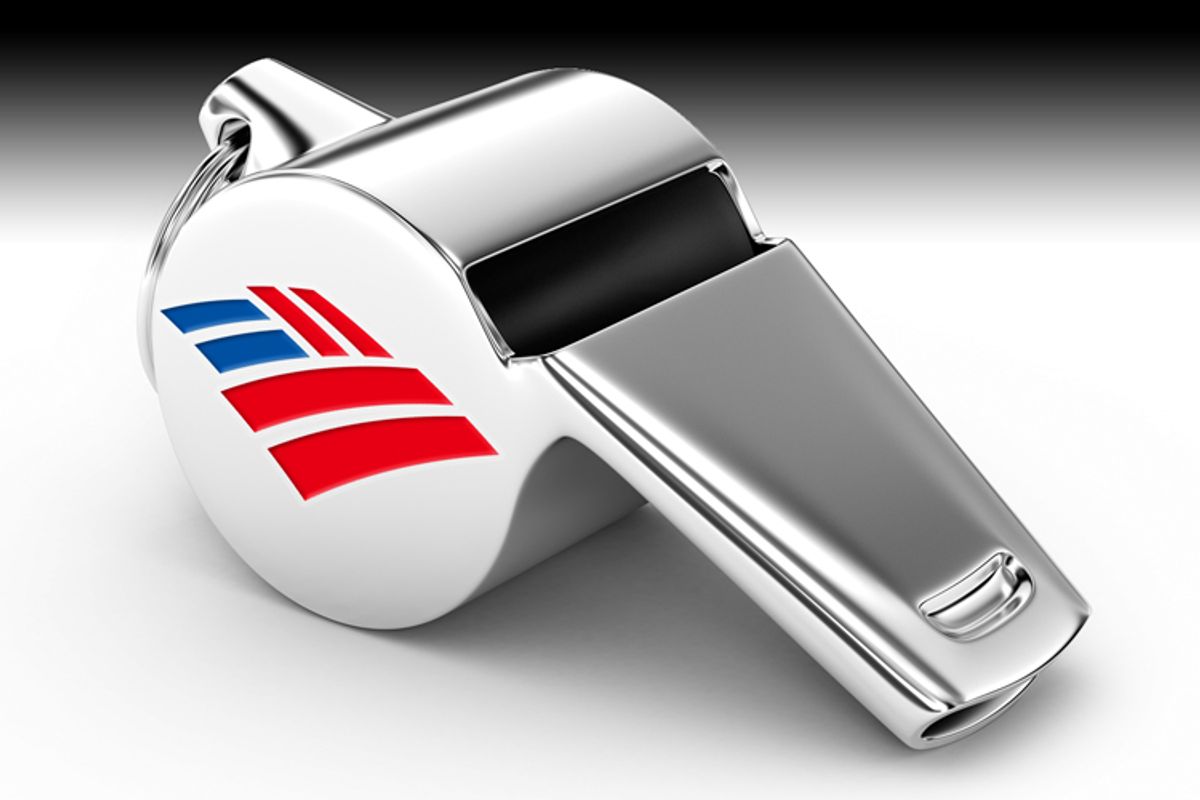 Bank of America’s mortgage servicing unit systematically lied to homeowners, fraudulently denied loan modifications, and paid their staff bonuses for deliberately pushing people into foreclosure: Yes, these allegations were suspected by any homeowner who ever had to deal with the bank to try to get a loan modification – but now they come from six former employees and one contractor, whose sworn statements were added last week to a civil lawsuit filed in federal court in Massachusetts.

“Bank of America’s practice is to string homeowners along with no apparent intention of providing the permanent loan modifications it promises,” said Erika Brown, one of the former employees. The damning evidence would spur a series of criminal investigations of BofA executives, if we still had a rule of law in this country for Wall Street banks.

The government’s Home Affordable Modification Program (HAMP), which gave banks cash incentives to modify loans under certain standards, was supposed to streamline the process and help up to 4 million struggling homeowners (to date, active permanent modifications number about 870,000). In reality, Bank of America used it as a tool, say these former employees, to squeeze as much money as possible out of struggling borrowers before eventually foreclosing on them. Borrowers were supposed to make three trial payments before the loan modification became permanent; in actuality, many borrowers would make payments for a year or more, only to find themselves rejected for a permanent modification, and then owing the difference between the trial modification and their original payment. Former Treasury Secretary Timothy Geithner famously described HAMP as a means to “foam the runway” for the banks, spreading out foreclosures so banks could more readily absorb them.

These Bank of America employees offer the first glimpse into how they pulled it off. Employees, many of whom allege they were given no basic training on how to even use HAMP, were instructed to tell borrowers that documents were incomplete or missing when they were not, or that the file was "under review" when it hadn’t been accessed in months. Former loan-level representative Simone Gordon says flat-out in her affidavit that “we were told to lie to customers” about the receipt of documents and trial payments. She added that the bank would hold financial documents borrowers submitted for review for at least 30 days. “Once thirty days passed, Bank of America would consider many of these documents to be ‘stale’ and the homeowner would have to re-apply for a modification,” Gordon writes. Theresa Terrelonge, another ex-employee, said that the company would consistently tell homeowners to resubmit information, restarting the clock on the HAMP process.

Worse than this, Bank of America would simply throw out documents on a consistent basis. Former case management supervisor William Wilson alleged that, during bimonthly sessions called the “blitz,” case managers and underwriters would simply deny any file with financial documents that were more than 60 days old. “During a blitz, a single team would decline between 600 and 1,500 modification files at a time,” Wilson wrote. “I personally reviewed hundreds of files in which the computer systems showed that the homeowner had fulfilled a Trial Period Plan and was entitled to a permanent loan modification, but was nevertheless declined for a permanent modification during a blitz.” Employees were then instructed to make up a reason for the denial to submit to the Treasury Department, which monitored the program. Others say that bank employees falsified records in the computer system and removed documents from homeowner files to make it look like the borrower did not qualify for a permanent modification.

Senior managers provided carrots and sticks for employees to lie to customers and push them into foreclosure. Simone Gordon described meetings where managers created quotas for lower-level employees, and a bonus system for reaching those quotas. Employees “who placed ten or more accounts into foreclosure in a given month received a $500 bonus,” Gordon wrote. “Bank of America also gave employees gift cards to retail stores like Target or Bed Bath and Beyond as rewards for placing accounts into foreclosure.” Employees were closely monitored, and those who didn’t meet quotas, or who dared to give borrowers accurate information, were fired, as was anyone who “questioned the ethics … of declining loan modifications for false and fraudulent reasons,” according to William Wilson.

Bank of America characterized the affidavits as “rife with factual inaccuracies.” But they match complaints from borrowers having to resubmit documents multiple times, and getting denied for permanent modifications despite making all trial payments. And these statements come from all over the country from ex-employees without a relationship to one another. It did not result from one “rogue” bank branch.

Simply put, Bank of America didn’t want to hire enough staff to handle the crush of loan modification requests, and used these delaying tactics as a shortcut. They also pushed people into foreclosure to collect additional fees from them. And after rejecting borrowers for HAMP modifications, they would offer an in-house modification with a higher interest rate. This was all about profit maximization. “We were regularly drilled that it was our job to maximize fees for the Bank by fostering and extending delay of the HAMP modification process by any means we could,” wrote Simone Gordon in her affidavit.

It is a testament to the corruption of the federal regulatory and law enforcement apparatus that we’re only hearing evidence from inside Bank of America now, in a civil class-action lawsuit from wronged homeowners, when the behavior was so rampant for years. For example, the Treasury Department, charged with specific oversight for HAMP, didn’t sanction a single bank for failing to follow program guidelines for three years, and certainly did not uncover any of this criminal conduct. Steven Cupples, a former underwriter at Bank of America, explained in his statement how the bank falsified records to Treasury to make it look like they granted more modifications. But Treasury never investigated. Meanwhile, the Justice Department joined with state Attorneys General and other federal regulators to essentially bless this conduct in a series of weak settlements that incorporated other bank crimes as well, like “robo-signing” and submitting false documents to courts.

These affidavits, however, should return law enforcement to the case. William Wilson, the case management supervisor, alleges in his statement that this “ridiculous and immoral” conduct continued through August of 2012, when he was eventually fired for speaking up. That means Bank of America persisted with these activities for at least six months AFTER the main, $25 billion settlement to which they were a party. So state and federal regulators could sue Bank of America over this new criminal conduct, which post-dates the actions for which they released liability under the main settlement. Attorneys general in New York and Florida have accused Bank of America of violating the terms of the settlement, but they could simply open new cases about these new deceptive practices.

They would have no shortage of evidence, in addition to the sworn affidavits. According to Theresa Terrelonge, most loan-level representatives conducted their business through email; in fact, various email communications have already been submitted under seal in the Massachusetts civil case. State Attorneys General or US Attorneys would have subpoena power to gather many more emails.

And they would have very specific targets: the ex-employees listed specific executives by name who authorized and directed the fraudulent process. “The delay and rejection programs were methodically carried out under the overall direction of Patrick Kerry, a Vice President who oversaw the entire eastern region’s loan modification process,” wrote William Wilson. Other executives mentioned by name include John Berens, Patricia Feltch and Rebecca Mairone (now at JPMorgan Chase, and already named in a separate financial fraud case). These are senior executives who, if this alleged conduct is true, should face criminal liability.

Bank accountability activists have already seized on the revelations. “This is not surprising, but absolutely sickening,” said Peggy Mears, organizer for the Home Defenders League. “Maybe finally our courts and elected officials will stand with communities over Wall Street and prosecute, and then lock up, these criminals.”

Sadly, it’s hard to raise hopes of that happening. Past experience shows that our top regulatory and law enforcement officials are primarily interested in covering for Wall Street’s crimes. These well-sourced allegations amount to an accusation of Bank of America stealing thousands of homes, and lying to the government about it. Homeowners who did everything asked of them were nevertheless pushed into foreclosure, all to fortify profits on Wall Street. There’s a clear path to punish Bank of America for this conduct. If it doesn’t result in prosecutions, it will once again confirm the sorry excuse for justice we have in America.