Some think he's a CIA plant, others say he's a useful idiot. But they all agree: Something stinks to high heaven! 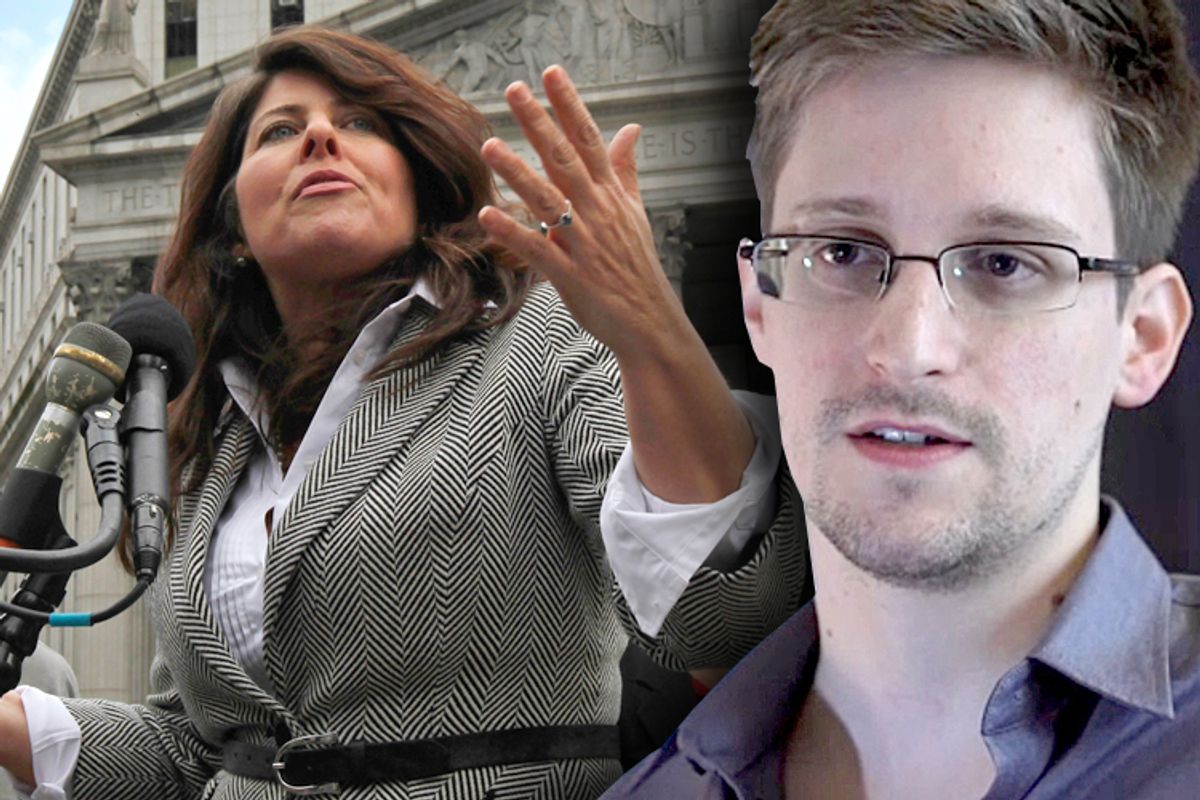 Every time there's a shooting at an elementary school or a bombing at a marathon, people harboring an obsession with -- or financial interest in -- conspiracy theories will jump on inconsistencies to tear down the "official narrative" and replace it with their own, no matter how far-fetched. So perhaps it was only a matter of time before the conspiracists set their eternally skeptical eyes on another target. Meet the Edward Snowden truthers.

What's surprising about the Snowden theories is that one might think he'd be a sympathetic figure to people deeply skeptical of government power. But instead of holding him up as hero (or even a traitor), some are intent on labeling him a co-conspirator.

Perhaps the most prominent Snowden truther is Naomi Wolf, whom Al Gore reportedly paid $15,000 a month to advise his presidential campaign. People were a little surprised Friday when the prominent feminist author and activist posted a lengthy essay on her Facebook page wondering if Snowden may actually be a plant from "the Police State."

Wolf wrote that she has a "creeping concern" that Snowden "is not who he purports to be," mostly because Wolf expects leakers to be disheveled, inarticulate and litigious (apparently based on her experience with Jullian Assange), and Snowden is none of these things. "To me this reads as someone who has learned his talking points," she wrote. And his girlfriend "happens to pole-dance?" -- very suspicious! "It is actually in the Police State’s interest to let everyone know that everything you write or say everywhere is being surveilled," she wrote. Ergo: Snowden is likely a government stooge.

The missive was rightly mocked online, and predicated on a number of factual misunderstandings. Still, Wolf is hardly alone. On the fever swamps of the Internet's conspiracy sites, plenty of posts dissect Snowden's biography and find gaps that can only be filled by CIA dirty tricks, apparently.

Webster Tarpley, a Lyndon LaRouche ally who hosts an antiwar radio show that often dips into 9/11 trutherism, proposed this theory Friday: "The most likely hypothesis for Snowden is that he's a triple agent." Here's how that would work: On the first level, Snowden works for the NSA (via Booz Allen), and on the second level, he's a whistle-blower. As for the third level: "Then at bottom, where is his bread really buttered? CIA. At the bottom, he's a CIA agent all along," Tarpley said on his radio program. The CIA's purpose with Snowden is both to weaken Obama and push the president to intervene in Syria, which, conveniently, the White House announced it would do Friday. See?

But writing at Alex Jones' InfoWars.com, investigative journalist Jon Rappoport sees Snowden as a pawn in a clandestine bureaucratic struggle between the CIA and the NSA:

Here is a more likely scenario. Snowden never saw any of those thousands of documents on an NSA computer. Never happened. Instead, he was either used or volunteered as a CIA operative to carry the endless turf war between CIA and NSA a new step forward. [...]

This is the more plausible scenario to Rappoport because he just doesn't believe Snowden's biography, as he wrote in more detail at Activist Post. For instance, how did he sign up for special forces training if he never completed high school? "These are red flags. They raise questions. Serious ones," he wrote.

A widely shared blog post from Scott Creighton, meanwhile, calls Snowden a "manufactured hero" and expands the conspiracy to include journalists Glenn Greenwald and Laura Poitras, who broke the story. "Poitras has a long history of making films that expose various horrific aspects of our new Global War Of Terror ... to a point," he writes, arguing that Poitras has been "bought off" by a MacArthur genius grant to conduct faux-adversarial journalism. Creighton has higher hopes for Greenwald, and thinks the government may be using Snowden to take him down, but at the same time fears that Greenwald  has become "just another tool" for the powers that be.

Further out on the paranoid spectrum one gets to people who think Snowden may be the hacker "Guccifer," who leaked pictures of George W. Bush's paintings, while others seem to think Snowden's girlfriend may have actually been "[S]nowden in drag due to the same placement of a mole and similar lips."

And then, of course, the UFOlogists. Conspiracy site Before its News and a poster on the Examiner website see "a secret UFO message hidden in NSA whistleblower Edward Snowden’s recent interview." You see, when played backward, it sounds like Snowden is saying "those UFOs" at one point.

Why would these people find it easier to believe Snowden is an CIA plant than a whistle-blower? Conspiracists are reflexively skeptical of the "official narrative," even when it should confirm their worldview. Snowden should be a victory for them, but because the mainstream media and the government are corroborating much of what Snowden leaked, the mainstream account immediately becomes suspicious.

And Snowden's biography does legitimately have some major question marks (e.g., he said he was paid $200,000, but Booz Allen said it was $120,000). These can be explained away (Snowden said $200,000 was his career-high salary) or are products of a guy who seems prone to some exaggeration. But to conspiracists, they're proof of funny business.

And for some, it may have to do with lingering bitterness toward Greenwald for failing to back them up in the 9/11 truth movement. Tarpley especially seems to feel betrayed by someone whom he viewed as a fellow traveler, calling Greenwald "an enemy of 9/11 truth" who "struck out ... when confronted with a chance to fight." So trashing the biggest scoop of Greenwald's career, and suggesting that the journalist himself may have joined the Dark Side, could be a bit of score settling from truthers who are still stinging from his rejection.