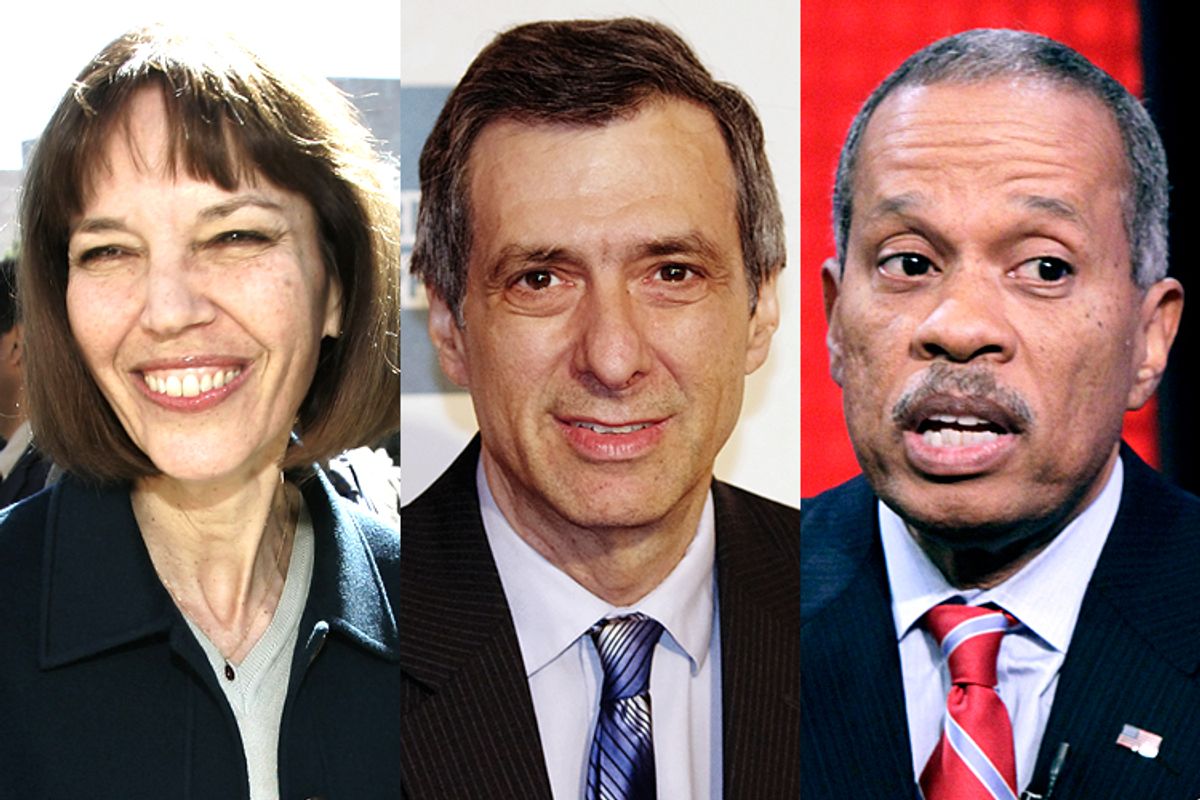 With Howard Kurtz joining Fox News, announced today, the conservative network is quickly becoming the home of disgraced journalists who were exiled from the mainstream. No matter their ethical lapses or questionable practices, Fox is apparently happy to take them -- as long as their competitors are not.

Kurtz, who was fired by the Daily Beast and let go by CNN after a string of controversies and errors last month, joins Juan Williams, who was fired by NPR and caught in a research assistant plagiarism scandal, and Judith Miller, who was pushed out of the New York Times after carrying water for the Bush White House.

All three journalists followed a similar arc. They each had talent and promise, which led to meteoric success, which led to hubris that turned into laziness (Williams), complacency (Kurtz), and co-option (Miller). That was followed by flame out, disgrace, and finally refuge in the bosom of Roger Ailes.

The script is so predictable that we in fact predicted Kurtz would follow it, back on May 3 when we noticed that conservative critics of the lamestream media were rallying behind the former Daily Beast Washington bureau chief and CNN host. "Maybe Fox News is hiring," we wrote. "Kurtz could ask Juan Williams for a referral."

The nominal reasons for Kurtz' departure from The Beast -- spending too much time on a vanity side project and a hopeless failure at reading comprehension -- seemed to actually be more like final straws than unpardonable offenses. Forbes' Jeff Bercovici reported that editor Tina Brown "had been looking for a way to get rid of him for months," and even had lawyers compile a list Kurtz's biggest screwups, of which there were many, from inventing Nancy Pelosi quotes to attributing quotes to Darrell Issa that were actually from his press secretary.

But none of this mattered to Fox and many other conservatives, whose hatred for "liberal media" is so reflexive and unflinching that anyone ostracized by the mainstream -- even with good cause -- seems to automatically become a hero for right. It's the "enemy of my enemy" principle. "My guess is that, in terms of sheer word output over decades, Howie Kurtz has made far fewer errors than almost anyone else in journalism," John Podhoretz tweeted.

Likewise, Williams was ousted from NPR for comments about Muslims on airplanes, but it came after his once golden career hit trouble when he wasn't willing to put in the time or effort to do his job well. Similar questions were raised after we noticed that he had lifted lengthy portions of a think tank report, without attribution, for a newspaper column that turned out to be largely the work of a research assistant.

After NPR, Williams similarly took refuge in the conservative anti-media complex, portraying himself as a victim of tyrannical liberal political correctness. Eventually, Ailes brought him on full time and rewarded him with an enormous raise.

Miller, once a genuine superstar, may have pioneered this path, however. After her faulty reporting helped convince the American public that Saddam Hussein had weapons of mass destruction -- "[M]y job isn't to assess the government's information and be an independent intelligence analyst myself. My job is to tell readers of the New York Times what the government thought about Iraq's arsenal," she said -- after the Valerie Plame incident, and after she left the Times, she too sought shelter in the right.

Alex Pareene wrote back in 2010: "She ensconced herself in a right-wing think tank, and occasionally appeared on Fox. When no one else would have her, because she’s a bad journalist (and, reportedly, a rude and unpleasant person), the right-wing media welcomed her." In 2008, Ailes gave her a job.

Fox is well known as a home for failed and disgraced politicians, from Allen West and Sarah Palin to Oliver North (of Iran-Contra fame), so perhaps its a natural progression to take exiles from the mainstream media as well. Ironically, Fox is perpetually the establishment's problem in "failing upwards," in that it will hire someone, no matter how little they deserve it, largely because they've already reached a certain level of success.

But it's especially ironic for Kurtz, who was not just a reporter but a media critic, to end up first on the wrong end of a media scandal, and then at place most in need of criticism.