"The Attack": I married a suicide bomber 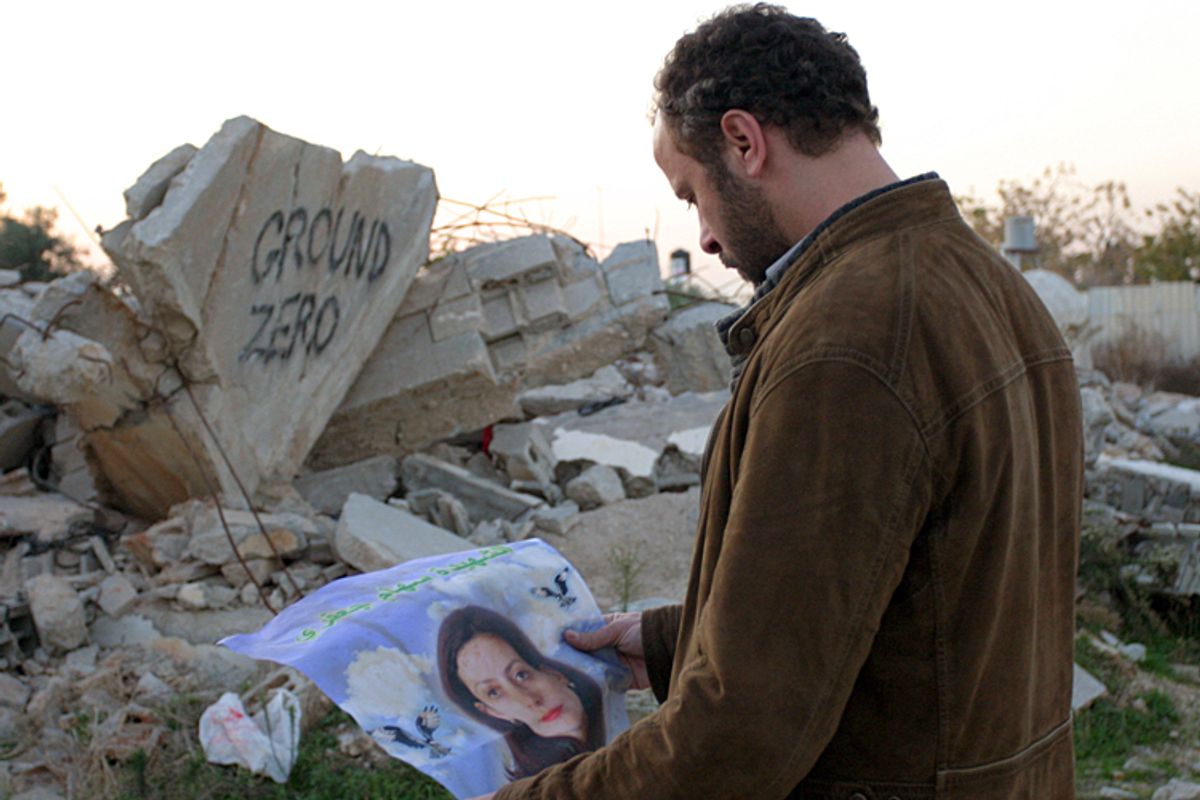 At the beginning of “The Attack,” a film by Lebanese-American director Ziad Doueiri that’s adapted from a bestselling novel by Algerian writer Yasmina Khadra, Dr. Amin Jaafari seems to have it all. More than that, Amin seems to embody the possibilities of a new Middle East. He’s both an Arab and an Israeli, a secular Muslim from the Occupied Territories who is now a full-fledged Israeli citizen and a respected surgeon at an elite Tel Aviv hospital. (Indeed, the actor who plays him, 36-year-old Ali Suliman, has a similar biography: Born in Nazareth and educated at a leading acting school in Tel Aviv, he has worked in Britain, Hollywood and Israel.)

But that vision of a Middle East beyond bigotry and warfare is in many ways an illusion. That’s the vital and essential delicacy of “The Attack”: Doueiri, himself a child of the Lebanese civil war who grew up to become a cameraman for Quentin Tarantino and now a filmmaker in his own right, believes in the possibility suggested by people like Amin, but also understands its difficulties and pitfalls all too well. He violated both Lebanese law and long-standing Arab custom by making a film in Israel, one that acknowledges that Israelis are human beings rather than monsters, and now the only way his own people will see his film is by way of pirated DVDs and YouTube clips.

When Amin receives a prestigious medical award from his hospital – the first time it has ever been given to an Arab – he gives a warm speech reminding his audience that Jews and Arabs are closely connected by genealogy, geography and history. But just before the ceremony, Amin gets an unexpected phone call from his wife, Sihan (Reymonde Amsellem), who as we learn later has declined to accompany him, explaining that she had promised to visit her grandfather in Bethlehem. It’s the last time he will ever speak to her. Sihan never went to Bethlehem, and the next day she will blow herself up in a Tel Aviv restaurant, killing 17 people, many of them children attending a birthday party.

You can’t call “The Attack” a whodunit or a thriller, because we know the who, and the why remains shrouded in mystery. Its resemblance to an episode of “Homeland” – or to “Prisoners of War,” the Israeli series on which “Homeland” is based – is strictly superficial. Amin is understandably reluctant to believe that Sihan could have committed such a brutal act, and the Israeli authorities (also understandably) initially view Amin as a suspected accomplice. But after subjecting him to harsh interrogation for a few days, a garrulous, bald-headed Shin Bet officer (Israeli character actor Uri Gavriel) gets bored with Amin and lets him go, leaving him to face a harsh new reality. He will never again be a trusted member of Israeli society, even though he has committed no crime, and worse yet, the woman he shared his life with for many years turns out to be someone he didn’t know.

Much of “The Attack,” then, is less about politics or violence than about a man wrestling with the sudden and traumatic loss of his own identity. When Amin travels to Nablus, on the West Bank, to meet a rabble-rousing anti-Israeli sheik who may or may not have inspired Sihan’s attack, he’s also traveling into his own family background, in search of a personal connection that can make sense of what has happened. His predicament is that of the exile, the man who thinks he has two homes and turns out to have none. Even the Israeli friends who stick by him, including his hospital colleague Kim (Evgenia Dodena), who may have more in mind than friendship, want him to prove his loyalty, while Palestinians view him as a turncoat, a stooge or even a Shin Bet asset. And the face of Sihan, a venerated martyr to jihad, taunts him from posters plastered all over Nablus.

Sometimes the screenplay for “The Attack” (written by Doueiri and his partner, Joëlle Touma) hits the emotions a little too squarely on the nose, but this doleful and nuanced Middle Eastern tragedy is unlike any other recent film from the region in various ways. Doueiri has said that leaders of Hezbollah, Lebanon’s de facto governing power, privately promised not to interfere with his film – but that was before he made it. In depicting Israel as a complicated and conflicted modern society rather than a demonic, monolithic imperialist power, Doueiri should have known he was entering a no-go zone for Arab cinema (which either ignores the existence of Israel altogether or indulges in the worst kind of anti-Jewish stereotypes).

It isn’t even ironic that “The Attack” won the best-film award at the Marrakech International Film Festival, the Arab world’s leading showcase, and has now been banned in Lebanon and all other nations of the Arab League. That’s exactly how these things work. Producers from Egypt and Qatar have even removed their credits from the film, so that it now appears to be a European-Israeli co-production. But all these marks of disapproval, as Doueiri surely knows, will only heighten the appeal of “The Attack” to younger Arabs hungry to break free of ideological certainty and listen to new alternatives. In its own way, “The Attack” is a crucial step forward: It’s time for the artists of the Middle East to engage in real dialogue, since the politicians can’t or won’t.

“The Attack” opens this week at the Angelika Film Center and the Beekman Theatre in New York and the E Street Cinema in Washington, with wider national release to begin June 28.