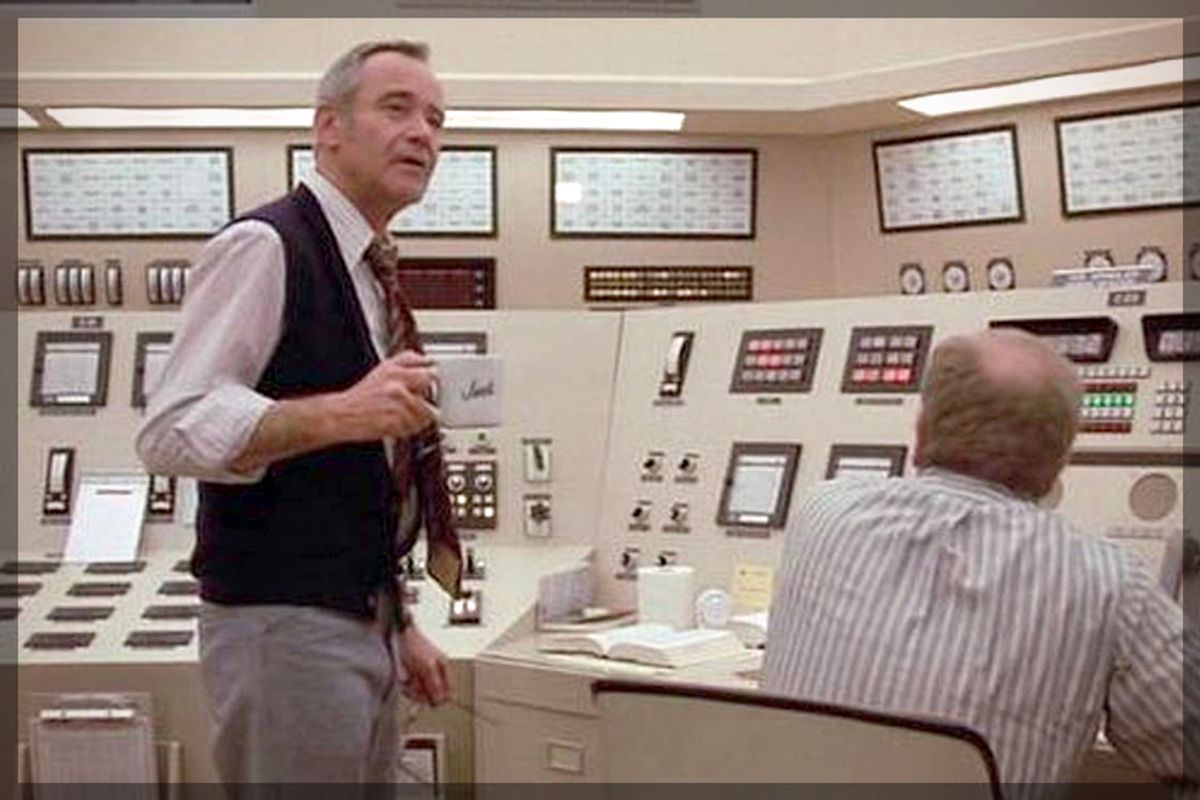 A scene from "China Syndrome"
--

Faced with the near-term catastrophe of climate change and the planet-poisoning effects of fossil fuels, is the environmental movement changing its tune on nuclear energy? It’s not a new question, and let’s be clear that the short answer is still no – or mostly no. You can’t find one major environmental organization, from activist groups like Greenpeace to mainstream conservation groups like the Nature Conservancy or the National Audubon Society, that has come out publicly in favor of nuclear power.

But there is also a longer and more complicated answer to the question, which is that many people who have long been skeptical about the safety, economic feasibility and ultimate morality of nuclear power are now somewhat willing to consider the argument that, at least in the medium term, we can’t do without it. This is partly also an argument about whether you think the continued development of human society can be separated from the health of the planet as a whole, and about whether people in the developing world have an inherent right to enjoy the energy-guzzling standard of living most of us in the global North take for granted.

Perhaps the pithiest form of this argument was made by climate-change activist and author Mark Lynas in an explosive Op-Ed for the Guardian last September: “Without nuclear, the battle against global warming is as good as lost.” Building lots and lots of new nuclear reactors, Lynas and others have argued, offers us our last and best hope to generate enough low-cost, low-carbon energy to tackle the immediate climate crisis without devastating damage to the planetary ecosystem, human society or both.

Lynas, one of the key figures in Robert Stone’s controversial new pro-nuke documentary “Pandora’s Promise,” has become something of a radioactive personality (sorry!) within the environmental community. He now defines himself as a “pro-science environmentalist” -- clearly implying that other environmentalists are against science – and has also renounced his long-standing opposition to genetically modified crops. But Lynas’ heretical positions, whatever you make of them, stem from genuine conviction. There’s no evidence that he’s operating in bad faith or taking bribes from the nuclear industry or whatever. Even the left-leaning journalist Mark Hertsgaard, a forceful opponent of nuclear power who has written two articles for the Nation seeking to debunk “Pandora’s Promise,” makes clear that he respects Lynas and believes he is sincere.

Very few prominent environmental activists – indeed, almost none -- have become staunch proponents of nuclear power to the degree Lynas has. But a great many people in the green world have begun talking about the issue, in public and in private, and in that sense Lynas is the tip of the iceberg. One of Hertsgaard’s responses to “Pandora’s Promise” comes in the form of a searching, moving and intelligent dialogue with author and activist Terry Tempest Williams, who was raised in Utah and believes her family’s extensive history of cancer resulted from living downwind from the Nevada Test Site, where nuclear weapons were detonated. Even given that personal background, and even in the context of a conversation that is generally critical of “Pandora’s Promise,” Williams admits that the film’s perspective challenged her thinking, after 30 years of anti-nuclear activism:

This crack in my own thinking is heightened by the fact that I am now watching my extended community of plants, animals, rocks, rivers and human beings be ravaged by the oil and gas industry, be it fracking or the razing of vulnerable wildlands. For me, this film’s strength was not that it changed my mind, which it did not, but that it expanded it. I am interested in having an open conversation about nuclear energy. We know we must wean ourselves off fossil fuels. So what are the alternatives? Are renewable energy sources enough for the energy-poor around the world?

My own perspective is similar: “Pandora’s Promise” often feels like a maddeningly one-sided and tendentious film -- Robert F. Kennedy Jr. has described it as "an elaborate hoax" -- and it did not succeed in quelling my doubts about nuclear power. Like so many leftists raised in the ‘60s, ‘70s and ‘80s, I was weaned on anti-nuke activism, schooled by “Silkwood” and “The China Syndrome,” and terrified by Three Mile Island and Chernobyl. But it also reminded me that every aspect of the scientific, social and environmental debate around nukes is complicated and clouded by ideology, and that the issues are exceptionally difficult for laypeople to parse. (How many people have died as a result of the Chernobyl disaster? It depends whom you ask: Somewhere between a few dozen and a few hundred thousand.)

It’s too easy to become entrenched in a mean-spirited cultural dispute between Gaia-worshiping tree-huggers and technophile science geeks who can barely speak the same language, and it behooves us all to come back to this issue, as Williams does, with fresh eyes and an open mind. So while I think Hertsgaard is right that “Pandora’s Promise” largely rehashes pro-nuclear talking points that have been around for 30 years or more, it’s also an important conversation-starter on a topic no concerned citizen of Earth can afford to ignore.

Stone paints compelling portraits of a number of prominent environmentalists who have switched sides on nuclear power: Along with Lynas, there is also Whole Earth Catalog founder and sustainability pioneer Stewart Brand, nuclear-age historian Richard Rhodes, author and journalist Gwyneth Cravens and “eco-pragmatist” policy wonk Michael Shellenberger. These are serious and intelligent folks, but there’s nothing especially surprising about their position; only Lynas would qualify as an activist whose work falls outside the political mainstream. Indeed, several of these people have long been associated with Shellenberger’s think tank, the Breakthrough Institute. (In the first published version of this story, I erroneously reported that Microsoft co-founder Paul Allen, who produced this film, had also funded Shellenberger's institute. That's apparently not true.)

But “Pandora’s Promise” goes much further than that, drawing an outrageous parallel between anti-nuclear activists and climate-change deniers, by painting both as anti-scientific or unscientific zealots. (Terry Tempest Williams resents this in particular: “My eyes have been opened by death, not fear, and I remain a respecter of science and a seeker of facts.”) It also gives exceedingly short shrift to all possible non-nuclear pathways to a sustainable energy future. Wind, solar and geothermal are “a hallucinatory illusion,” Shellenberger says, too marginal and unreliable to help us any time soon. (Hertsgaard argues that the pace of innovation in those fields renders this an outdated view.) Even the universally acceptable goal of energy efficiency, which mainstream management consultants have suggested could reduce American energy consumption by somewhere between 20 and 50 percent, is a chimera that will only lead to more energy being used in other places.

And while presenting most forms of non-carbon renewable energy as unrealistic pie in the sky, “Pandora’s Promise” argues in favor of an entirely new generation of breeder reactors based on the long-canceled Integral Fast Reactor, or IFR. Such Generation IV reactors might or might not be a good idea – in principle, they can reuse nuclear waste as fuel almost indefinitely – but they would require enormous up-front investment (likely $10 billion to $12 billion apiece), they remain largely theoretical and they do not currently exist or operate anywhere on the planet. As Hertsgaard and others have observed, the film never mentions the massively expensive Superphoenix plant in France, an infamous white elephant of similar design that operated normally for just 63 months of its 11 years online, or the even more ludicrous example of the Monju plant in Japan, a prototype fast-breeder reactor that has produced exactly one hour of electricity in 17 years and was the site of a major accident and coverup in 1995.

Indeed, one can concede many of the film’s central points, at least for the sake of argument, without concluding that nuclear power is a good idea. It’s useful to be reminded that nuclear plants are demonstrably less dangerous to human life or the environment than the coal-fired variety, whose pernicious effects kill people in the tens or hundreds of thousands every year. Outside the worst-case scenario that occurred at Chernobyl, the number of people who have died as a direct result of nuclear accidents, while unknown and unknowable, is smaller by many orders of magnitude. (Stone rather cruelly mocks veteran activist Helen Caldicott for alleging that Chernobyl caused a million deaths, but he’s correct that that’s an unsupportable claim.) The oft-repeated factoid that all the nuclear waste ever produced could be stacked a few meters deep on a football field is apparently accurate. But no one would want to live within 20 miles of that stadium – much of that waste must be isolated from contact with human beings or the organic environment for millennia to come.

I recommend watching "Pandora's Promise," but I also recommend reading the Hertsgaard-Williams exchange in the Nation, which sums up the fundamental issues, from an environmental perspective, even more clearly. Then move on to the comments section of that article, which features a fair amount of reasonable debate, some ad hominem invective, a few wild claims about cold fusion and perpetual-motion machines and one person explaining that “the Earth is just a rock, and one the human race must eventually abandon if we are to continue to survive as a species.” I’m not sure that’s exactly the kind of support that Lynas, Brand, Shellenberger and other pro-nuke environmentalists are looking for, but you could describe it as an extreme example of the philosophical conflict that Terry Tempest Williams sees beneath this issue.

Advocates for nuclear energy, whether they call themselves environmentalists or not, are urging us to place an enormous financial, cultural and political bet on untested technology that most progressives and environmentalists around the world have long seen as deadly and dangerous. Many of those advocates earnestly believe that we have no other realistic choice, and that the only available alternative is to scorch the planet to cinders by burning oil and coal at an ever-accelerating rate. I hope, and believe, that isn’t true. But I also think we are obligated to pursue what Williams calls an open conversation about “new strategies for nuclear energy,” aimed at answering this question: “What energy sources can we employ that do the least harm to life on earth and at the same time can meet the expanding needs of the human family?”

In posing that question seriously, we also must approach what Williams calls a philosophical “fracture line” within the green movement. On one side are those who believe in more technology and more development, including nuclear energy, as the human population continues to grow. She sums up the case this way: “The energy-poor deserve what we have in places like the United States and Europe. There is no turning back. We have no historical evidence of stopping the arrow of progress.”

I find that a persuasive moral argument, but so too is the one on the other side of the fracture line, which Williams describes as more restrained and “less human-centered … seeing ourselves as a species among a cacophony of other species, interdependent and interrelated, where what is called for is not new technology but a new planetary consciousness.” In that context, we may still have a moral responsibility to ensure that people in Brazil and India can have air conditioning – but we have to find a new way to provide it. Maybe nuclear is the future, maybe it can provide a bridge to the future, and maybe it’s a risky and dangerous technology with no future. But we have to face the nuclear dilemma honestly, and right now, while it’s still halfway possible that we might leave our grandchildren a decent place to live.