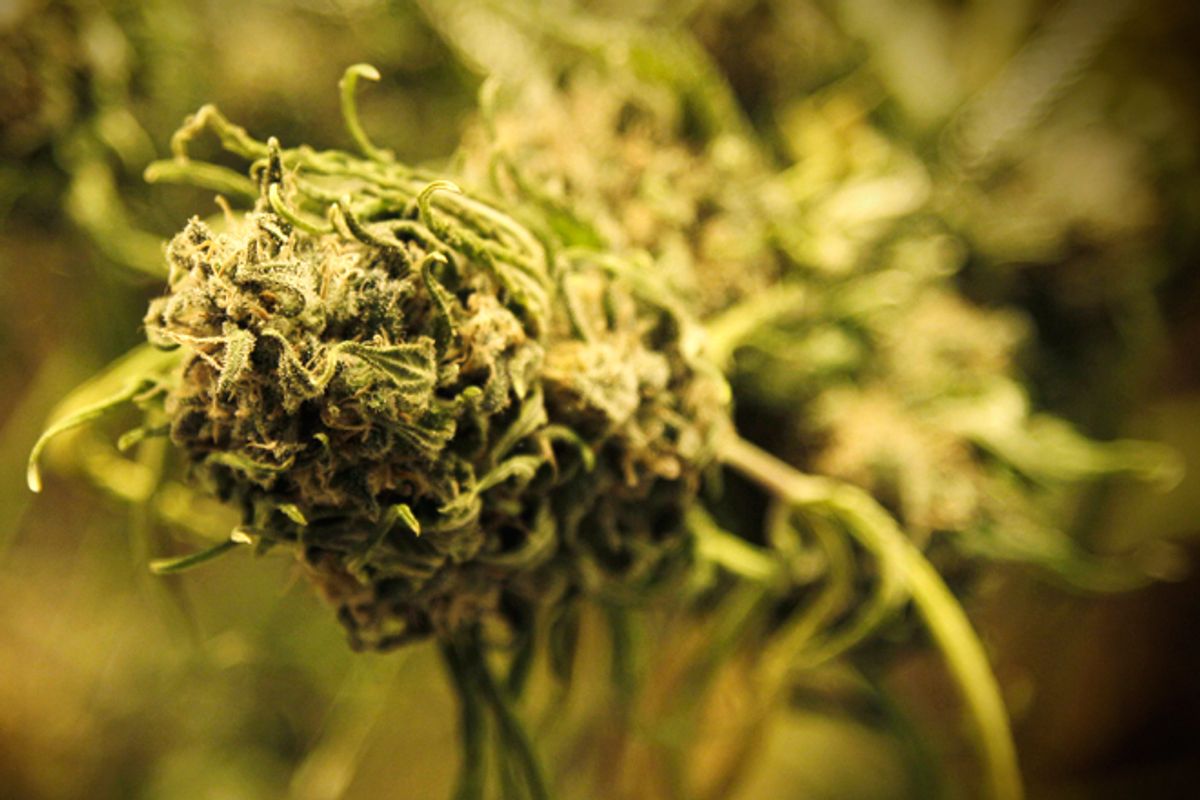 This piece originally appeared on Earth Island Journal. It has been corrected since it first published.

The story is what you could call, um, an evergreen: As folks have reported here, here and here, illegal marijuana farms on public lands in California often cause serious environmental damage. Tresspass growers, as they are called, have been known to clear cut forest groves, trash wild areas with irrigation equipment and human waste, and use large amounts of chemical pesticides. Now illegal pot growers are being blamed for another environmental impact – killing rare species like the Pacific fisher and the northern spotted owl through their indiscriminate use of rat poisons.

Marijuana growers who operate in remote areas have a serious pest problem. Rats and other rodents, it seems, like to eat cannabis plants, especially when they’re young and tender. Here’s how Terri Klemetson, the news director of Humboldt County’s KMUD radio, explains it: “When people grow weed, the baby plants are tasty and yummy for rats and they just try to eat them.” Growers who cultivate pot for the state’s legal medical marijuana dispensaries don’t have to worry about this as much, since their operations are usually secured behind fences. The illegal growers who operate in the backcountry, however, often have their plants out in the open. “In the wildlands and on public lands, the growers out there aren’t on private property, so there aren’t fences out there,” Klemetson says.

To protect their plants, the trespass growers rely on vast quantities of rodenticides. But the rats aren’t the only victims. Wildlife often ends up as collateral damage.  According to an organization called Wildcare, the rodenticides also kill or sicken a long list of birds and beasts. Wild rodents such as opossums, skunks, and raccoons often take the bait and die. Raptors or other carnivores that prey on mice and rats often die from eating animals that have consumed anti-coagulant rat poisons. That list includes grey foxes, barn owls, Cooper’s hawks, red tail and red shouldered hawks, and great horned owls.

“This is super lethal stuff,” says Lisa Owens Viani, co-director of an Earth Island Institute-sponsored project called Raptors Are the Solution that is trying to bring attention to the dangers of anti-coagulant rat poisons. “A little bit goes a long way.”

Wildlife biologists now fear that the use of rodenticide in remote areas is harming a rare species called the Pacific fisher. Despite its name, the fisher doesn’t live near the ocean. It inhabits low elevation, mixed conifer and hardwood forests – exactly the kind of landscape that pot growers also like. A weasel-like animal about the size of a housecat, the fishers prey on rabbits, squirrels, porcupines, and voles. Widespread trapping in the eighteenth and nineteenth century and continuing habitat loss due logging have kept the fisher population low. Because of the fishers’ elusive habitats, biologists aren’t exactly sure of the size of the population in California’s northwest coastal mountains; the population in the southern Sierra Nevada is estimated at a scant 300 animals. The Center for Biological Diversity has petitioned the federal government to include the Pacific fisher on the endangered species list.

A study published this spring by UC Davis researcher Mourad Gabriel and colleagues revealed that rodenticides pose a clear threat to the fishers. At least six fishers have died from rodenticides since 2009, according to necropsies that included toxicological screens. Even more worrisome were the results of blood tests conducted on fishers in the Sierra Nevada, US Forest Service lands on the Kings River, and the Hoopa Valley Reservation in Humboldt County. Toxicology tests of 58 fishers on those public lands found that nearly 80 percent had been exposed to second-generation anti-coagulant rodenticides – the type of rat poison found on the market today.

Biologists used to assume that the fishers were exposed to rodenticides in agricultural or peri-urban areas. Spatial analysis revealed that most of the poisonings were happening in timberlands far from human habitations. All of the documented mortalities occurred from late April to early June, the height of marijuana seedling planting and the period of highest rodenticide use. Gabriel and the other researchers wrote: “In many cases, law enforcement officers approaching [marijuana] grow sites observe wildlife exposed to what officers call ‘wildlife bombs’ due to their high potential for mass wildlife killing.”

Illegal pot growers’ use of rat poison also has been implicated in deaths of the northern spotted owl, an endangered species. One study of dead owls found that 50 percent tested positive for rat poison.

Upset about the wildlife deaths and concerned that negative publicity could impact their eco-image, some marijuana growers in Humboldt County have organized to halt the sale of rodenticides. The forested mountains of Humboldt, Mendocino and Trinity counties in far Northern California are known as the “Emerald Triangle” due to the large amounts of pot historically grown there. As you might imagine, it can be challenging to get pot growers – even those operating in the semi-legal economy of the medical marijuana industry – to speak on the record. But I was able to get in touch with several local journalists who are deeply embedded in the region’s pot grower community. In speaking with them it became clear that there is a large divide between the trespass growers bushwacking through the wilderness and the old school, back-to-the-land hippies.

“There are two distinct and non-overlapping groups of growers: the trespass growers and the private-land growers,” local documentary filmmaker Mikal Jakubal wrote to me in an email. “The majority of the poison is used by the trespass growers on public/tribal/corporate land, not by the private-ownership growers. Those of us in the back-to-the-land community here, growers or not, don’t know who those people are. We don’t hang out with them, party with them or have them as Facebook friends. They don’t come to our potluck dinners and we can’t say, ‘Hey dude, dumping buckets of rat poison, clearcutting public lands, diverting streams and dumping chemical fertilizer on public land sucks.’ They are not ‘us.’”

Klemetson, the local radio station manager, told me: “Every third person grows marijuana here. It’s a normal thing. But we also have an uncontrolled situation with growing in the wildlands. Just like in society at large, there are all sorts of people in the growing community.”

With the steady decriminalization of marijuana, pot has become (for some people, at least) a connoisseur item just like coffee or chocolate. Posh apothecaries in San Francisco and Seattle peddle boutique strains and, like wine, marijuana is now marketed by terroir – “the cult of the single origin,” as a friend of mine calls it. As NPR reported recently, California generally and Humboldt County specifically are top name brands when it comes to dope. Some Emerald Triangle growers worry that the environmental negligence of the trespass growers could impact their public image.

After they heard about the fisher poisonings, Humboldt locals Penny Andrews, Uti Deva, and Kerry Reynolds launched a campaign against the sale of rat poison. They went around to local horticulture supply shops and hardware stores and asked them to stop selling rodenticides.“We were upset that stores in our area were selling rat poison by the pallet,” Reynolds, who hosts a monthly radio show called Cannabis Consciousness, told me. “You can buy it in four-pound boxes. That is far more rat poison than is needed. “

She says that three area businesses agreed to stop selling rat poison. Reynolds then approached her county supervisor to ask if the board of supervisors could pass a resolution against the sale of rodenticides. Her grassroots lobbying worked. In May the Humboldt County Board of Supervisors passed a non-binding resolution urging stores in the county to cease selling rat poisons.

The resolution quickly received pushback from a chemical manufacturer called Reckitt Benckiser that makes the rat poison d-CON. In a letter to Humboldt supervisors, a company executive warned that the resolution “could have a profound impact on Humboldt County consumers by forcing them to choose from inferior, potentially more expensive, and possibly more dangerous pest management approaches.”

“What was interesting was the response from the manufacturer – they seemed really out of touch with the complexity of the issue,” says Gary Graham Hughes, executive director of the local Environmental Protection Information Center.  “They seemed completely unaware of this developing body of science that is showing this toxic material getting way far back in the backcountry and getting into the food chain.”

(Reckitt Benckiser did not respond to a request for comment.)

Environmental activists and growers say they are committed to continue exploring ways to make the pot growing industry more – I guess you could say – green. On Earth Day Humboldt State hosted a symposium on sustainable cannabis cultivation. A group called the Emerald Growers Association has put out a booklet on the most eco-friendly pot growing practices. And Humboldt locals says they want to pass other rat poison resolutions in the neighboring counties. “It’s about raising people’s awareness and it’s about public education,” Reynolds says. “No amount of rat poison is very good for wildlife.”