"I'm So Excited!": An air disaster, made fabulous

Celebrate gay pride with Pedro Almodóvar -- and an outrageous sex, drugs and death party on board a doomed plane 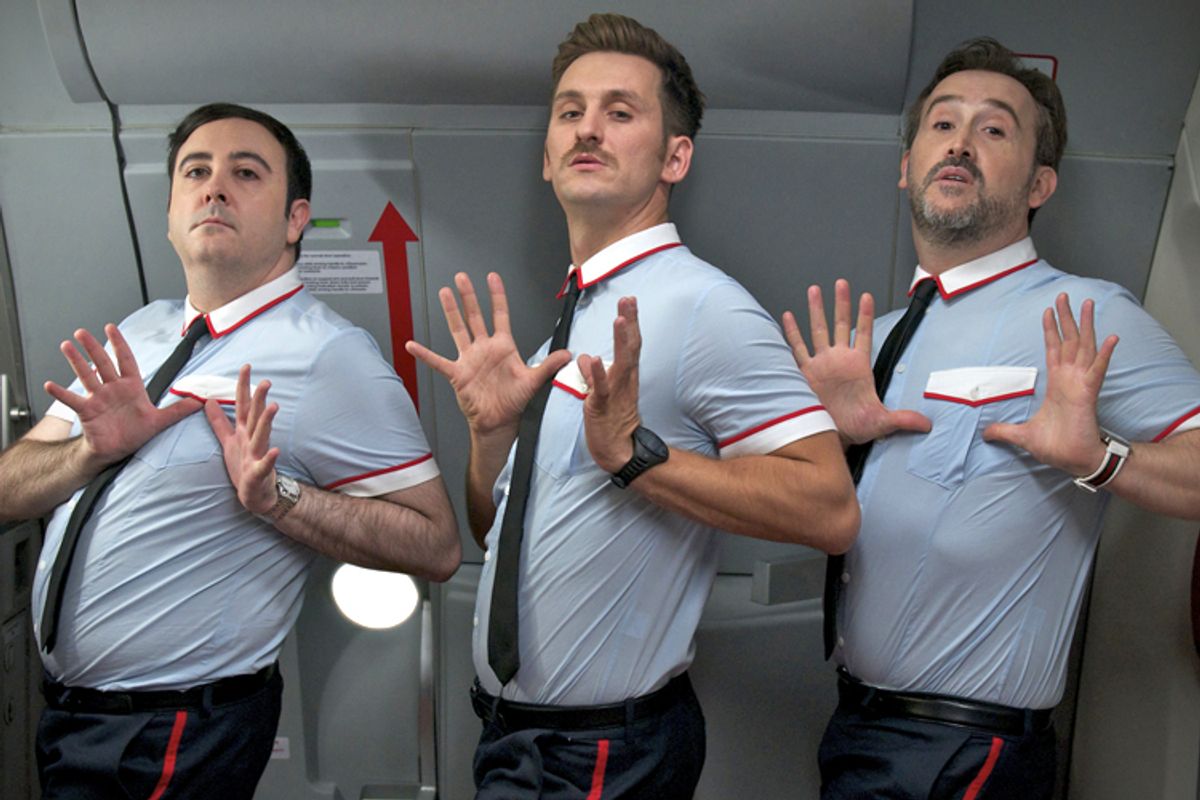 But Almodóvar isn’t just flashing back, retro-style, to the era of “Pepi, Luci, Bom” and “What Have I Done to Deserve This?” He’s also returning to a core principle of that era and of his work, which is that human sexuality, as much as it drives us crazy and makes us do stupid things, is also a force for the liberation of the human soul. And while I’m certain that Almodóvar would reject any suggestion that he sees gay sexuality as in any way superior to the hetero variety – he’s happy to depict characters of every possible orientation as ridiculous, despicable and/or irresistible – this movie is a no-apologies, flat-out celebration of gayness. If that celebration always carries with it more than a hint of self-mockery, as in the hideous but meticulous livery and design of Peninsula Airlines or the karaoke number performed by three male flight attendants that gives the movie its English title (while mostly irritating the passengers), that too is a crucial ingredient of the queer-cinema aesthetic.

One way of viewing “I’m So Excited!” is to suggest that Almodóvar simply needed to recharge his batteries after a run of more serious recent films that began with “All About My Mother” in 1999, includes the near-masterpieces “Talk to Her,” “Bad Education” and “Volver,” and ran off the rails a little with the Frankensteinian Gothic fable “The Skin I Live In.” At least on the surface, this movie is lighter in tone and slighter of ambition than anything he’s made since the early ‘90s, and is also loaded with in-jokes and references to Almodóvar’s earlier work. We begin, in fact, with a sketch comedy episode featuring Antonio Banderas and Penélope Cruz as incompetent runway workers at the Madrid airport – they’ve both appeared numerous times in Almodóvar films, but never together.

Because those two are more focused on each other than the job they’re supposed to be doing – such is the power of love! – Peninsula Flight 2549, supposedly en route to Mexico City, is in big trouble. The macho, men-of-few-words pilots, Alex (Antonio de la Torre) and Benito (Hugo Silva), may have to pull off a treacherous emergency landing that could break the plane apart. What better time to discuss Alex’s bisexual love triangle, involving his wife and Joserra (Javier Cámara), the plane’s chief steward? Or for Benito to reveal the true extent of his experiments in fellatio, which seem (as it were) to be deepening all the time? (Almodóvar has made clear that this movie has no pretensions toward realism when it comes to air safety or anything else. If you want to go ahead and be offended by it, I’m sure he’ll be delighted.)

Those two at least are flying the plane, and not drinking quite as much whiskey, tequila and wine as Joserra and his fellow flight attendants, the plump and judgmental Fajas (Carlos Areces) and the impeccably coiffed, resolutely ironic Ulloa (Raúl Arévalo). No straight director could ever get away with depicting a trio of male flight attendants as a pack of effeminate queens, but even in the restricted airspace of this movie, Almodóvar works his magic: These three may begin as a sort of comical, über-gay Greek chorus, but by the end of the movie they are individuals, as flawed and tragic as the rest of us.

Whether you want to see those guys as the Three Fates or the witches from Macbeth – and whether you want to see them in their slightly too tight baby-blue-trimmed-with-red uniform shirts at all – the flight attendants serve as commentators on the Chaucerian ensemble of business-class passengers, some of whom face fates that almost make dying in an air disaster look attractive. There’s a notorious madam and dominatrix (longtime Almodóvar pal Cecilia Roth, who starred in “All About My Mother,” “Labyrinth of Passion” and other films), who may be the target of a hitman -- and finds herself drawn to the suave Mexican stranger (José María Yazpik) sitting next to her. There’s a crooked businessman (José Luis Torrijo), who’s trying to flee with his ill-gotten millions, but would give it all up to get his estranged daughter back. There’s the soap-opera Lothario (Guillermo Toledo) who has jilted zillions of women but got dumped by the only one he ever loved.

As the booze, rampant sex and smuggled drug-mule mescaline tablets (yes, you do know where those have been and how they got on board) push the party to fever pitch, and the flight attendants’ galley seems to expand to infinite size, like Doctor Who’s time machine, there’s also the matter of the virginal psychic. Lola Dueñas, one of my all-time favorites in the Almodóvar arsenal of odd-looking beautiful women, roams the plane in a too-prim dress and slightly outdated hairstyle, cheerfully announcing to everyone that she can see the future and that this is the day she will finally get laid. She’s right about that last part, anyway, although I’m not sure psychic abilities are involved. “I’m So Excited!” ends on a note of metaphysical doubt that leaves us unclear whether the passengers have returned to Spain or traveled on to a more distant destination. Like them, we’re all on an ambiguous journey toward uncertain freedom, trying to work it all out as best we can before it’s too late.