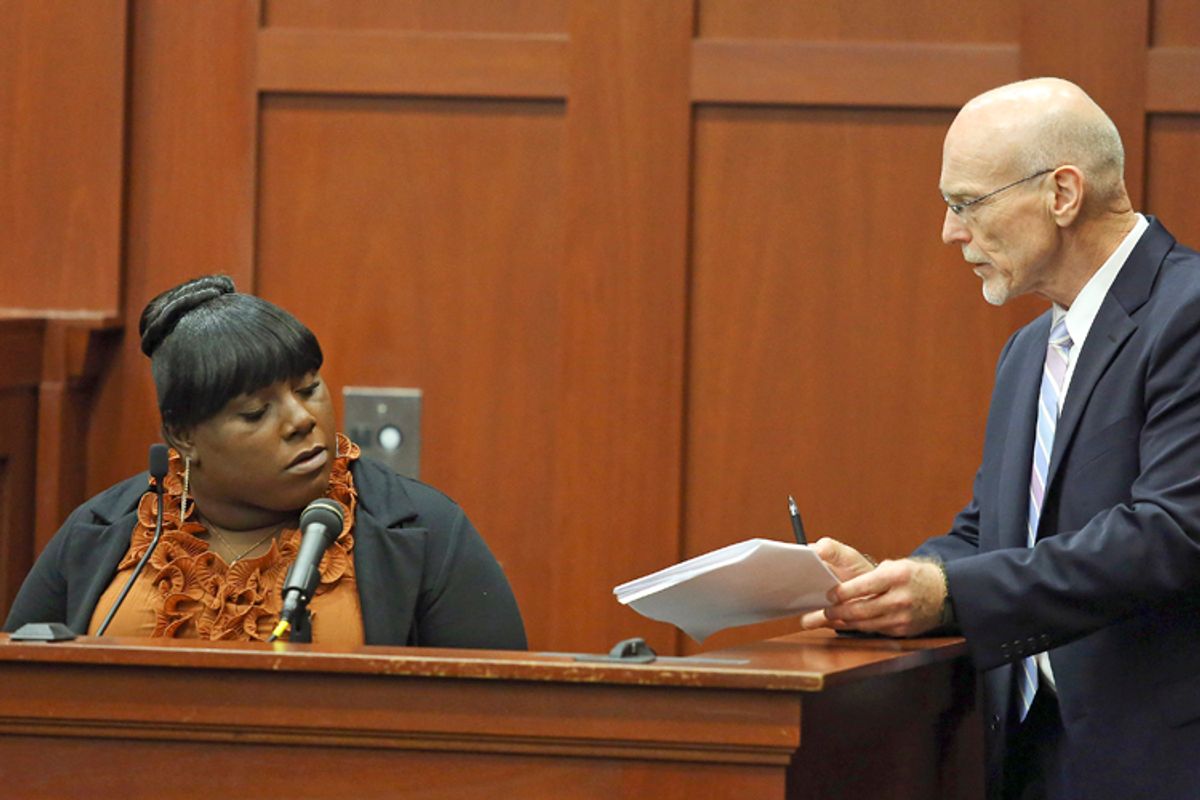 Trayvon Martin’s trial might be intriguing, fascinating cultural theater to some. To me, it is more akin to a cultural trauma: a continual reminder of how unsafe all those young black men that I love actually are as they move through the world -- and how tenuous and torturous it would be to seek justice on their behalf. Troubled, though, by the negative characterizations of Trayvon Martin’s friend Rachel Jeantel, after her first day of testimony, I tuned in yesterday in a show of sofa-based, sister-girl solidarity.

Immediately, I heard newscasters referring to her prior testimony, which I had watched on video, as combative and aggressive. And I felt my pressure start to rise.

These kinds of terms – combat, aggression, anger – stalk black women, especially black women who are dark-skinned and plus-sized like Rachel, at every turn seeking to discredit the validity of our experiences and render invisible our traumas. By painting Rachel Jeantel as the aggressor, as the one prone to telling lies and spreading untruths, it became easy for the white male defense attorney to treat this 19-year-old, working-class black girl, a witness to the murder of her friend, as hostile, as a threat, as the one who needed to be regulated and contained and put in her place.

I know these are just classic legal maneuvers of a good defense. Yet these maneuvers also provide an eerily perfect diagram of the cultural grammar that determines how black folks move through the world, always already cast as the aggressors, always necessarily on the defensive, all too often victimized, all too rarely vindicated.

No one knows this better than Trayvon Martin.

The thing about grammars, though, is that they rely on language, on a way of speaking and communicating, to give them power. And Rachel Jeantel has her own particular, idiosyncratic black girl idiom, a mashup of her Haitian and Dominican working-class background, her U.S. Southern upbringing, and the three languages – Hatian Kreyol (or Creole), Spanish and English -- that she speaks.

The unique quality of her black vernacular speaking style became hypervisible against the backdrop of powerful white men fluently deploying corporate, proper English in ways that she could not do.  The way they spoke to her was designed not only to discredit her, but to condescend to and humiliate her. She acknowledged this show of white male power by repeatedly punctuating her responses with a curt but loaded, “Yes, Sir.”

Still, legions of black people watched and cringed internally, expressing shame, disgust and embarrassment at her lack of polish. Some referred to her as “Precious,” the beleaguered female movie protagonist played by Oscar-nominee Gabourey Sidibe.

There is a reason that black people in public life learn to be as articulate as Barack Obama or Oprah Winfrey. Stakes is high. When given the opportunity to speak, you wanna make for damn sure you are heard.

But justice should be no respecter of persons, or it isn’t justice.

What we witnessed with Jeantel was a deliberate attempt by the defense to mis-hear and misunderstand her, to suggest, for instance, that statements like “I coulda hear Trayvon, Trayvon,” meant that, in fact, she did not hear Trayvon screaming for George Zimmerman to “get off, get off,” of him.

Still she maintained her composure and clarified, “That means I could hear Trayvon.”

Gayatri Spivak once famously asked, “Can the subaltern speak?” Forever, I have thought the question was wrong. The problem was not in her speaking, but in their hearing.

But those of us who came to listen heard her loud and clear. Zimmerman followed, confronted and eventually murdered her friend, while she listened on the phone hoping simply that her friend made it back to his “daddy’s house.”

Given the hostile and combative space into which she entered, a space in which she had to fight for the integrity of her own words, combativeness seems like the most appropriate posture.

If the justification for the defense attorney’s combativeness is “he was doing his job,” then I submit: So was Rachel.

She was there to defend her friend. And herself. Though she was not on trial, she seemed to know instinctively that black womanhood, black manhood and urban adolescence are always on trial in the American imaginary.

By choosing to take the stand and fight for her friend, she was fighting for so much more than simply him. She was fighting for the right of black people to be seen and heard, for our testimony about our traumas to be believed, no matter how inelegantly stated.

Rachel Jeantel took the stand and told the gut-wrenching, heartbreaking, ugly truth. My only hope is that the jury truly listened.