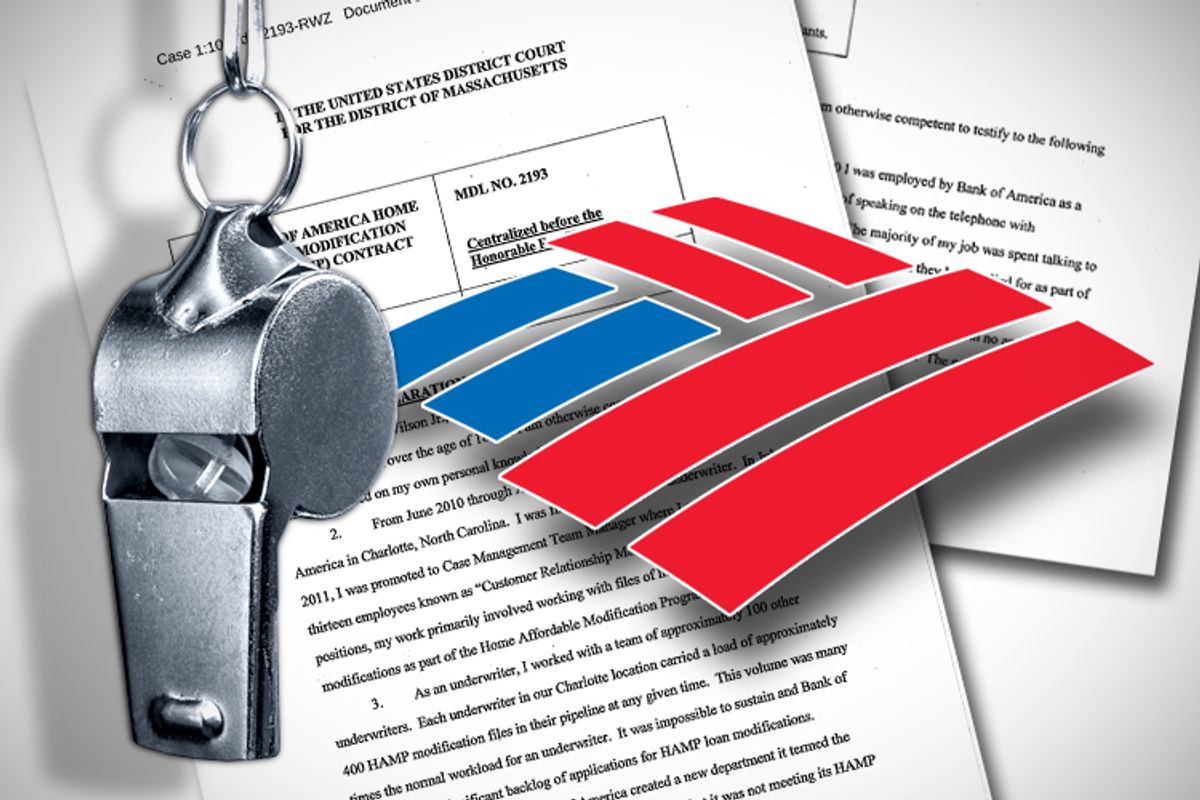 Last week, I detailed bombshell revelations from Bank of America whistle-blowers, in which former employees of the bank detailed systematic fraud and deceptive practices inside their loan modification department -- including bonuses and Target gift cards for staff who racked up foreclosures.

Now, another new lawsuit, featuring a separate whistle-blower, contains additional remarkable revelations – and may shed light on Bank of America’s strategy in getting out from under the mountain of legal exposure and costs in which it now finds itself. Simply put, the bank seeks to pocket quick cash and evade practices set forth in major settlements – by cashing out of the subprime mortgage servicing business. The result would be to leave struggling homeowners back at square one, with even fewer protections to avoid foreclosure.

First, some background. Over the past year, non-bank servicers like Nationstar and Ocwen have been buying up servicing rights to millions of mortgages, gradually positioning themselves to become the biggest companies in the space. These non-bank servicers, which process monthly payments and deal with foreclosures but do not originate loans, have an asset not available to their big bank colleagues: They haven’t yet been officially caught scamming customers. Therefore, they are not a party to the various servicer settlements brought by state and federal regulators, and they need not submit to those settlement guidelines. This includes rules like establishing a single point of contact for borrowers, stopping foreclosure operations when a modification is in process (ending what is known as “dual track”) and facilitating proper payment processing.

All of this has come to a head in a class-action lawsuit filed by Leonard Law Office in Massachusetts against Green Tree Servicing, a non-bank servicer based in St. Paul, Minn. As detailed by an insider at Bank of America in a packet of documents, in January 2013, BofA sold servicing rights to 650,000 mortgages (worth $93 billion) to the parent company for Green Tree.

Like Nationstar and Ocwen, Green Tree is not part of any servicing settlements, nor do they have to abide by any guidelines set by those agreements, even though the loans they purchased were subject to those guidelines when they were in the hands of BofA. Moreover, as a non-bank servicer, Green Tree has traditionally had less stringent oversight from federal regulators, though the Consumer Financial Protection Bureau is fixing to change that.

Of course, servicers like Green Tree, Nationstar and Ocwen have terrible reputations as among the worst servicers in the country (worse than Bank of America, if you can imagine that). Among the charges Leonard Law Office made against Green Tree were claims that the servicer imposed illegal fees to process any kind of payment; failed to process mailed payments on time; harassed borrowers by calling them at all hours of the night and using abusive language to try to collect on debts; and delayed or denied timely modifications. These practices violate such federal laws as the Fair Debt Collection Practices Act, the Telephone Consumer Protections Act, and others. Complaints about Green Tree’s practices litter theInternet.

And some complaints have gone to court, like the case of a Florida widow who claimed that Green Tree debt collectors called her husband, as well as his co-workers and relatives, nine times a day about a mortgage debt. Nationstar and Ocwen have seen their share of complaints as well. One innovative Ocwen scam involves sending homeowners a check for $3.50, and claiming that cashing the check automatically enrolls the customer in an appliance insurance plan, which costs $54.95 a month.

Here’s where Bank of America comes in. According to a bank insider, this is part of a deliberate effort to flip the servicing rights for a quick buck and get out from under the scrutiny of the various settlements. “Brian Moynihan, Ron Sturzenegger and Tony Meola are well aware of the reputations of these servicers,” says the insider, referring to Bank of America’s CEO and two high-level executives. “Ron is a dealmaker, not an operations guy. He was brought in to sell the stuff.”

Sturzenegger runs Bank of America’s Legacy Asset Servicing Division, $1 trillion or so of the shakiest loans at the bank.  By selling off servicing rights, suddenly the bank doesn’t have to comply with settlement practices, nor do they have to increase staff for compliance purposes. So not only do they get some ready cash, they lower their labor costs.

Sturzenegger worked with Meola, the executive of Fulfillment Operations, to put together the “Bulk Transfer Program,” selling off these mostly delinquent loans to disreputable servicers like Green Tree and Nationstar (the more reputable ones didn’t want any part of them). But they only sold the “subservicing” rights. Non-bank servicers like Green Tree service the loans, but Bank of America held onto the so-called master servicing rights. This means that the bank still gets some of the profits from servicing the loans, and none of the responsibility to comply with settlements. Bank of America added a million-plus current loans to the mix of shakier loans to sweeten the pot for the subservicers.

In the most damning charge, the insider noted that, “It may mean that any modification currently in process with BAC (Bank of America) will not be recognized and the borrower will proceed into foreclosure.” This is almost certainly true, and it’s a very common practice. Servicers who purchase servicing rights are not obligated to follow through on prior agreements with homeowners on loan modifications that have not yet been made permanent. So the homeowner, who thought they were well on their way to saving their home, instead has to start all over with a new servicer.

Here’s one example from a former Bank of America customer in Puget Sound, Wash., whose switch to Green Tree voided his short sale and put him back in modification hell. Even if the borrower was getting special treatment because of a natural disaster like Hurricane Sandy, that treatment would be voided once the new subservicer entered the picture. The Fitch rating agency has recognized the danger of selling off distressed servicing rights to these non-bank operations, saying in a research note that “the growth and outsized scale of larger nonbank servicers may pose challenges to a potential orderly transfer of servicing.” Struggling homeowners will bear the brunt of these challenges.

Once Charles Giannotti, a friend of Bank of America CEO Brian Moynihan, found out that his servicing transferred to Nationstar, he emailed in a fit of rage. “Are you aware of the fact that your bank is turning its customers over to a processor that based on the complaints posted appears to not only lack basic competency but also poor customer service?” Giannotti fumed. This set off a flood of CYA emails within the bank from senior executives, responding to Moynihan’s queries about the scheme.

Regardless of how Bank of America resolves this situation, the damage to homeowners has already been done. Homeowners don’t get to choose their servicer – they just get passed around at the whim of big mortgage companies. And every time the servicing rights get transferred, they have to deal with a whole new set of practices. If they were fighting foreclosure at the time of the switch, then they have to start over, under typically disadvantageous circumstances. And that’s especially true when their new servicer sits outside the glare of strict oversight.

Bank of America’s reputation is already unsalvageable. But avoiding requirements they were forced to make to homeowners to compensate for an initial round of illegal practices, by selling the servicing rights off to fly-by-night organizations that specialize in abusing customers, just about takes the cake. And they’re profiting from it, too.