From "The Heat" to "White House Down," from Snowden to gay rights, America plays both hero and villain 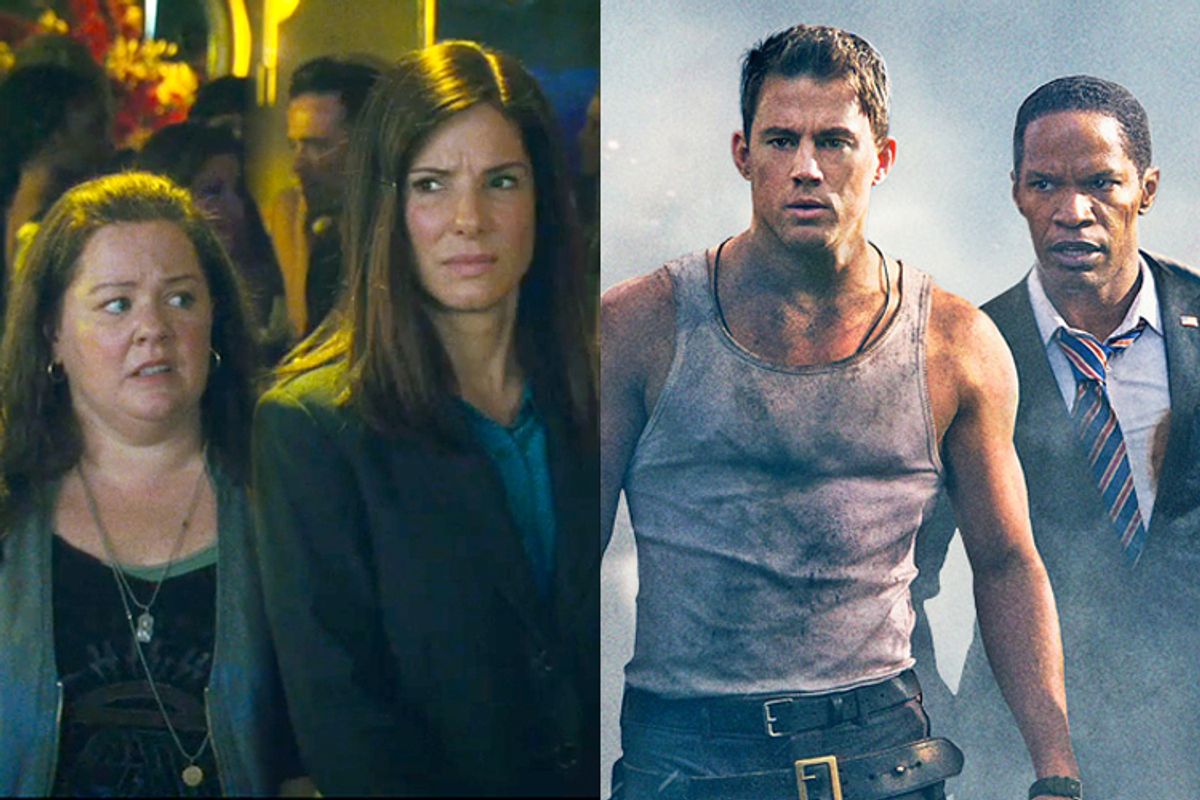 At the close of one of the most momentous news weeks in recent history – with a historic step forward for marriage equality, a historic disembowelment of voting rights and the United States coming off like an incompetent supervillain in the hunt for Edward Snowden – we’re faced once again with utterly confusing signals about what kind of country we live in. A couple of weeks ago, I wrote about the deepening similarities between our society and the imagined dystopias of “1984” and “Brave New World,” but it’s important to acknowledge that that isn’t the whole story. At the same time, American society remains immensely dynamic, and has become far more diverse and tolerant over the last several decades. I know this is a metaphorical misuse of a clinical term that refers to a serious and complex mental disorder, but at least in the old-fashioned, split-personality sense of the word, America is schizophrenic. For that matter, I’m not so sure we can rule out the clinical mental disorder either.

In one of those weird accidents that pop culture makes possible, even the week’s big Hollywood movies echo this theme. “White House Down” is an MSNBC-informed action flick in which enraged warmongers stage a coup against a fantasy version of Barack Obama, played by Jamie Foxx, who seems in various ways preferable to the real thing. (Just to make the most obvious point, the military-industrial cabal has no cause to overthrow Obama.) It’s a liberal fantasy about democratic possibility and a conservative or fascistic fantasy about might and heroism, at the same time. Meanwhile, “The Heat” applies the same strain of diluted feminism that produced “Bridesmaids” to the cop-buddy movie, making the point that we live in a nation where women can become hard-ass FBI agents and trash-talking street cops – and can throw suspects off buildings, steal evidence and deploy all the sinister law-enforcement tactics of the “war on drugs,” just like guys do.

The Snowden saga sent me back to a book I once found among my wife’s history collection that has fascinated me for years, one that captured a recent era that seemed so alien it might as well have been science fiction. It’s called “Conversation With Eldridge Cleaver,” and it was published in 1970. After a lot of legwork and negotiation, author and photographer Lee Lockwood – a well-known journalist at the time, who had done a famous 1965 interview with Fidel Castro -- had tracked down the exiled Black Panther leader in Algeria. Cleaver had jumped bail on attempted murder charges in Oakland, Calif., which he claimed were politically motivated, and had been on the run in parts unknown for two years. (I was hoping to ask Lockwood about his memories of this experience, but I missed my chance – he died in 2010.) Rather suddenly, that era of the radical-chic fugitive doesn’t feel as distant as it used to.

Cleaver and Edward Snowden are very different cases, to be sure. For one thing, the Cleaver of 1970 was a genuine Marxist revolutionary who wanted to organize African-Americans for guerrilla warfare, although by the time he returned to the United States five years later, both he and the government were eager to forget all that. (Cleaver never did any jail time for the Oakland shootings, in which two police officers had been injured.) For another, in those low-tech Cold War days, it was easier to find places beyond the reach of the U.S imperium, and ways to make ends meet. Cleaver later claimed that he supported a whole Panther network in Algiers on a cash allowance from the North Vietnamese government, and also by running an auto-theft ring that stole cars in France and sold them in Africa. I don't think Snowden's skill set tends in the latter direction, and the supply of government money for posses of exiled radicals has pretty much dried up all over the world.

What kind of country was Cleaver running from, and what kind has Snowden escaped, at least temporarily? Are the changes between 1970 and 2013 – or between 1790 and 2013, for that matter -- fundamental or superficial? When Channing Tatum singlehandedly takes on the right-wing shock troops to save President Jamie Foxx in "White House Down," what's he fighting for? Trying to figure out what kind of place America is has been a devilish matter, ever since the days when Thomas Jefferson wrote all that beautiful prose about freedom in the afternoon, and then visited the slave quarters at night. Cleaver certainly never figured it out: His conversation with Lockwood is steeped in Marxist theory and angry rhetoric about American racism and imperialism, but after returning home he dyed himself in cartoonish shades of red, white and blue, becoming an evangelical Christian, a Reagan Republican and finally a Mormon.

Much as revolutionaries like Cleaver once did, Snowden has opened up a fascinating fissure within the American left, a “whose side are you on?” division that’s rife with uncertainty. Partly this has to do with the “insurrectionist vs. institutionalist” debate that’s been pushed by author and MSNBC commentator Chris Hayes lately (while himself straddling the fence between the two). But Hayes’ dichotomy is just another way of talking about what kind of country this is. In his schema, if you believe our government is fundamentally or irreparably flawed, and exposing its misdeeds is worthwhile at almost any cost, then you’re likely to root for Snowden (along with Bradley Manning and Julian Assange, of course). Noam Chomsky, Glenn Greenwald and Paul Krugman are among the most obvious insurrectionists in the contemporary media.

On the other hand, if you believe in ringing doorbells, signing petitions and working for change within the system, you’re an institutionalist, and thereby in grave peril of writing something as pompous and school-principal-like as Jeffrey Toobin’s pseudo-stern takedown of Snowden as “a grandiose narcissist who deserves to be in prison.” (I was not aware that writing for th New Yorker conferred the ability to make psychiatric diagnoses at a distance.) Toobin explains: “Our system offers legal options to disgruntled government employees and contractors.” Thanks, system! I know which side of this divide I fall on, generally speaking, but the problem with Hayes’ categories is that they sound absolute, as if they described different kinds of people with fixed agendas – destruction or reform. Hardly anyone in real life approaches these issues that way.

Both aspects of the two-faced or “schizophrenic” character of America are real, and all of us are insurrectionist and institutionalists at different times on different issues. We live in a terrifying national-security superstate that is also a rapidly evolving and dynamic moral community, and it’s only natural to respond to that with mixed emotions. The country that has finally chucked the noxious social engineering of the Defense of Marriage Act and taken a decisive step toward equality for gay citizens is also the country that took a dangerous step backward (or at least sideways) on protecting the right to vote – and is also the sinister behemoth that has lumbered around the world in pursuit of a slight, bespectacled 29-year-old computer geek, with billions of onlookers cheering him on. As “The Heat” succinctly if inadvertently puts it, women can be dirty cops too.

Jeffrey Toobin claims to understand the morality of what Edward Snowden did, and does not approve; he will presumably feel sober but gratified if and when the superpower’s espionage apparatus finally reels Snowden in. I feel differently, but I will also concede that the long-term moral calculus of Snowden's actions is tough to figure, and that my instinctive desire to support Snowden is largely based on an emotional or narrative understanding of the situation. I’m not so sure that’s a bad way to look at it. History is a story, after all, and as in “White House Down” the question of whether the United States goes down in history as hero or villain, as peacemaker or fomenter of perma-war, very much hangs in the balance.

Rebels, whistle-blowers and moral transgressors of all kinds play crucial roles in that story, puncturing the arrogance of the powerful and reminding the rest of us that change remains possible and the future has yet to be written. Some rebels may have pure motives and a clearly worked-out philosophy: Rosa Parks was not just a tired lady who wanted to sit down a while. But it’s notoriously difficult to judge those things in the historical moment, and the murkier, more challenging cases, the Cleavers and Snowdens, serve their purpose too. Sometimes they wind up seeking refuge in some repressive backwater state or a Moscow airport hotel, while the Toobins of the world tell us how ironic it is and proclaim them criminals and deviants. Sometimes they go to jail, like the men and women who resisted arrest at the Stonewall Inn in 1969, and were derided – not just by the mainstream press but by the snarky and self-satisfied left press of the day – as the “forces of faggotry.” What kind of country do we have? The kind that could use more rebels.