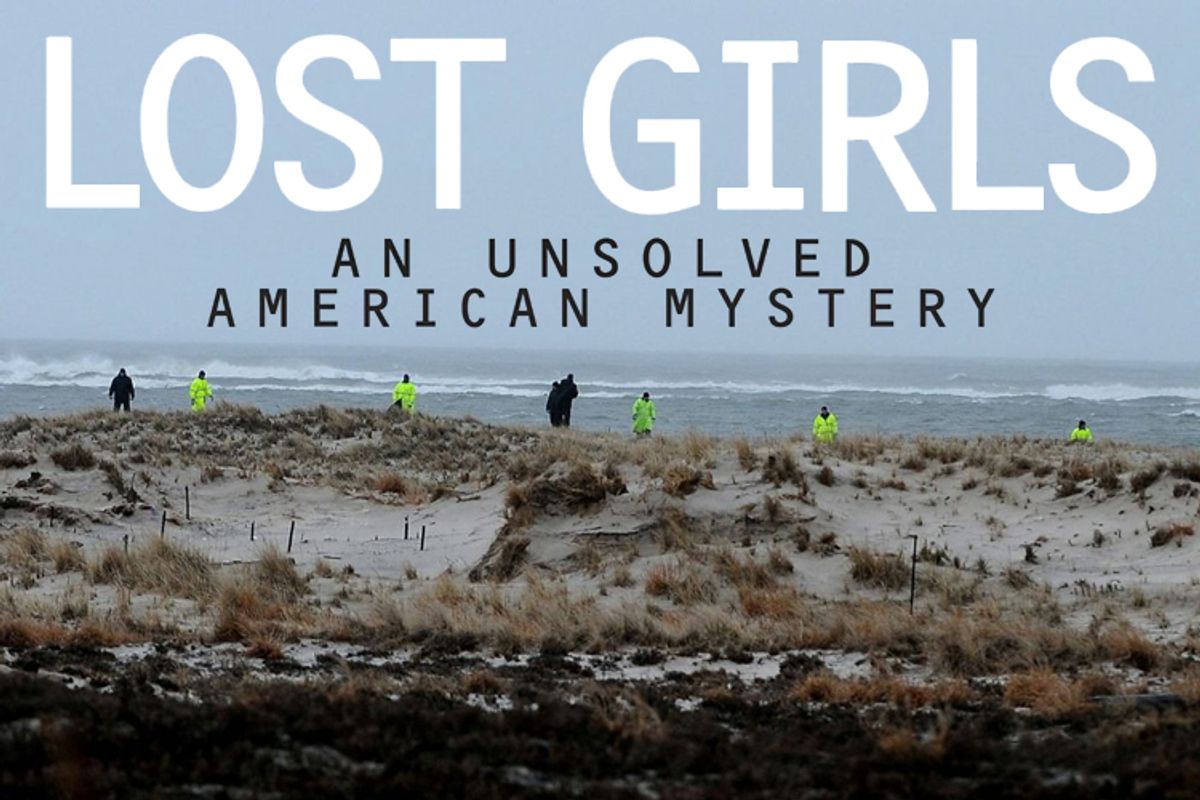 There's a hole at the center of Robert Kolker's new book, "Lost Girls: An Unsolved American Mystery," and he lets you know it right in the subtitle. Kolker, a contributing editor at New York magazine, has covered the Long Island Serial Killer case for that publication, and the case remains open. At least four and possibly as many as 14 murders have been attributed to a still-unknown individual who dumped his victims' remains along the desolate 15-mile stretch of Ocean Parkway beside Gilgo Beach, on one of the barrier islands of Suffolk County, N.Y.

What many true crime aficionados would regard as the most important element of the crimes -- the identity of the perpetrator -- is the one piece of information Kolker, along with everybody else investigating the killings, cannot supply. Surely a few readers of "Lost Girls" will find this unsatisfying, but that will be their shortcoming, not Kolker's. The absence of the killer is the making of this book, a constraint that allows it to become extraordinary.

Serial killers exert a demonic magnetism in American culture; they suck up our attention with the extremity of their terrible deeds and their unfathomable motives. We find them fascinating, even as we revile them as sick, and the fact that "Lost Girls" concerns one of them will no doubt attract many readers to Kolker's book. What they will find instead of tabloid shockers and chills is a sweepingly reported portrait of the world in which such monsters operate, how it creates opportunities for them to kill and what happens to those left behind.

The case opened in the early hours of May 1, 2010, when a distraught young woman named Shannan Gilbert pounded on the door of Gus Coletti's house in the tucked-away community of Oak Beach. Whether Coletti let Shannan inside or not is a matter of debate, but in any event she ran off down the street, hammering on other doors, after he told her he'd called the police. (She was already on her cellphone with 911.) Shannan was last seen running in the direction of a nearby marsh.

Shannan was an escort who had been hired by Joe Brewer, the hard-partying, ne'er-do-well scion of a wealthy Long Island real estate clan. She'd arrived in Oak Beach with a driver and become upset while in Brewer's house, but neither man had been able to persuade her to get back in the car and leave. After she ran, her driver was unable to find her or reach her on her cellphone, and eventually he went home. The next day, her boyfriend drove from Jersey City to search for her and he and Brewer tried to file a missing persons report. (The Suffolk cops gave them the brushoff and told the boyfriend to file the report in New Jersey.)

If it were not for a canine-unit officer who resolved to scour the area as part of a training exercise that December, the police might never have found the four bodies wrapped in burlap further down the highway from town. None of them were Shannan, but they were all eventually identified as escorts who, like Shannan, advertised on Craigslist: Maureen Bainard-Barnes, Melissa Barthelemy, Megan Waterman and Amber Overstreet Costello. In time, six other bodies or parts of bodies were found along the parkway, some of which matched body parts found in other locations in Long Island. It's still not clear if all of these people were victims of the same killer, but Suffolk County District Attorney Thomas Spota told the press, "It is clear that the area in and around Gilgo Beach has been used to discard human remains for some period of time."

The investigation, which is ongoing, is not the primary subject of "Lost Girls," and whether or not Shannan was murdered at all is in dispute. The first part of the book describes the young victims' lives up until the days they disappeared, tracking how they became involved with prostitution and why four of them might have been willing to put themselves in the perilous situation of visiting a client without security. There's much that you might expect in these stories -- fractured families, mental illness, rape, impractical fantasies of modeling and singing careers, drugs and exploitative boyfriends -- but also much that might have pointed to a happier ending as well. Melissa got excellent grades in high school, Amber's parents stayed together, Maureen wrote poetry, Shannan could really sing. Most had difficult relationships with the maternal figures in their lives (mothers, grandmothers and older sisters), but not all.

One inevitably recurring note, however, is poverty: the uninsured family brought to its knees by medical expenses, the hometowns gutted by the evaporation of decent-paying blue-collar jobs, the hard-won degree followed by minimum wage employment, the impossibility of raising a baby on public assistance. At times, the profiles in "Lost Girls" bear a resemblance to those in George Packer's "The Unwinding." Sex work offers fast, plentiful cash to vulnerable young women with few marketable skills or career options, and as the sister of one of the victims (herself an escort) explains, "then you get addicted to the money."

Once the four undisputed victims of the Long Island Serial Killer were discovered, disappearances that had before aroused little interest in the authorities suddenly became front-page news. The usual media circus (including Nancy Grace) ensued, complete with self-styled profilers and would-be amateur Web sleuths who detected important "clues" -- just by watching TV! ("I have been watching that interview of the Dr. and observing his body language," one such wanker wrote about a favorite suspect. "He averts his eyes down and to the left a few times while he is speaking. Isn't that a sign of deception when someone averts their eyes down and to the left?")

Another "expert," interviewed by the Daily News, was Joel Rifkin, a man who killed as many as 17 sex workers in New York City and Long Island during the 1990s. Rifkin opined that serial killers often choose prostitutes as victims because "No family. They can be gone six or eight months, and no one is looking." But as Kolker conclusively shows, people were looking: parents, siblings, boyfriends, friends, roommates. However troubled their lives and relationships, all five of the women featured in "Lost Girls" had people who loved and missed them. A few, like Maureen, even had a dedicated police officer or two who took their cases seriously.

For the most part, however, law enforcement greeted the women's disappearances with indifference -- until they all turned up dead in the same place. It seems it takes a maniac to make an escort's death really count for something. Kolker -- one of those journalists gifted with the ability to lull sources into a false sense of security -- quotes chief of detectives Dominick Varrone callously remarking, "Most of them are in the business that they're in because it's an easy way to make money, and because they're greedy." Later in the same conversation, Varrone and the outgoing police commissioner, Richard Dormer, laughed at the working-class family members of crime victims for "doing their hair and dressing up" to make appeals through the media. Police officials are not the only ones with cavalier attitudes, however. Watching the families of the other four victims weeping together with Shannan's mother on the day her daughter's remains were found, Kolker overheard one TV crew member remark, "I can't believe they're doing all this for a whore."

Much of Kolker's research was gathered among the family members. The result is a sensitive but never idealized or sentimental depiction of already battered people attempting to cope with and respond to a horrific tragedy. As characters, these mothers and sisters and aunts and brothers are maddening, self-defeating, showboating, disingenuous, short-sighted, needlessly combative and a dozen other problematic adjectives I could list. But, like the characters in a great novel, they're also acutely moving as they form and dissolve and reform alliances with each other to try to achieve justice for their loved ones. (Facebook plays a major role in this process.) Another fascinating subplot concerns the homeowners of Oak Beach and how the notoriety of the case fed into long-standing feuds and vendettas among them.

It's the empty freakishness of the serial killer that makes him superficially fascinating, the stuff that so much bad pulp fiction and so many trashy documentaries are made of. It takes a rarer, more humane and imaginative writer to show the dented magnificence and universal sorrow within ordinary lives, and make you realize how much more they are worth.