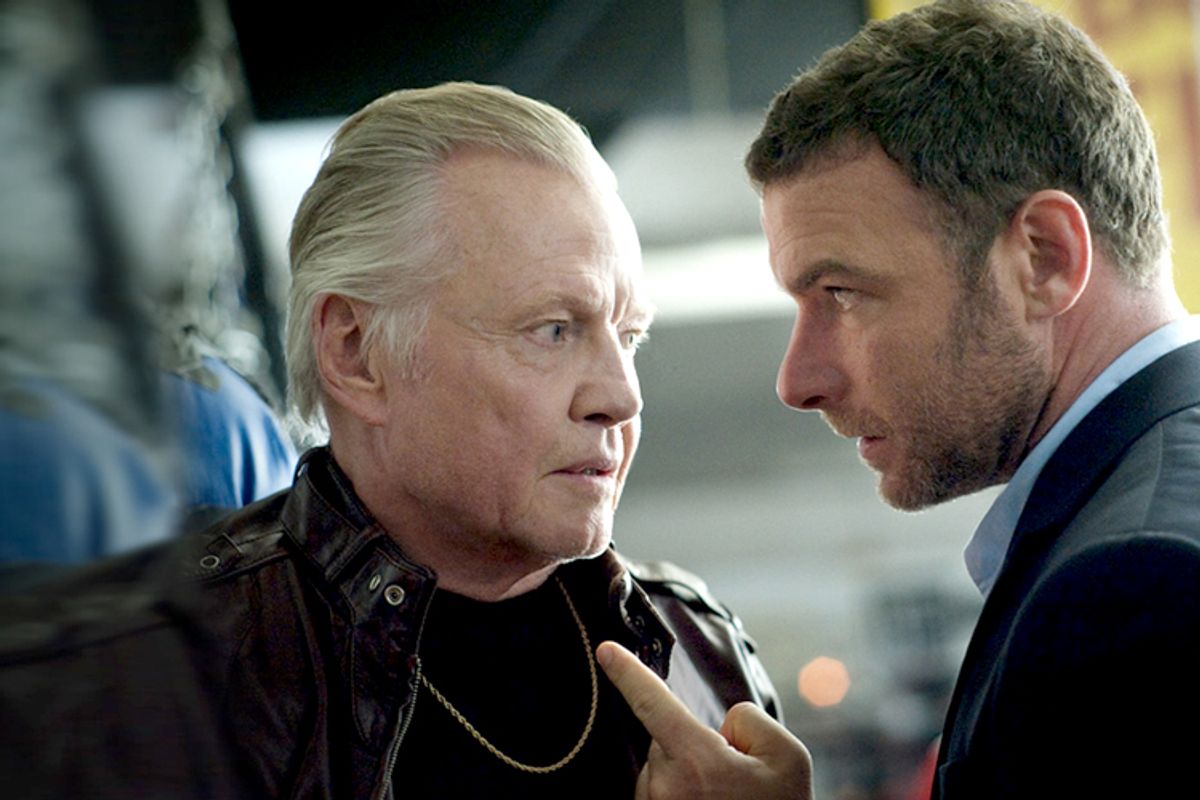 "Ray Donovan," which premieres Sunday night on Showtime, is another antihero drama. It stars Liev Schreiber as the titular character, a Boston-born man whose entire family — his wife, kids and two brothers — has been transplanted to Los Angeles, where he works as a fixer, solving problems  — dead bodies in bed, blackmail, stalkers— for the rich and sometimes famous. In the first episode, Donovan's father, Mickey (Jon Voight, with a raging Boston accent), is released from prison, immediately goes and shoots the priest who molested one of his sons, and then heads out to L.A., where his son wants nothing to do with him. "Ray Donovan" is the creation of Ann Biderman, a lively, blunt-talking woman who also created and ran the great, recently ended, TNT cop show "Southland." I spoke with Biderman about "Ray Donovan," "macho" subject matter, and writing whatever the hell she wants.

With “Southland,” you made a cop show, and, obviously, there have been a lot of cop shows before. With “Ray Donovan,” there are lots of elements and tropes — Boston, boxing, gangsterism — that we’ve also seen before. Do you think about how to use these elements and address these genres in original ways?

I really don’t, particularly. It’s more like, what do I want to write about and how do I want to do it? It’s not really that contrived. I mean with “Southland,” when John Wells and Chris Chulack called me about that show, and asked did I want to do a cop show, I wasn’t sure because I just thought there are so many. How do you do anything? How do I interest myself, is the first question. What grabs me about this? Not like, looking at every iteration and thinking, well how do I do something completely different? It’s not that. It’s more like, what will hold my interest over a long period of time? So with “Southland,” I just put myself back in that world. I knew cops from New York, and I researched cops for a film I wrote called “Copycat” years ago. I hadn’t spent time with L.A. cops in many years and I just had to put myself in that world for about six months, before I took the job.

What about “Ray Donovan” held your interest?

It wasn’t so much the Hollywood fixer thing, because that could have been a procedural. It could have been a case of the week, and I didn’t want to do that. And I didn’t want to do a satire on L.A. I didn’t want to do “Entourage.” But what really grabbed me is when I conflated two ideas. And one was the Hollywood fixer, and the other was when I started to think about a family drama, and the story I wanted to tell about these brothers, and this family, and this life, and a look at crime from the perspective of a South Boston family that has all landed in L.A. , and what I’m able to do then, what are the themes I’m able to deal with — in terms of class, in terms of crime, in terms of power, in terms of sex abuse by the church. And once those two ideas were married, that’s when I really became seriously interested.

It’s interesting because one of things about L.A. that’s nice for the show is that no one thinks about there being church in L.A.

Exactly, right. But there’s everything here. It’s not just a town built around the movies. Although, you know, "Ray Donovan" has to deal with that, too, but we were also very specific about how we didn’t want it to just be movie stars. There’s sports people, there’s rappers.

You know, I don’t know how to answer that. I just don’t. Everyone has their own limit, and what they find prurient, and what they find disgusting. It’s a hard thing to figure out. It’s a very complicated question, a very complicated answer. Some people don’t mind blood and guts, and other people are offended by it. I worry about it. I worry about what we’re putting in the world, of course. But I’m mostly thrilled by it.

Why are you so interested in this particular very macho male archetype? Do you know?

I don’t. I really don’t. I don’t know if it’s about protection or creating some idealized version of a man, some Pygmalion thing. Building the archetypal man that I desire, in some sense. But, you know, I think thin, anorexic men — it’s just not a turn-on to me. Without giving too much away, in terms of my personal life and sexuality, I just don’t find the whole metrosexual thing very compelling, on a personal level.

Was the boxing always a part of the show?

I guess. You know, I also like gardening too. It’s nutty. But I do like boxing. I had friends introduce me to boxing, and I enjoy it.

There are not a lot of women — Kathryn Bigelow comes to mind — writing so much about these really macho subjects and characters.

You know, I love [Bigelow’s] films and I really admire her. I know her and I really admire her very much. And I know she gets asked about it a lot, and so do I. But you just kind of follow your interests. There was this one woman who kept asking me, “How did you get into the boys club?” And I wanted to explain like, my life! It wasn’t some design, like, “I’ll be so outré and write about male things.” Even as a kid, these were things that interested me.

Do you get the reverse question, like why not write about more quote-unquote feminine things, or have more women in the writer’s room?

There are currently no women in the "Ray Donovan" writer's room. But you’re not interested in, like, counting, in making sure there are more women there, for example.

You know, I can’t stand that kind of affirmative action crap. Find the best person for the job. There was one point on “Southland” when it was all women, at the beginning. And this is all men. It just falls where it falls, and you’re looking for the best people. We have women directors. Next year I could turn around and have an all-female group. I think anybody can write about anything. I just never subscribed to the theory that there were certain subject matters that I had to write about. I’m not interested in weddings and dresses and dating— I mean, I’m interested in dating, but I’m not interested in how you contrive to get a man. None of that crap interests me. I don’t know why that is  “female subject matter” or why women think they need to write about that. Does that make sense? I guess I refuse to allow myself to be ghettoized in that way, to think that women have to write about feminine subject matter. I never subscribed to that. I always just did what I wanted and figured I’m allowed to write about whatever the fuck I want to write about.