"So many of the guys who let this happen remain in positions of authority in the church today." 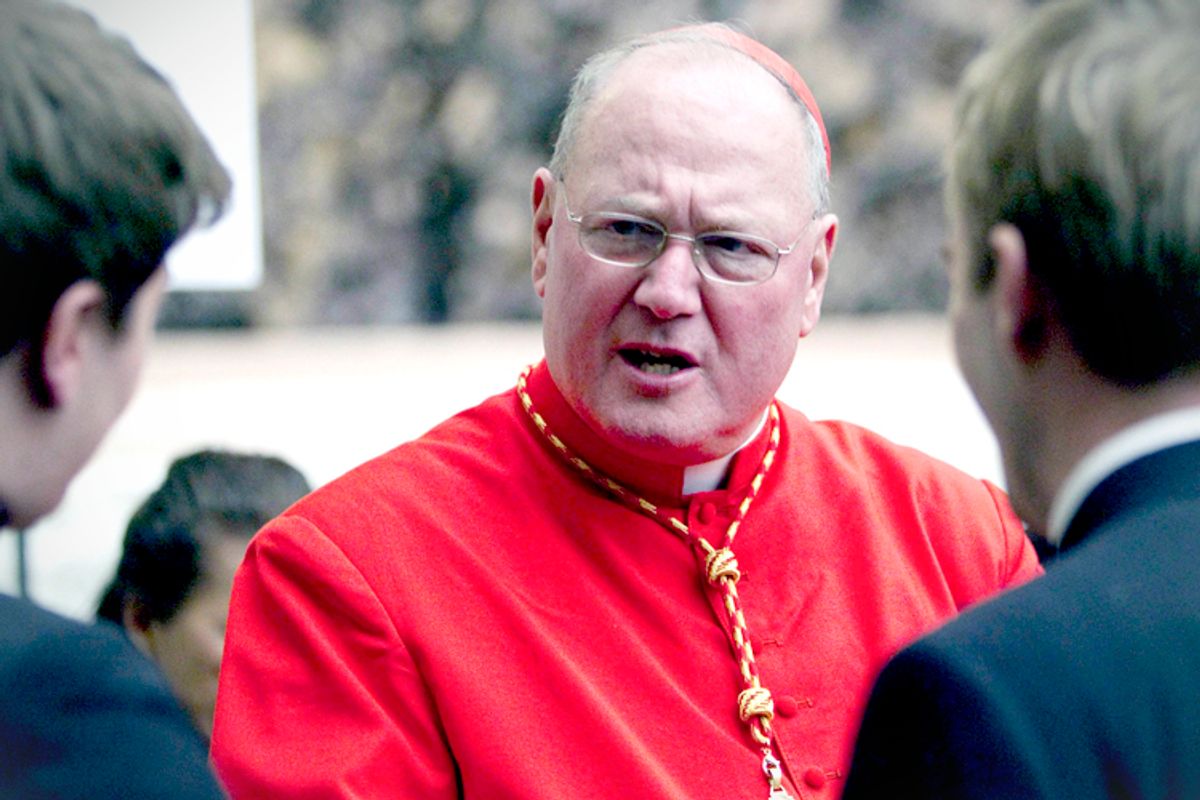 Someday, we may reach the point where there are no more horrific sexual abuses within the Catholic Church to be uncovered, when there will be nothing left to say about the conspiracy of silence and the longstanding policy of protecting child molesters. Today is not that day. Already this week, on two continents, new revelations about how Catholic officials protected abusers and its own financial interests have revealed more about the depth and malevolence of the church's self-interest.

As Reuters reports, 6,000 pages of court documents -- spanning eight decades of cases -- released Monday in Milwaukee "showed in great detail" the ways in which the archdiocese routinely reassigned priests accused of sex abuse to new parishes -- while cleverly protecting millions of dollars of church funds from lawsuits. Included in the documents are requests from Archbishop Timothy Dolan to the Vatican to transfer $57 million to a trust fund to protect it from, in his words, "any legal claim and liability." The transfer was approved a month later. On Monday, Dolan insisted that his request has been misinterpreted, saying the transfer was a "perpetual care fund." The documents also show that Dolan did take action to notify the Vatican of abuses by Reverend John O’Brien – and that it took six years for the man to be stripped of his priesthood. The AP reports that to date the diocese has already spent "$30.5m on litigation, therapy and assistance for victims and other costs related to clergy sex abuse."

But Dolan's shabby track record isn't all the newly released records reveal. They show the personnel files for 42 of the 45 priests "with verified abuse claims against them," including one who is under police investigation now.  The records also show how the diocese moved one priest, Raymond Adamsky, to eleven parishes over 22 after the first time a family accused him of abusing their daughter. And they show how the diocese routinely laicized priests accused of sex abuse, removing them of their duties but still providing them with benefits and sometimes substantial payments. Milwaukee's current Archbishop Jerome Listecki has said that the documents reveal that "22 priests were reassigned to parish work after allegations of abuse," and that "eight of them abused again."

But covering up for child rapists is far from an American specialty. Also on Monday, the Australian press revealed that the Catholic Church there had "extensive knowledge dating back to the 1950s" of sexual abuse by Father Denis McAlinden, abuse that "continued over four decades on children as young as four and five." The Sydney Morning Herald reports that one boy who was abused by McAlinden for four years was told to do penance, "apparently for his sin in being abused," when he reported it to another priest. Internal letters also show local church officials deemed his behavior "not extremely serious," noting, "Fr Mac. has an inclination to interfere (touching only) with young girls, aged perhaps seven to 12 or so... There has never been any physical assault or damage." McAlinden was removed from the priesthood in 1993 and never faced any charges. He died in 2005 while under police investigation. Maitland-Newcastle bishop Bill Wright apologized on Monday, noting that both McAlinden and another abusive priest, James Fletcher, "repeatedly committed acts of sexual abuse against children." And, he added, their acts were "exacerbated on occasion by the failures of church leaders."

Australia has had several notable cases of sex abuse come to light in recent years. In May, archbishop of Sydney George Pell had to acknowledge that church officials "did cover up" other abuses by clergy -- ignoring accusations and destroying incriminating documents. And the new evidence out of the US and Australia are just the latest revelations in an ongoing scandal of global proportions. In 2009, the Dublin Archdiocese Commission issued its report on sex abuse involving "172 named priests and 11 unnamed priests" between 1975 and 2004. And earlier this year, the German Bishops Conference abruptly yanked an independent investigation into seven decades of alleged abuse there.

What is despicable isn't just that these abuses occurred in the first place, or even that in so many cases, church administration knew about the abuse and actively endeavored to cover it up with apparently zero regard for the welfare of victims. It's also that so many of the guys who let this happen remain in positions of authority in the church today. Guys like Cardinal Roger Mahony, who actively worked to "shield abusers from police" in Los Angeles, and Dolan, who seemed to have a far more urgent concern about "the potential for scandal" than actively removing abusers. It's that these men, who were complicit in crimes against children because it conveniently served their employer, the Catholic Church, live in comfort in their positions of leadership. It's that men like Dolan still get to a pulpit from which to pronounce, without any hint of irony, that issues like marriage equality constitute a "tragic" offense to humanity – "especially our children." It's that these creeps are still permitted to have any opinion whatsoever about what's in the interests of "our children."