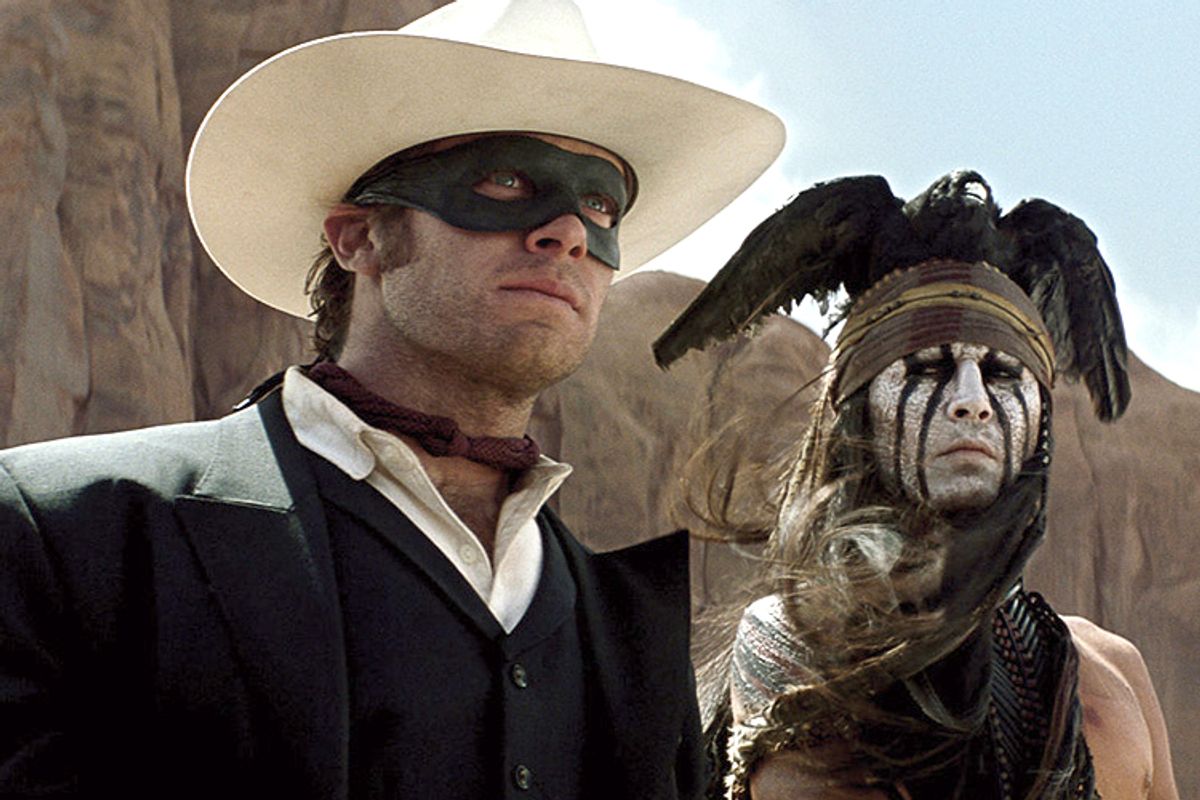 If you’re looking for an old-fashioned, rip-roaring western adventure, with dashing heroes, dastardly villains and beautiful girls, where you know who the good guys and bad guys are and you’re not troubled by historical guilt or contradiction – well, Gore Verbinski’s re-engineering of “The Lone Ranger” is not that movie. Actually, let me take that back, or at least rephrase it: This mordant and ambitious work of pop-political craftsmanship both is and is not that movie. It delivers, for my money, the most exciting action sequence in any of this summer’s big spectacles (even counting the destruction of Tony Stark’s Malibu mansion in “Iron Man 3”), a delirious chase-and-fight number staged on board a moving train – set, of course, to the William Tell Overture – that’s equal parts stunt work, digital effects and cinematic derring-do. But it also never lets you forget that the Manifest Destiny that drove Anglo-American society across our continent was a thin veneer pasted across a series of genocidal crimes.

I can already tell I’m going to be a lonely voice on this one, so let me be clear: “The Lone Ranger” has significant problems, including the pairing of Johnny Depp and Armie Hammer as Tonto and the Lone Ranger, which never pays off the way it’s presumably meant to. Verbinski veers back and forth between hard-hitting, often violent dramatic episodes and the low-key, farcical relationship between his two leads, and the effect can be disorienting. Conventional wisdom has already decreed that this movie is a flop, and so be it – don’t let me stand in the way of some satisfying groupthink. Still, I halfway believe that the discordant qualities of “The Lone Ranger” are intentional – and I know for sure that it’s an ambitious and inventive film that’s always trying to tweak formula and play with audience expectations. If anything, it’s overstuffed with imagination and ideas, and when it comes to Hollywood movies I very much prefer that to the default setting. See it with an open mind, and you may well be surprised.

Let’s back up for a second and consider Verbinski, a director who gets short shrift from critics for reasons that are understandable but maybe unfair. He stayed with the “Pirates of the Caribbean” franchise at least one movie too long – possibly because he was paid kajillions of dollars – and no doubt should create more distance between himself and the empire of producer Jerry Bruckheimer before he ends up directing “Prince of Persia 2: More Sands of Time” or the proposed “Top Gun” sequel. Except, you know what? If Verbinski makes those movies, I’ll go see them eagerly. He’s made some less-than-good pictures, but he’s never made a boring picture, or one that wasn’t constantly trying to wriggle free of its genre conventions and push in unexpected directions. At his best, as in the American remake of “The Ring” or “Rango” or the first “Pirates,” he belongs on the very short list of Hollywood directors who try to apply an auteurist vision of cinema to the most commercial grade of mass-market commodity movies. (See also: Nolan, Christopher, and Snyder, Zack.)

As for “The Lone Ranger,” Verbinski and his credited writers (Justin Haythe of “Snitch” and “Revolutionary Road,” along with the “Pirates” duo of Ted Elliott and Terry Rossio) are trying to do the impossible, or at least the exceptionally difficult: Capture the spirit of an old-timey, square-bear western adventure serial aimed at kids, and also make a dark-hued revisionist western with echoes of “The Searchers,” “Ride the High Country” and “Unforgiven.” While the depredations of the railroad barons serve as a plot point in many films and novels, this story specifically recalls the themes and plot of Frank Norris’ tremendous 1901 California novel “The Octopus” (which may also have helped inspire "There Will Be Blood"). Add to that the movie’s most headline-making aspect, the casting of Depp in what amounts to a lead role as perhaps the most iconic and troubling of all “good Indian” characters, a Comanche outcast who for reasons of his own rides alongside a masked white avenger.

It remains problematic, to be sure, to see a white movie star (whatever you think about Depp’s purported Cherokee great-grandmother) playing a 19th-century Native American in a crow headdress and black-and-white face paint, delivering broken-English witticisms. But you can’t claim that Depp (one of the movie’s producers) and Verbinski haven’t thought about the problems. Tonto is given a traumatic and complicated back story, an agency and a painful destiny that have never existed before in any “Lone Ranger” iteration, and his isolation from both his own people and the white world makes sense in a new way.

Quite a few Native American actors appear in the film as Comanche warriors, who are presented with tragic dignity. If anything, these episodes in the film go in such a brooding and serious direction that some viewers may have trouble adjusting. Already consigned to a few hundred square miles in west Texas, the Comanche are betrayed by unctuous railroad tycoon Cole (a fine, slithery role for English actor Tom Wilkinson) and attacked by the U.S. Army – which believes, incorrectly, that the Natives have violated the treaty and raided ranches on the “white” side of the river. As Chief Big Bear (Saginaw Grant) tells the Lone Ranger when he falls into Comanche hands, they know full well how the coming war with the whites will end: “We are already ghosts.”

Whether Depp’s Tonto is a genuine Native shaman or a con man thriving on white gullibility is left up to the viewer, but either way Tonto is the driving force that transforms Hammer’s John Reid, a stick-up-the-butt, Eastern-educated lawyer, into the white-hatted, gun-totin’ and perhaps literally undead Lone Ranger. In a framing device that definitely pushes the outer boundaries of the grotesque but nearly broke my heart, an aging Tonto – working in a traveling Wild West show in the 1930s – tells the whole story to a small boy in San Francisco who shows up in a Lone Ranger costume.

Reid just isn’t a very interesting character, unfortunately, and the screwball-comedy episodes of “The Lone Ranger,” when he and Tonto squabble like a mismatched rom-com couple, range from mildly amusing to profoundly irritating. But for the most part Verbinski handles this film’s wild shifts in tone – a specialty of his work, from the Brad Pitt-Julia Roberts thriller “The Mexican” onward – with aplomb. Even the film’s apparent villain, a disfigured and sadistic outlaw named Butch Cavendish (played by the brilliant William Fichtner), is not who he appears to be. Killers like Butch only draw our attention away from the real criminals, who wear nicer clothes and don’t get their hands dirty. Tonto has apparently spent his life believing he’s hunting the Wendigo, a cannibalistic or demonic entity from Native American folklore, but as he tells the real villain near the end of the story, he no longer believes in those stories: “Now I see that you’re just another white man.”