From the Berlin Wall to Cairo, we live in an era of anti-authoritarian revolution that may transform the world 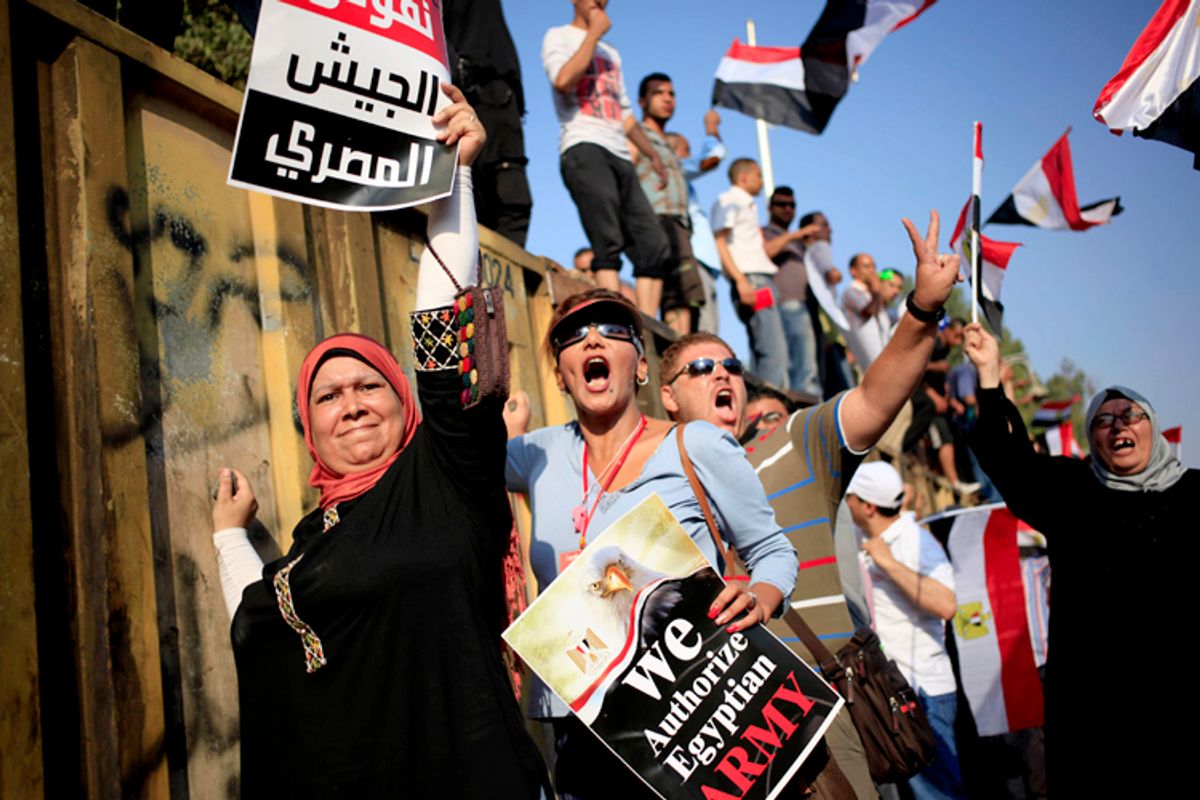 Whatever you make of the extraordinary turn of events in Egypt over the past week, it makes clear how much and how rapidly the world is changing. If you were ever worried you didn’t live in interesting times, you can quit worrying now. I’m not sure it’s useful or even possible for Americans or Westerners to reach a thumbs-up or thumbs-down verdict on version 2.0 of the Egyptian revolution at this point. It’s a dynamic and chaotic situation that’s changing hour by hour, and one that exposes how limited America’s influence has become in that region. I’ve read reasonable-sounding debates about it, as well as angry Twitter wars. I’ve encountered compelling arguments from prominent Middle Eastern leftists that it was necessary to remove Mohammed Morsi and the Muslim Brotherhood from power, even by force, as well as policy-wonk treatises about how sabotaging a nascent if imperfect democracy at this stage can only lead to violence and tyranny.

But if you can separate the populist and/or military coup against Morsi’s government from short-term political or ideological questions, it fits into a much larger historical pattern that is global in scale. We live in an age of revolution, and specifically of anti-elite, anti-authoritarian revolution. It's an age that began in earnest with the fall of the Berlin Wall in 1989 and shows no signs of slowing down. Edward Snowden, who on Friday was reportedly offered asylum by both Nicaragua and Venezuela, is in his own way a soldier in that revolution, one who has exposed the secrets of the world’s greatest imperial power and made it look both foolish and vulnerable. That’s the thread that connects this week’s explosive news out of Egypt to the bizarre episode of the Bolivian president’s airplane, which was forced to land in Vienna (almost certainly at the behest of someone in Washington), based on false rumors that Snowden might be on board. Screw national sovereignty – the most powerful nation on earth is hunting a computer nerd! In other words, both these things are driving powerful people crazy.

Indeed, historians of the future – assuming there are any – may well compare our era to the great wave of social and political revolutions that transformed Europe in the middle of the 19th century, and ultimately led to the sweeping away of the old aristocratic order. What the conclusion of our current revolutionary wave will look like, and whether it will sound the death knell for the dominant liberal-capitalist world order, I have no idea. But I feel certain that a lot of people in boardrooms, executive suites and presidential palaces are wondering the same thing.

On one level this seems obvious: Look not just at the unprecedented street revolution in Egypt, but the mass protests in Brazil and Turkey over the past few weeks, along with similar recent rumblings of revolutionary discord in Greece, Italy, Spain, France, almost every nation in the Arab world and other places I’m not remembering. But this revolutionary moment is difficult to grasp in conceptual terms, partly because it’s not defined by any clear political consensus, the way the 19th-century revolutions were. (In that case, it was the worldwide movement toward democracy, either in its “bourgeois” or social-democratic form.) It’s more defined by what it’s against: Ordinary people around the world who may not agree about anything else are united in their dislike and distrust of the ruling political and financial elites, and are taking it to the streets.

It’s especially tough to see this age of revolution from inside the relative social tranquility of the United States, where we remain largely cut off from the rest of the world and relentlessly bombarded with propaganda about how we live in the greatest country that has ever been or could ever be. That tranquility is itself a kind of “Matrix”-like illusion, I would argue, that masks conditions of worsening inequality and instability, not to mention our creeping awareness that the rest of the world doesn’t adore us quite as much as we like to believe.

Most mainstream media commentary on the Egyptian crisis has defined this history-shaping moment as an Arab-specific event peculiar to one nation, or reduced it to a series of strategic or political micro-questions: Is it good for America? Is it good for Israel? Is it good for “democracy,” whatever that means? (And then there’s David Brooks, announcing with his usual Ivy League grace that Muslims in general and Egyptians in particular cannot be trusted with governing themselves.) I don’t know the answers, but I know that the questions are being asked from inside an outdated “new world order” paradigm in which the American model of liberal democracy and class-divided consumer capitalism is assumed to be the universally desirable end point of human history.

This revolutionary era is not just a matter of the last year or two, or drawing fanciful connections between the Arab Spring, the European left and Occupy Wall Street. It’s been building for more than a quarter-century. We were also assured, in America, that the popular uprisings that brought down the Berlin Wall and Soviet Communism between 1989 and 1993 represented Ronald Reagan’s personal victory over the Evil Empire, or – to put Francis Fukuyama’s intellectual gloss on it – that the triumph of capitalism marked “the end of history.” Violence and social discord lay in the past, amid the campus unrest and political assassinations of the 1960s and ‘70s. The future was a placid landscape of universal affluence, Big Macs and big-screen TVs, and no two countries that had McDonald’s – remember that Thomas Friedman theory? – would ever fight a war. (The conflict between Russia and Georgia, circa 2008, finally put that one to rest.)

Well, history had not ended, as Americans would discover in September 2001, and what happened in Berlin and Prague and Moscow at the end of the Cold War now look more like early explosions in an ongoing chain reaction. The 20-odd-year history of populist revolt that reaches from the Brandenburg Gate to Tahrir Square includes all sorts of insurgent movements that appear historically disconnected and even antagonistic. I know it sounds incendiary to say that the “anti-globalization” radical left of Seattle in 1999 and Genoa in 2001 paralleled the rise of al-Qaida and the Taliban in the Muslim world, and I don't mean that their tactics or goals were in any way similar. (Although demonized as scary anarchists in the mainstream press, even the "black bloc" protesters of that period were primarily nonviolent.) But both were outsider movements that rejected the social consensus, and sought instability and confrontation rather than dialogue or political engagement.

A couple of years later, after 9/11, the worldwide antiwar movement of the early 2000s organized some of the largest street demonstrations in history, although they did not stop the U.S. from invading Iraq and Afghanistan. Countless millions of American taxpayer dollars and who knows how many secret CIA campaigns had gone into stamping out the social-democratic or socialist left in Latin America, but sparked by the confrontational Hugo Chávez in Venezuela, it roared back to life across the continent. More recently we have seen the technological resistance symbolized by Snowden, Bradley Manning and Julian Assange, the anti-austerity movements sweeping back and forth across Europe and the diverse coalitions of the Arab Spring, which spread explosive confrontations between masses and entrenched elites from one country after another. You could certainly trace the prehistory of these movements well before 1989, to the Iranian revolution – which introduced the disorienting third force of Islamic fundamentalism onto the world stage – or the various strands of European anarchism. But let’s save that for someone’s doctoral dissertation.

In the isolated and peculiar context of America, I’d throw in Barack Obama’s 2008 campaign. As painful and ironic as this may sound today, many people understood that at the time as a revolution aimed at breaking up the bipartisan stalemate of Washington politics. Viewed historically, I would suggest that Occupy Wall Street and the Tea Party were activist responses, from opposite ends of the ideological spectrum, to the contradictions involved in Obama’s election and its aftermath. I may personally find one of those movements (mostly) inspiring and the other one mostly idiotic, but that’s not the point. Both claimed to represent an angry silent majority but had trouble attracting mass support amid a climate of general cynicism and apathy, and both had a moment of success when they channeled the profound public mistrust of financial and political elites.

Only the world’s most committed nihilist could approve of all those movements, which wouldn’t even all agree that their aim was democracy, or at least not the version of it practiced in the U.S. and other major Western nations. They have nothing in common except that shared mistrust of imperial power, and a thoroughgoing rejection of the neoliberal capitalist consensus that has governed the world for the past 24 years. That’s exactly where the immense opportunity and danger of this revolutionary age lies. Watching the people of a major nation take to the streets and overthrow a hated government for the second time in three years suggests that "another world is possible," as the activist slogan holds, but also that we have no idea what it will look like or what degree of chaos might be involved in getting there.

In a world where socialism and other utopian social ideals have been discredited, there is no longer much sense of a shared positive vision. But there's a shared negative vision: I suspect that most people around the world, whomever they vote for and whatever else they believe, see those Cairo crowds and get it. They share that instinctive mistrust of bankers, politicians, spooks and big shots; as in Spike Lee's "Malcolm X" (one of the greatest of all films about American politics), they're sick of being hoodwinked, bamboozled, led astray and run amok. What they'll do about it, and when, is another question.

Now, especially here at home you can still convince some people that Edward Snowden is a dangerous traitor, or that a few guys with rocket launchers in Yemen are so dangerous as to justify sending robots to blow up entire villages, or that by spying on all of us all the time the NSA has stopped “dozens” of terrorist attacks. (Our government still has no idea what to say about Egypt.) No doubt there are people out there who think that the world financial system works for the betterment of all, though that falls under the category of "there's a sucker born every minute" (which P.T. Barnum didn't actually say). There were also people who still believed in the divine right of kings after 1848, and who clung to their faith in the Leninist vanguard party after 1991. To quote a famous revolutionary of another era, the current world system is a paper tiger, which looks ferocious but might melt in a storm. Those who run it are running scared.