My family's decade in genetic limbo

For a magazine story, I had my DNA decoded alongside my daughter. Little did I realize how harrowing it would be 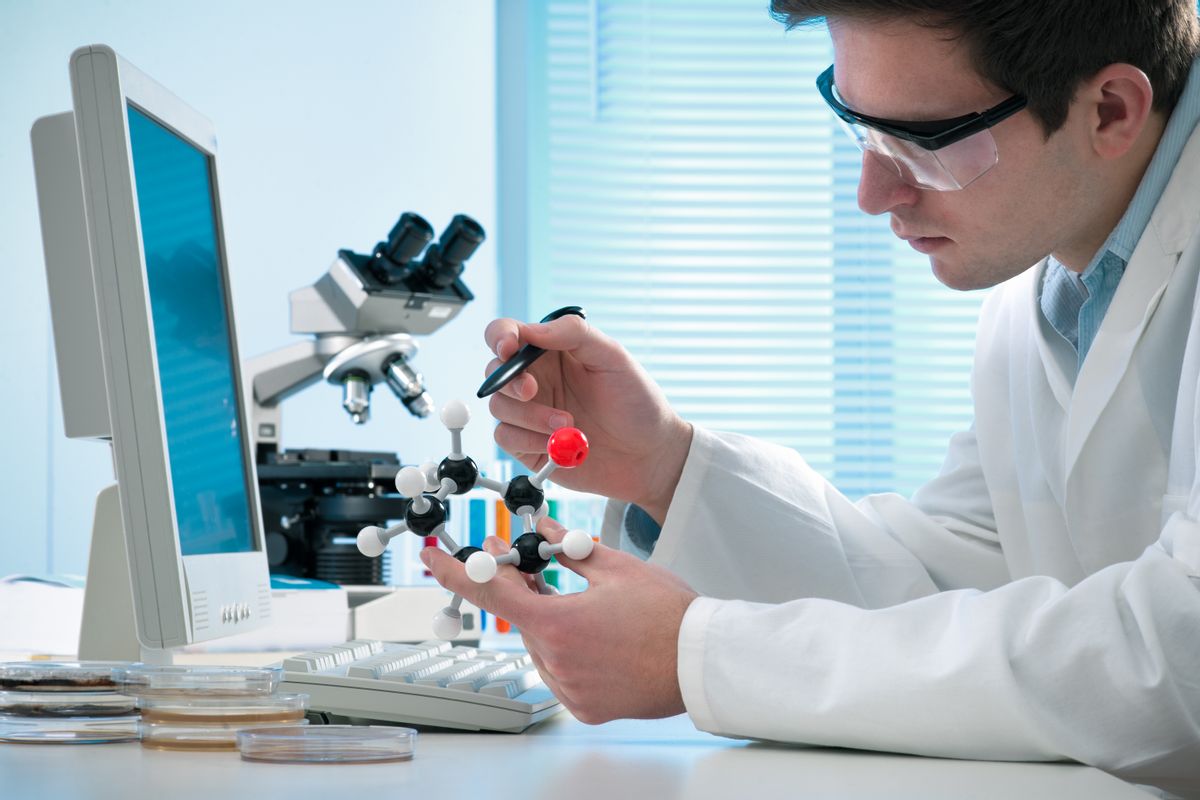 In 2008, my 19-year-old daughter, Danielle, took the same type of DNA test for breast and ovarian cancer that actress Angelina Jolie took recently.

Jolie, 38, came out positive and opted for a preventive double mastectomy to dramatically reduce her risk of breast cancer, a too-often-lethal disease. She based her decision on a telltale pattern of mutations in the BRCA1 gene and a family history of breast cancer that claimed her aunt at age 61 and ovarian cancer that took her mother’s life at 56.

The actress was told she had an 87 percent chance of developing breast cancer and a 50 percent chance of getting ovarian cancer, because of her particularly potent combination of family-illness history and genetics. This risk assessment, however, offered a level of genetic certainty for Jolie that is regrettably rare for most healthy people wanting to know if they have an elevated predisposition for a common disease like breast cancer. Only a few thousand breast-cancer patients in the United States share Jolie’s specific genetic mutations. The rest of the more than 230,000 cases annually diagnosed nationwide are caused by different genes or by other factors that cannot be as accurately predicted.

Danielle was tested for this unusual genetic signature in BRCA1 as part of a project I initiated over a decade ago as a journalist writing about genetics. At the time the $3 billion Human Genome Project was nearing completion, and hype about how the science of genomics would revolutionize medicine, allowing researchers to tailor drugs to specific diseases, made headlines. Pharmaceutical and biotech companies dreamed of big profits in personalized medicine, and ethicists worried about how people would react to their prospective risks to diseases and face the sort of difficult choices that Jolie did.

To better understand the complexities of DNA and wanting to humanize what could be eye-glazing science for non-geneticists, I had sections of my own DNA decoded first for a story published in Wired in 2002, and later for other stories and a book. My personal DNA odyssey culminated in 2011 when I got the entirety of my genome sequenced―all six billion As, Ts, Cs and Gs. The idea was to see what this information could tell a healthy person about his or her future. My daughter, who seems to suffer from the same curiosity gene―as yet unidentified―as I do, insisted that she be tested alongside my parents and me as part of what became a family exploration to investigate three generations of one family’s genetics.

As a father, I didn’t like this idea at all. Testing myself and my parents, was one thing. They were in their late 70s and quite healthy, as I was in my 40s. This suggested that we didn’t have anything dreadful in our DNA. But my daughter was a different case. Our family has a history of breast and ovarian cancers. My paternal grandmother survived breast cancer in her 50s and died of ovarian cancer at 86. I also knew from my previous testing that I am a carrier of gene markers other than BRCA1 that are associated with breast and ovarian cancers, as is my father, even though as males we had no risk of getting ovarian cancer, and a very low risk for breast cancer.

What if we found something amiss in Danielle’s genome, especially something we could do nothing about? It’s bad enough to discover that you have a high chance of developing a disease without a cure, like Alzheimer’s, when you’ve had a long life behind you. It’s quite another to receive information that casts a shadow over your future when you’re young.

Another fear was that we would find out something that required us to make a difficult decision. Jolie faced the wrenching choice of either living with an 87 percent certainty of getting breast cancer in the future or removing her healthy breasts now. We were all anxious about the possibility of having to choose to pay a terrible price if we found out Danielle was at high risk for getting cancer or another serious disease.

I held my breath and ordered a scan of hundreds of thousands of Danielle’s genetic markers through a DNA testing company based in Iceland called deCODE Genetics—which has since ceased offering this service. In addition, I ordered from Utah-based Myriad Genetics an earlier version of the BRCA1 test that was later taken by Jolie.

Thankfully, my daughter’s results on the Myriad test were negative, although this ruled out only one rare possibility that she might get these dreadful diseases. Later, Danielle did test positive for other DNA markers implicated in breast and ovarian cancers―markers associated with several gene mutations that can contribute to a person’s disease risks and chances for survival.

So much attention is given to the BRCA1 gene that few people realize there are other genes that might contribute to a person’s predisposition for breast cancer. Markers in genes with names like NEK10 and TOX3, for instance, are associated with a small additional risk―12 and 11 percent, respectively. Danielle’s increased risk for ovarian cancer was equally small, only 13 percent, thanks to a marker that is located outside of a gene found on chromosome 9 (much of your DNA is composed of long strings of nucleotides that are not part of a gene).

According to the 2009 study that discovered the association between the chromosome 9 marker and the risk for ovarian cancer, on average 14 out of 1,000 women of European ancestry will get ovarian cancer, while 16 out of 1,000 Caucasian women (14 percent more) with my daughter’s genetic signature will get the disease.

It was a relief to know that my daughter’s scores suggest a significantly lower risk for breast or ovarian cancer than Jolie’s results. Danielle is also four generations removed from relatives with those diseases, further lessening her risk factors. Yet this doesn’t mean she is safe. She could still get them from as-yet-unidentified genes or from other factors, such as exposure to carcinogens in the environment―or not. This uncertainty also applies to other diseases she has an increased risk of developing, such as gout (19 percent) and abdominal aortic aneurism (9 percent). I share her risk for these two conditions, as does my father.

This genetic ambiguity for my family comes a decade after the completion of the Human Genome Project in 2003. For most healthy people, genomics has not yet proven to be a crystal ball to determine one’s risks for developing major ailments like heart disease, diabetes, and depression. Nor did DNA testing create the rafts of personalized therapies that researchers hoped would emerge over the past 10 years. “We believed that genetics would tell us a great deal about common diseases,” said geneticist Charles Cantor, a leader in the Human Genome Project who is now the Chief Scientific Officer at San Diego-based Sequenom, the genetic testing company that ran my first genetic tests in 2001. “But to our disappointment, the impact of these genes has been very small in most cases.”

I have firsthand experience with this, having been tested over the years for nearly 30,000 genetic markers for hundreds of diseases and traits. (My full genetic profile can be viewed here.) For example, way back in 2001, I tested positive for a version of a marker in the ACE gene that’s linked to an increased risk for hypertension. At the time, my blood pressure was normal. A dozen years later it is borderline high and might require medication if it keeps going up. But was this really predicted by the ACE marker? Or was I fated anyway, like many men entering their 50s, to have my blood pressure climb as I grow older—suggesting that age is a more potent risk factor for this disease than a mutation in my ACE gene?

Genetics has been much more useful for determining and understanding rare diseases that are clearly caused by glitches in a person’s DNA. This includes the rare mutations found on Angelina Jolie’s BRCA1 gene. Other diseases with obvious genetic causes and effects include Tay Sachs and Down’s Syndrome. For more common diseases, however, that impact millions of people, the predictive power has been less decisive, offering only tiny upticks in risk like my daughter’s 13 percent or 19 percent. This comes as scientists are better understanding that factors such as age or inputs from the environment (toxins, sunlight, eating too many Big Macs) are often more influential than genes in determining who will get cancer, diabetes, and, yes, hypertension. Researchers also have been studying the impact of multiple genes that work together in pathways and systems to cause or prevent diseases—something called “complex systems biology.”

Recently, geneticists’ ability to understand complicated patterns in genes have been bolstered by the dramatic decrease in costs for sequencing the entire genome of a person, as opposed to past technologies that tested only a small fraction of our DNA. (Think of looking for a needle in only part of a haystack instead of the whole thing). Just a few years ago a full genome cost millions of dollars. Now one costs under $5,000, and may soon be under $1000. This promises to lead to far more accurate and useful genetic profiles for individuals. Already full genomes are helping physicians diagnose sick patients whose diseases are unknown and therefore difficult to treat. “A child presents with a mysterious syndrome of symptoms, and genetics is beginning to be able to tell us what it is,” said Harvard geneticist and physician Robert Green.

Physicians have also been successful in using full genomes to sequence the DNA of tumors in cancer patients to find out what genetic changes have occurred to cause healthy cells to grow out of control. These include epigenetic changes where a person’s DNA signatures in some cells are rewritten after exposure to environmental inputs such as chemical toxins. “This can help us home in on what [cancer] drugs to use,” said David Agus, an oncologist at the University of Southern California.

For now, my family waits in limbo between genetics’ early promise and a future when more people will get results that matter, like Jolie did. I fully expect this to happen, and anticipate the day when genomics and other tests for everything from the proteins circulating in our blood to the microbes in our guts will provide useful information. Some of this will be good news, although the price for certitude might also offer us stark choices—like Jolie or worse, no choices at all.

My daughter, now 24 years old, has promised me she will check regularly for lumps in her breasts.

David Ewing Duncan is an award-winning science journalist and the author of Experimental Man: What one man’s body reveals about his health, your future, and our toxic world.