The NYT acts like it's Mom's responsibility to do it all. Why does the paper keep getting family life so wrong? 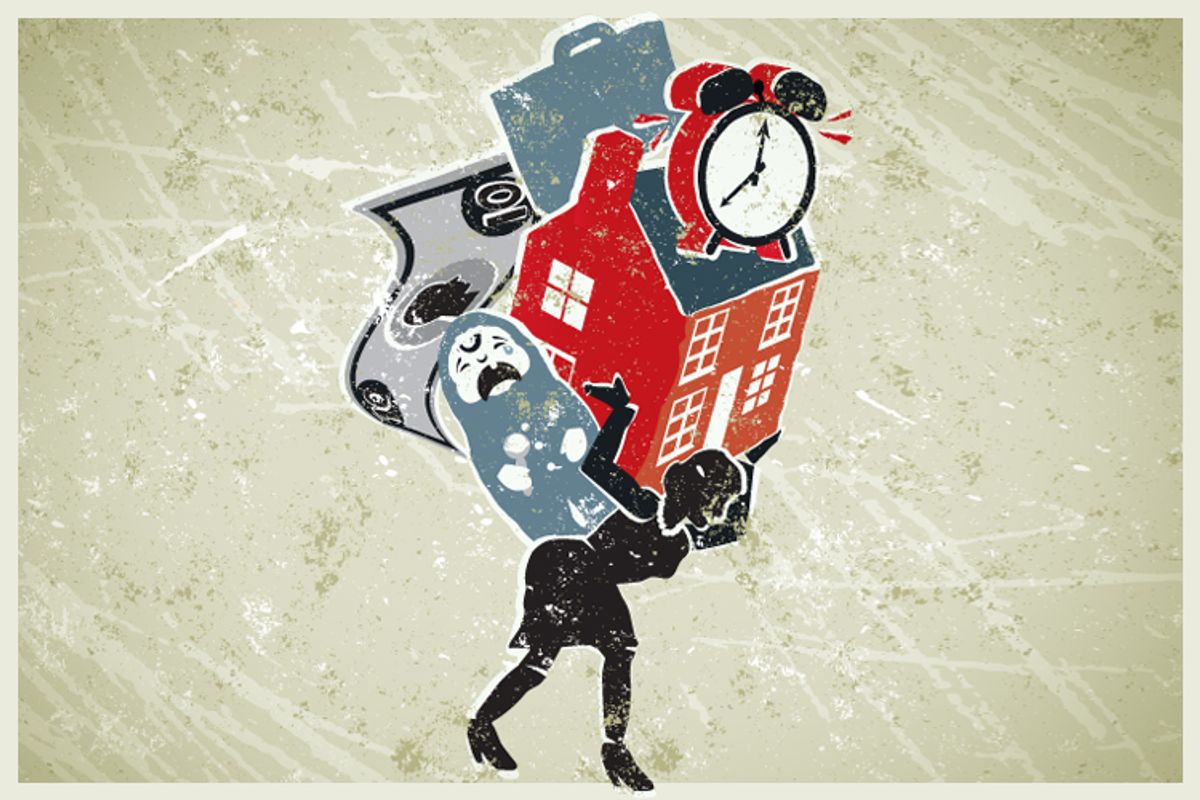 Today in Problems You Probably Wouldn't Have If You Had a Penis: I offer you yet another in the New York Times' series of dippy-ass think pieces on women, motherhood and work. But first, I suggest you pour yourself a drink. Or, if you're a man, get a woman to pour one for you.

The Times has of late been particularly awash in bogglement at this whole ladies-having-jobs thing. You may recall that last month, the paper anxiously reported that "women’s gains on the economic front may be contributing to a decline in the formation and stability of marriages."

Now, in a story with the says-it-all title, "Coveting Not a Corner Office, but Time at Home," writer Catherine Rampell presents the issue of work-life balance as a challenge that women face while men watch from the sidelines. Here's the condensed version: Ambition, meh, more time for making pudding and Oreo crumble, yay!

The piece kicks off with a portrait of Sara Uttech, an agricultural association executive who "finds climbing a career ladder less of a concern than finding a position that offers paid sick leave, flexible scheduling or even the opportunity to work fewer hours." The Times then helpfully describes the plight of working mothers by saying, "The ultimate luxury for some of them, in fact (though not for Ms. Uttech), would be the option to be a stay-at-home mother. 'I never miss a baseball game,' said Ms. Uttech, uttering a statement that is a fantasy for millions of working mothers (and fathers) nationwide." Later in the story, the Times visits Uttech's book club and notes the "support and guidance" she gets "from the Book Nuggets (and her husband)," and offers Uttech's advice to "other working mothers — and fathers, too" because "most women (and men) don’t feel as if they have enough leverage to ask for accommodations." Aaaaand, we're off. The luxuriant fantasy of staying at home is presented as ideal, even if it doesn't apply to woman actually being spoken of. Because work flexibility is a lady problem and staying at home is the best solution! And husbands and fathers -- they are but a parenthetical, maybe an em dash. Or as The New Yorker's Emily Nussbaum quipped Monday, "ghostly bystanders in their children's lives."

But wait, it goes on. The "trim, chipper" Ms. Uttech, whose husband's construction business has taken a hit in the past few years, "doesn’t have access to nannies, in-office nurseries, personal assistants or drivers, so she has had to be resourceful." She persuaded her school to start an affordable after-school program. She rises before 6 a.m. to do laundry and pack lunches, "wielding the hair dryer in one hand and a son’s permission slip in the other." She prepares most of the family meals on Sunday, "making great use of two wonders of modern cookery: the slow cooker and the freezer." Eventually, roughly halfway through the article, Uttech "emphasizes that she gets a lot of help: from her husband, Michael, who picks the boys up from their after-school program, and spends many evenings coaching their sports teams." I swear to God, I can't even. But here's a helpful household hint: You don't need a vagina to operate the wonders of modern cookery. The story also introduces us to Ellen Bergfeld, who does not have children but "boldly left in the middle of a board meeting" when "her very first puppy litter was about to be born earlier than expected, and her 'city boy' husband at home 'couldn’t deal.'"

The Times is not unique in its knee-jerky assumptions about family dynamics, of course. They are perpetuated by concern trolling cable news pundits, and they are perpetuated out in the real world in our real lives, every day. I have yet in my parenting life to make social plans with other mothers without suffering through a long email chain of women apologetically figuring when their husbands can "let" them get out. And when I was a keynote speaker at an event last month, a high point in my professional career, you know what my table mates wanted to know? If my children were home being "baby-sat" by their father.

But these daily soul killers don't have to be the main story that is covered in the press. Just this spring, the writer of the Times piece wrote a feature describing herself as "an educated young woman who loves her job" and advocating for the economic benefits of paid paternity leave. Let's see more of that. Even then, why the inordinate focus on educated, heterosexually partnered women? Does the Times truly exist in such a narcissistic bubble that it finds it extraordinary that a family might not employ "nannies, in-office nurseries, personal assistants or drivers?" And as Rebecca Traister asked Monday, "Imagine a scene where dad drying his hair & signing a form at the same time is evidence that he doesn't want/can't handle a corner office." Or, as one working dad added on Twitter, "This makes me stabby."

In case you're wondering, the default setting for men with children is not "helper" or "baby sitter." What a man does with and for his family is known as "parenting" -- and even "fathering." Those are not little sideline preoccupations for a whole lot of them. To suggest so says that even now, women are somehow the real parents in the family; men are the chauffeurs and coaches. It's insulting to both sexes. Nor is it a "lean in" moment when, of all the stories in the world about men and women and work the Times could choose to tell, it opts for an anecdote about a woman who drops everything in the middle of a board meeting because her husband can't "deal" with something at home. And though the Times unquestioningly presents the narrative of a woman who "has to be resourceful" about child and home care as if those responsibilities are naturally hers alone, the important truth is that these issues are not and should not be strictly women's to bear -- and certainly not by getting up before dawn to do laundry or spending Sundays slaving over a Crock-Pot.