From blue wig to offensive Obama tweets, the star has become a sideshow -- but there's no pleasure in watching her 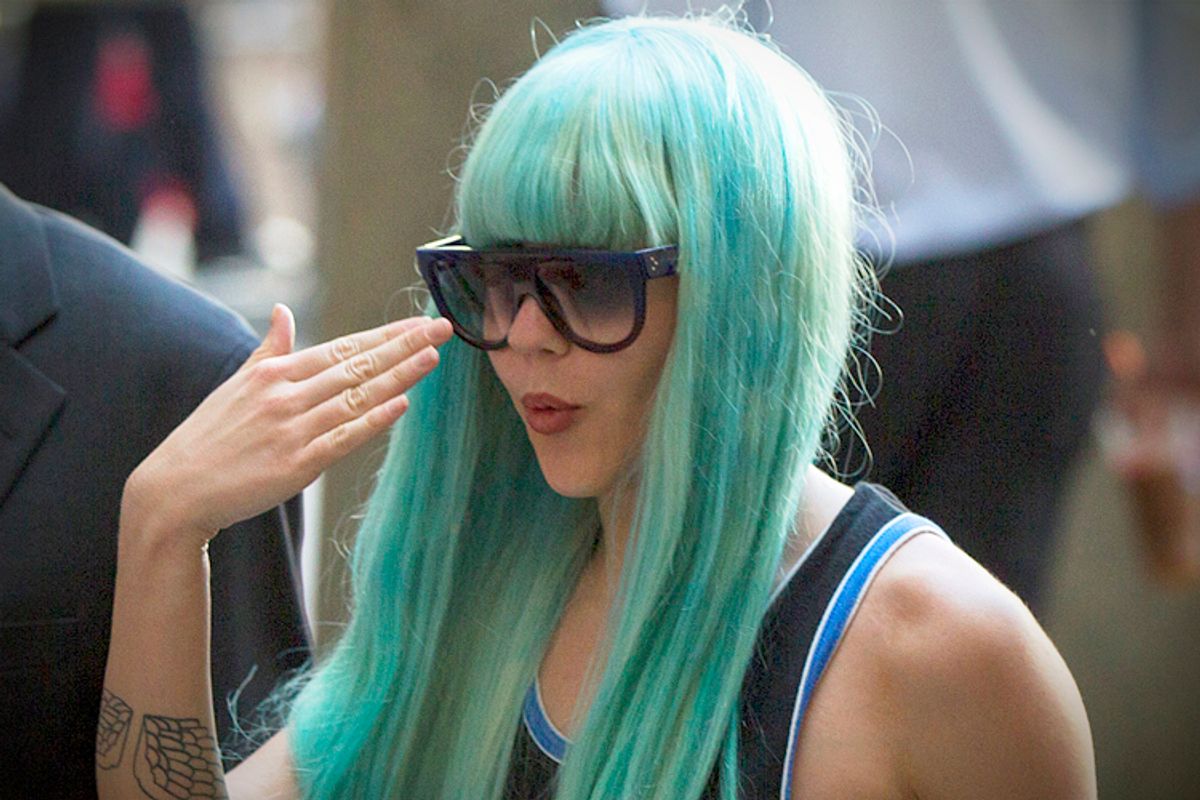 There comes a certain point, when you're driving past a car wreck, that you realize what you're looking at is a car wreck. As you inch closer to the disaster, the damage reveals itself for inspection. At that moment, it ceases to be a mere curiosity in the road; it becomes a sad reality. And when that moment hits, it doesn't matter that it's out there on the turnpike for anybody to see -- you feel like an intruder on a very private moment of suffering. Amanda Bynes is a car wreck. And I just don't want to look anymore.

By now, the narrative of Bynes' descent from perky teen star to shambling nightmare has been well documented in a near daily stream of news stories. The narrative kicked off in earnest in March of 2012, when she was pulled over for talking on her cellphone while driving and allegedly fled the scene. A month later, she was arrested for a DUI, and pleaded to Barack Obama to "Please fire the cop who arrested me." In August, she got in another fender bender, and in September she was caught still driving around with a suspended license. Then in May, she allegedly tossed a bong from the 36th floor of a Manhattan building, though she defensively claims, "It was just a vase." And that's just her legal woes.

She's also been steadily unleashing a steady torrent of bizarre messages and behavior. For her Tuesday New York City court appearance, for instance, she donned an aquamarine blue wig and "smirked and talked to herself" during the proceedings. She's previously shown up in a matted blond wig that resembled something from the bottom of a preschooler's costume box. Even just walking down the street, she's erratic, twitching and moving to her own apparent internal music. The 27-year-old has stated her intended "long and wonderful career as a singer/rapper," as well as, repeatedly, her plans to weigh a scant 100 pounds. (She recently deviated from her habit of posting grim selfies to reveal the number on her scale, a wispy, triumphant 107.2.) Over the weekend, she announced on Twitter that she'd recently had a nose job, because "My dad is as ugly as RuPaul!" and because "I Love Plastic Surgery."

And it's there, in her Twitter stream, that the best picture of the peculiarity of Amanda Bynes can be best viewed. A few days ago she called the Obamas "ugly," a distinction she's previously given to Miley Cyrus, Zac Efron and Rihanna, among others. This week she also threatened to sue Complex magazine, adding it to a list of her intended lawsuit recipients that includes the NYPD, as well as "any site/magazine that shares" an image of her she claims has been "morphed" and "Every Magazine Lying About Me." And of course, she has continued her obsessive tweeting about Drake.

Along the way, Bynes has become an easy if uncomfortable punch line. Her Twitter feed is crammed full of replies mocking her. David Spade has cracked about her "great boobs." Kathy Griffith has joked that her current life "sounds like a dream," while adding the caveat that "she seems to be legitimately troubled." Here in New York, her antics reliably sell copies of the Daily News and the Post. And this week Hollywood Life posted a photo of her in her blue wig and asked, "Love it or loathe it?" as if a bizarre getup for one's court date is somehow worthy of a fashion critique. No less an expert than Snooki, meanwhile, has helpfully surmised that Bynes should get a reality show because "she's entertaining" and "my guilty pleasure on Twitter." Bynes has nearly 3 million Twitter followers. Snooki's clearly not the only one enjoying the show.

But the last thing I'd call watching someone deliberately wasting down to a hundred pounds and dancing erratically down the street and endangering herself and others by driving around with a suspended license and posting really, really incoherent things on the Internet is entertaining. I see people like that all the time on the A train, but because they weren't in "Hairspray," most of us just try to avoid eye contact. And we have entered a very weird age of celebrity watching when Dr. Drew, of all people, emerges as the voice of reason and compassion when he says, "It may be time to leave @AmandaBynes alone … if she needs help, hopefully she'll get help one day before something bad happens."

This isn't a piece of performance art when Bynes writes, "I Want A Million Dollars A Year For Illegally Having My Mind Read And Privacy Stolen." It's disturbing. Back in April, Bynes reposted  a tweet about hope for "everyone who self harms, is suicidal, depressed, has anxiety, is unhappy…" Somewhere under the wigs and the face piercings and the angry, strange tweets, there's a real 27-year-old girl who just a few years ago had talent and a promising career and what looked like a genuine smile on her face and a spark of light in her eyes. There's a human being. Whatever it is she's going through is not some roadside attraction. It's a roadside disaster. And if we can't help her, why should we be staring at her?