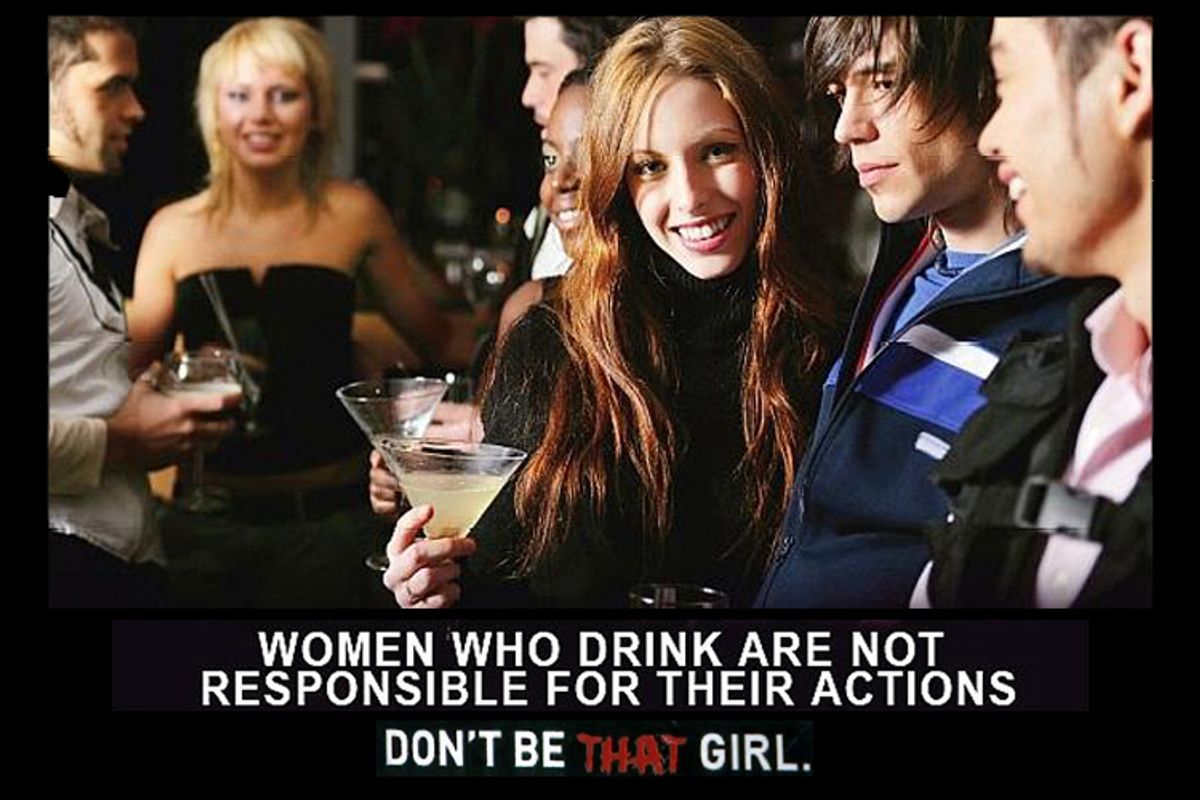 Here's one thing you can always count on: Whenever any group makes any kind of progress or even protest in the name of enlightenment and justice, some gaggle of crackpots will be right there to complain about the horrible unfairness of it. This is how we wind up with fake wars on Christians and wars on marriage and, of course, wars on men. That's why, as predictable as it is gross, a group called Men's Right's Edmonton has come up with a response to a recent successful rape awareness campaign.

Three years ago, Sexual Assault Voices of Edmonton launched "Don't Be That Guy" with a series of posters and images to take aim at some disturbing pervasive attitudes about sexual assault. As they explain, "Studies involving 18-25 year old men revealed that 48 per cent of the men did not consider it rape if a woman is too drunk to know what is going on." And as the Halifax police say, the time has come to stop putting the entire responsibility for preventing sexual assault on potential victims -- "We must also target our messaging to the people who are committing these crimes" because "targeting the behavior of victims is not only ineffective, but also contributes to and increases self-blame."

The campaign's messages are clear: that "It's not sex when she doesn’t want it" and "Just because she can't say no doesn't mean she's saying yes." And the campaign doesn't just address sexual assaults of women – one ad, showing two men, says, "It's not sex if he changes his mind." The kicker is simple. Don't be that guy. And what do you know? In the wake of the campaign, in 2011, the sexual assault rate in Vancouver dropped by a stunning 10 percent – the first dip in several years.

But this whole not blaming victims and educating men regarding consent thing has not sat well with everybody. Men's Rights Edmonton has countered with its own campaign, telling women, "Don’t Be That Girl." Crudely ripping off the imagery of the original campaign, its posters, which have been cropping up in Edmonton, warn, "Just because you regret a one night stand doesn't mean it wasn't consensual," "Just because you regret your life choices, doesn’t mean it’s rape" and "Women who drink are not responsible for their actions especially when sex is involved." And they remind, "Lying about sexual assault = a crime."

Lise Gotell, a University of Alberta professor who worked on the original campaign, told the Province this week that "What’s been done to transform an anti-sexual-assault campaign into a rape-apologist campaign is just deeply offensive." And she added, "What these posters are going to do, when people see them, is play into this myth that there's a huge problem with false allegations, which we know empirically is wrong. They may in fact discourage people from reporting, because the research also shows that women are very likely to minimize their experiences of sexual assault ... The tactics are cowardly and the issue is not a laughing matter." And Kristopher Wells, of the University's Institute for Sexual Minority Studies and Services, said the posters are "obviously not supported by any organization" and are coming down.

It's not that false accusations don't happen, or that the havoc they wreak isn't real. The problem is the idiotic defensive assumption that a campaign expressly created to educate men and women about consent merits a hateful, finger-pointing response. And it makes the classic presumption that getting drunk, hooking up and then crying rape is a standard chick operating procedure -- an idea that is based, by the way, on no solid statistical evidence.

The "anti-feminism" Men's Rights group has happily seized upon the attention its stunt has gained, obscenely comparing its cause to the death of Emmett Till. But the murder of Till was not about "rape hysteria" or "MALE human rights," geniuses. And when you say, "Sexual violations, including rape, can be committed by anyone. While a majority of reported sexual assaults are committed by men, associating or claiming all men are potential rapists is analogous to claiming all minorities will commit theft," I'm almost too bored by the spectacular, lazy stupidity on display here to comment. I'll just say this – nobody thinks all men are potential rapists. Talking about rape isn't the same as accusing anybody of rape. And when there's a public awareness campaign to address the kind of thinking that leads to guys deciding that an unconscious female is fair game to sexually assault, a campaign that seems to have successfully reduced crime, that is a good thing. Tellingly, a member of the Men's Rights group who identifies only as "Raz" told the Star this week, "This is something that has negatively impacted my family and my life and nobody is talking about it."

There will always be those who pitch a fit whenever an issue that touches a nerve is confronted head on. They will get defensive whenever violence or sexual assault are addressed, leaping into the fray to shout, "Women abuse too! Women LIE!" Easy there, sports. There's no vast man-hating conspiracy. That's not what these campaigns are about. And if in your egomania and paranoia you've chosen to view them that way, that's your problem. But don't inflict it on others. Don't paper the town with your tin-foil hat rhetoric about how false rape is as big a problem as real rape, or your theory that any reported sexual assault involving drugs or alcohol must be some feminist revisionism of a consensual act. Don't put your crap on everybody else. Because it just makes you seem like the thing you seem to despise most – self-appointed victims.